SpaceX staff and members of the media have been inundated this morning with emails ostensibly from concerned Armenians around the world, asking the company to cancel a launch contract with the Turkish government. The concerns are valid — and the mass-email method surprisingly effective.

In the form email, received by TechCrunch staff hundreds of times in duplicate and with minor variations, the senders explain that they represent or stand in solidarity with Armenians worldwide, an ethnic and national group that has suffered under the authoritarian rule and regional influence of Turkey’s President, Tayyip Erdogan.

SpaceX is slated to launch the Turkish satellite Turksat-5A in the next month or two, a geostationary communications satellite built by Airbus that will serve a large area of Europe, Asia, and the Middle East. The deal has been on the books for a long time, and SpaceX CEO and founder Elon Musk even traveled to Turkey to meet with Erdogan regarding the satellite in 2017.

To enter into the complexities of the long conflict in which Armenia, Azerbaijan, Turkey, and nearby countries and powers have figured is beyond the scope of this article, but it is hardly controversial to say that there have been serious human rights abuses under Erdogan’s regime and others. The word “genocide” is frequently used.

Turkish President Erdogan calls for boycott of US tech

As the email plea points out, many countries and governments have opted to condemn Turkey’s behavior, and some companies have stopped doing business with the government. Will SpaceX join them?

At this stage — a month before launch, when the payload is likely already locked in — it seems unlikely that SpaceX will return the millions of dollars Turkey has no doubt already paid it, in order to appear more ethical by deplatforming, as it were, the government there.

But the campaign raises a legitimate question that is increasingly faced by new tech-focused companies growing to encompass a global community that is diverse and at times difficult to navigate. Where do companies like SpaceX — or Apple, or Google, or Facebook, or for that matter Airbus — draw the line? Should SpaceX be disinterested and mercenary, simply providing services to anyone who pays? Or are there some governments or people whose money it will not take?

So far SpaceX hasn’t had to walk too narrow a path on that front; the launch industry is heavily weighted toward military and government contracts, so the deal is already made with that particular devil. But as it becomes more established and can be a bit more choosy with its customers, it may consider acting as a gatekeeper in the industry where 10 years ago it was a gatecrasher. 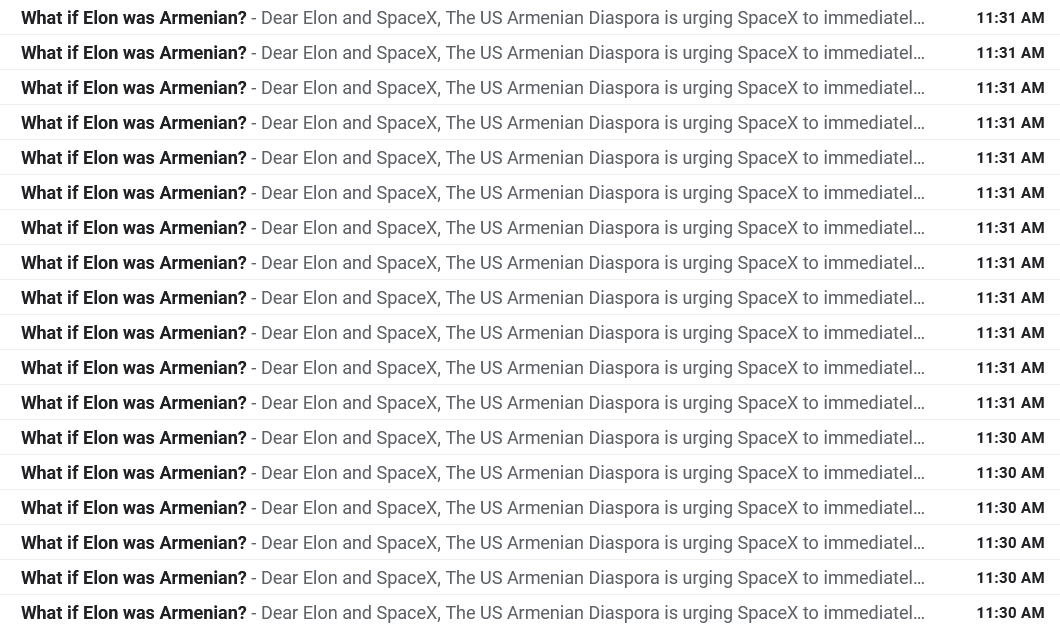 As for the email campaign, TechCrunch staff were surprised at its effectiveness in eluding Google’s spam filters. I contacted the person listed in the email as the originator of the campaign, who did not identify themselves beyond being part of the “Artsakh Strong” movement, for more information and to be removed from future emails (which I was).

The person explained that the emails were sent by individuals, not from a central location, which despite their duplicative content may account for their all making it to our inboxes. “These are people who are coming together to make their unified voice heard,” she wrote. ” We are not affiliated with any groups but our message is one shared by every Armenian American. I apologize for the inconvenience of you having to delete excessive emails but our people are being murdered on a daily basis and we need to bring attention to our cause.”

She suggested that as an American company, SpaceX should embody the country’s (supposed) values and refuse to do business with regime’s like Erdogan’s. Furthermore, she noted that SpaceX receives a great deal of funding and business from the U.S. government, which amounts to a secondhand blessing of its deals as being in the public interest.

“There are calls for sanctions of Turkey by the US and other NATO countries,” she wrote. “SpaceX is strongly urged to take all these factors into consideration and decide for itself whether or not it wants to continue to aid Turkey in the face of such overwhelming and clear evidence of criminal actions. At the very least, Elon Musk and SpaceX can halt the launch to see what these investigations lead to. While this may be a loss of profit for SpaceX it would be a huge leap for world progress.”

Artsakh Strong raises legitimate points that many companies providing services internationally must address or have their intentions inferred from their actions. This cannot be the first, nor will it be the last, that SpaceX or any of the new generation of space companies will have to make a difficult choice. At the very least they might explain why they choose how they do.

(Update: Artsakh Strong, which refers to the Republic of Artsakh, was originally identified as an individual in this post rather than a movement. This has been corrected and my ignorance exposed.)