Internships are an opportunity for students to experiment with new career paths and land a full-time offer ahead of graduation. For companies, the weeks-long programs help recruit and train job-ready hires.

While the stakes are high, the coronavirus-spurred office closures and market volatility made a number of tech companies slim down or cancel their internship programs. Similar to remote schooling, the startups that kept their programs had a huge hurdle to face: How do you teach and train students across the world about your company?

That’s where Symba, a Techstars alum, comes in. The 12-person startup created a white-label software tool to help companies, including Robinhood and Genentech, create an online space to communicate and collaborate with their now-distributed interns.

Tech’s coveted internships are getting canceled due to COVID-19

“Every year, organizations are reinventing the wheel and starting their internship program from scratch,” Ahva Sadeghi, CEO of Symba, said. “It’s like, you’re spending so much money, this is a core part of your recruitment, but you’re not invested in an infrastructure to make sure it’s sustainable.”

Symba sells a plug-and-play workspace for both interns and managers. Interns sign into Symba through a branded landing page and are brought into a workspace. They can then toggle between feedback, community, profiles and projects. There’s also an entire area for onboarding tutorials and company history. 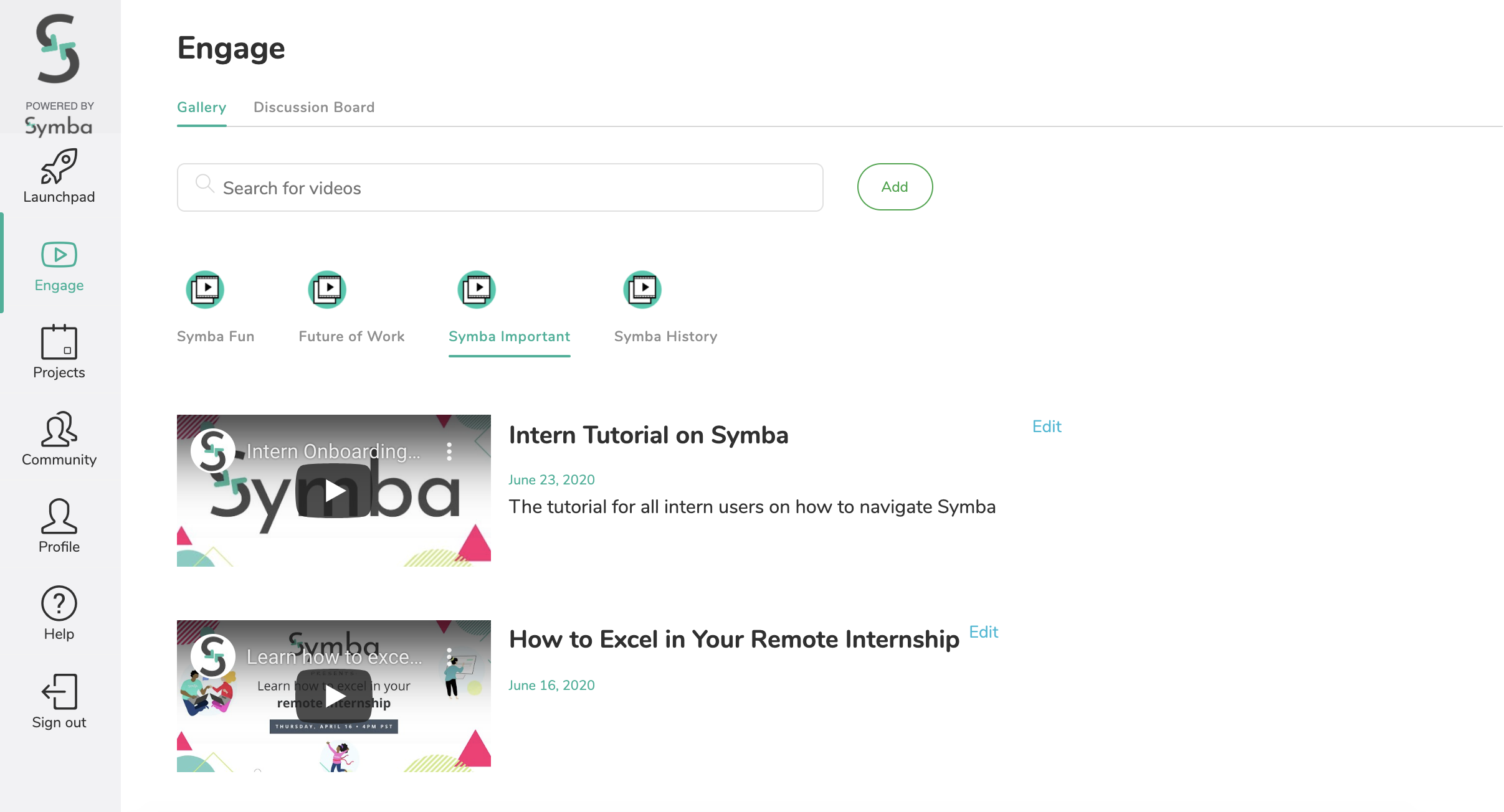 Interns are brought to a workspace upon login. Image via Symba.

Sadeghi is joined by co-founder and CTO Nikita Gupta, who built the entire site from scratch.

Symba was built with a big focus on creating channels for feedback between interns and managers. There is a tab dedicated solely to feedback, where managers can consistently rank their direct reports on a five-star rating scale across various skills. Interns are also able to request feedback.

Each user is invited to create a profile so other interns can reach out and learn about their cohort. While Symba wants to be where interns live during their internship, there’s no direct messaging mechanisms within the web-based platform. Instead, Symba has embedded a Slack integration for users who want to talk directly. 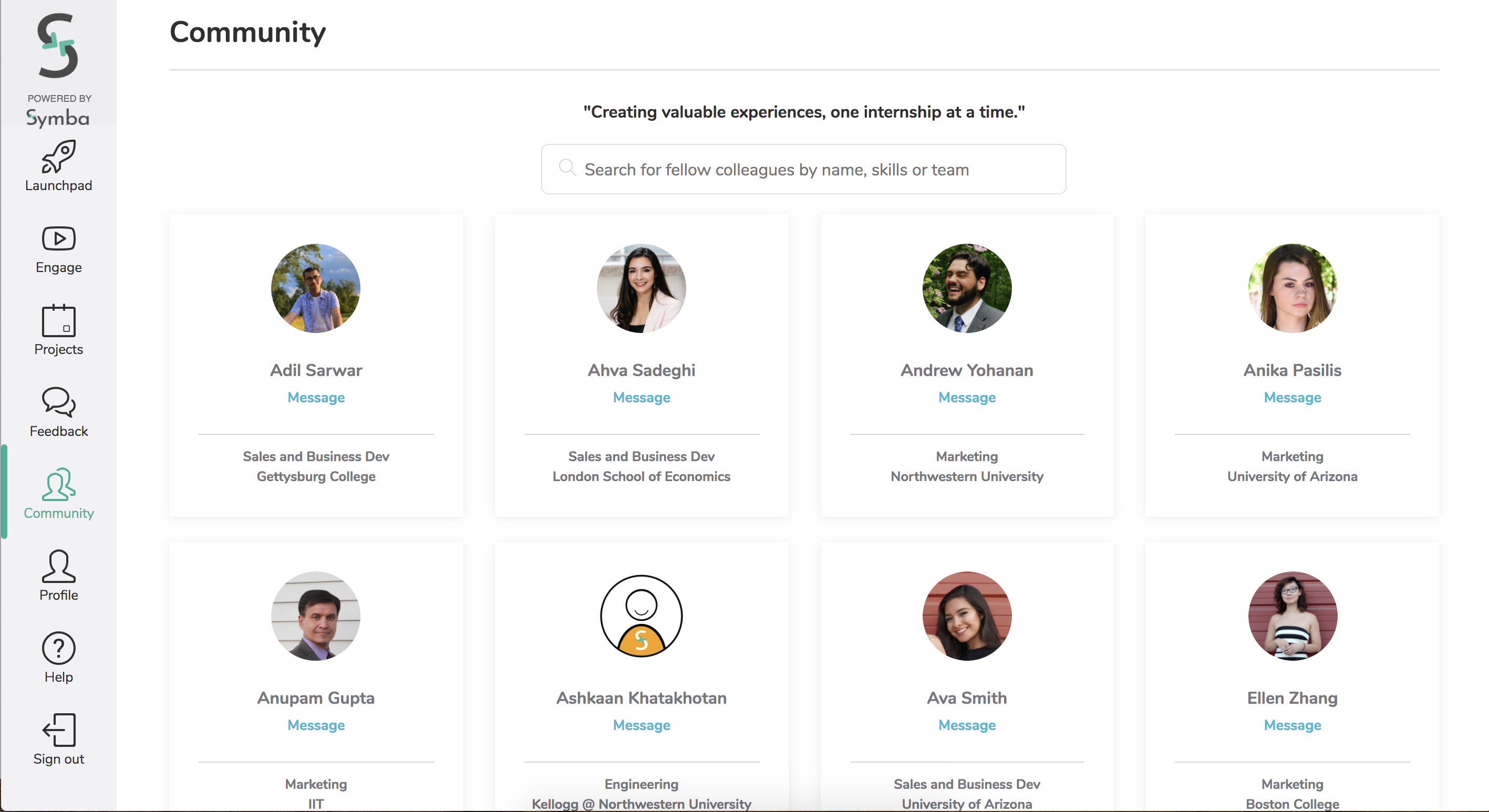 The community board allows interns to meet other interns and chat. Image via Symba.

Managers, on the other hand, are able to log in, assign tasks and check on progress for their direct reports. Feedback is also tracked during the entirety of the internship, to help see who has made progress and deserves a potential return offer.

Because interns come in for only eight to 12 weeks, she says the traditional internship onboarding process — which includes bringing them all onto a company’s full-time tech stack — could create chaos for the organization. Symba wants to be a low-lift alternative.

Sadeghi says that customers have been attracted to the alumni features in their platform, which allow managers to engage interns after the program is complete. The applicant-tracking system works to keep potential hires in the fold of the company.

So far, Symba is optimistic that the tool is working. Users log into the product an average of six to nine times per day, and there have been more than 15,000 intern-projects created on Symba.

The company declined to disclose revenue, citing the stage of its business, but said that it charges companies $30 to $50 per user per month for the product. The average size of a Symba cohort is 80, but they have had customers who bring more than 2,000 interns onto the product. It only works with companies who pay their interns.

A hurdle of Symba will be the seasonality of its revenue. Because most internships are in the summer, Symba will likely find most growth opportunities during that three-month period.

Symba’s early growth is directly related to the pandemic, as the fear of the virus closed offices, and, in turn, shuttered internship programs. Symba’s success will hinge on if the team can convince companies that an online workspace for interns is a necessary product even when offices reopen.

Beyond translating into a post-pandemic world, Symba wants to be a solution for clients such as bootcamps, accelerators or fellowships. If it’s able to land year-round clients, it will be able to balance the seasonality of its current revenue of summer internships.

The success so far is promising: Early momentum has helped Symba raise $750,000 from a number of investors, including 1517 Fund, January Ventures and Hustle Fund.