The web of collaboration apps invading remote work toolkits have led to plenty of messy workflows for teams that communicate in a language of desktop screenshots and DMs. Tracing a suggestion or flagging a bug in a company’s website forces engineers or designers to make sense of the mess themselves. While task management software has given teams a funnel for the clutter, the folks at Jam question why this functionality isn’t just built straight into the product.

Jam co-founders Dani Grant and Mohd Irtefa tell TechCrunch they’ve closed on $3.5 million in seed funding and are ready to launch a public beta of their collaboration platform which builds chat, comments and task management directly onto a website, allowing developers and designers to track issues and make suggestions quickly and simply.

Like most modern productivity suites, Jam is heavy on integrations so users aren’t forced to upend their toolkits just to add one more product into the mix. The platform supports Slack, Jira, GitHub, Asana, Loom and Figma, with a few more in the immediate pipeline. Data syncs from one platform to the other bidirectionally so information is always fresh, Grant says. It’s all built into a tidy sidebar.

Grant and Irtefa met as product managers at Cloudflare, where they started brainstorming better ways to communicate feedback in a way that felt like “leaving digital sticky notes all over a product,” Grant says. That thinking ultimately pushed the duo to leave their jobs this past May and start building Jam.

Why I flip-flopped on opposing remote work

The startup, like so many conceived during this period, has a remote founding story. Grant and Irtefa have only spent four days together in-person since the company was started, they raised their seed round remotely and most of the employees have never met each other in-person.

The remote team hopes their software can help other remote teams declutter their workflows and focus on what they’re building.

“On a product team, the product is the first tab everyone opens and closes,” Grant says. “So we’re on top of your product instead of on some other platform” 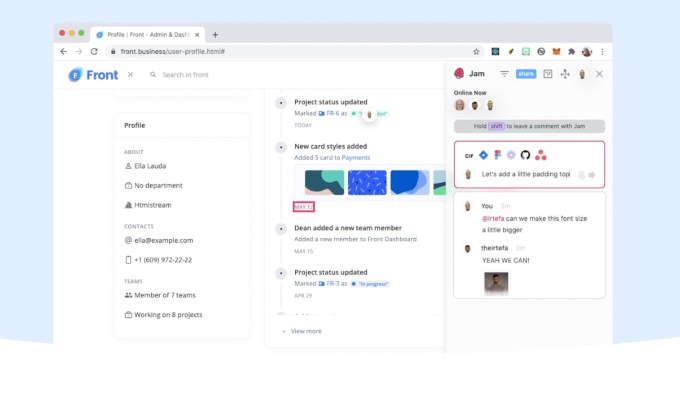