Google Photos is reviving its photo printing subscription service and introducing same-day prints. The company earlier this year had briefly tested a new program that used A.I. to suggest the month’s 10 best photos, which were then shipped to your home automatically. But Google ended the test on June 30.

During the trial, Google had offered users a $7.99 per month subscription that would automatically select 10 photos from one of three themes, including people and pets, landscapes, or “a little bit of everything” mix. The 4×6 photos were printed on matte, white cardstock with a 1/8-inch border. 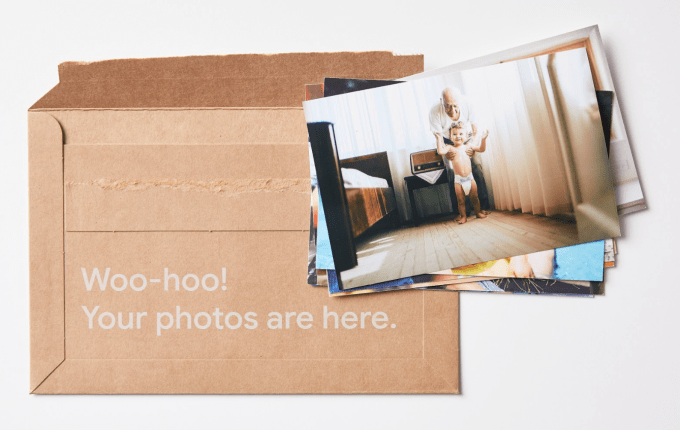 The new subscription, launching soon, leverages feedback from the early tests to now give users more control over which prints they receive and how they look. It also drops the price to $6.99 per month, including shipping and before tax.

With the new Premium Print Series, as the subscription is called, Google Photos will use machine learning techniques to pick 10 of your recent photos to print. But users can edit the photo selection and they can choose either a matte or glossy finish or add a border before the photos ship.

The photos can optionally be turned into postcards, thanks to the cardstock paper backing, Google notes.

Subscribers can also opt to skip a month and can easily cancel the service, if they’re no longer using it.

This updated version of service was recently discovered by reverse engineer Jane Manchun Wong, who detailed the new customization options and the lower price point.

a subscription service for shipping prints of your photos that Google suggested for you monthly for $6.99/month… nice!

the finish and border are adjustable. you can also skip a month of prints if you’d like

Google says the Premium Print Series will make its ways to Google Photos users in the next few weeks.

In addition to prints and subscriptions, Google Photos continues to offer canvas prints and photo books — the latter now with up to 140 pages — as part of its online print store.

The launch of the expanded photo printing services and subscription comes at a time when people are traveling less often, due to the pandemic, and are attending fewer large events where photo-taking may take place — like parties or concerts, for example.

But even if times have changed, people are continuing to take photos — though they may not be posting them across social media in order to avoid judgement.The subject of the photos may have changed, too, to now include more family and pets or nature scenes, instead of large, crowded places or big social gatherings, for instance.

The nostalgia for pre-pandemic times could see users turning to prints to help them relive fond memories, too.

Google didn’t say exactly when the new subscription will launch, but said users should be able to access the feature in the coming weeks.