In Y Combinator’s early days, founders would move to Palo Alto, split a two-bedroom with five others to save money and trade notes around the clock with their new, like-minded roommates.

Now, as remote work continues and the pandemic persists, scores of entrepreneurs are working from home around the world. Y Combinator isn’t requiring its recent cohorts to relocate and collaboration is a screen-to-screen affair.

Now that they can work from literally anywhere, many entrepreneurs are forming homes with other founders. Hacker homes, the newest iteration of remote work adaption, feels like a nostalgic attempt to recreate some of the synergies COVID-19 wiped out. Generally speaking, it’s a nod to the digital nomad lifestyle, but in some cases, hacker homes feel closer to Hype House, a TikTok mansion laden with sponsored indulgence and wealth.

For Greg Isenberg, a growth advisor to TikTok and former head of strategy at WeWork, entrepreneur homes are a signal of what the foreseeable future of building could look like.

“The type of vibe you used to get from Y Combinator just doesn’t exist anymore,” Isenberg said, as these houses could recreate some of the scrappiness and like-mindedness that defined the incubator’s early days.

In other words, sometimes there’s a cost to after-work happy hours making a comeback.

Product Hunt, and then TikTok

Michael Houck, a former product manager at Airbnb and Uber, rented a home in Tulum, Mexico in May 2020. He put $21,000 of non-refundable money on his credit card and invited friends and people he met on the internet before hopping on a plane. Anyone who came had to be okay with a few rules: you must pay rent, launch projects and you have to be okay with building your company in public.

In all, 18 entrepreneurs, including Houck, formed The Launch House. Residents include former startup fellowship participants from On Deck, product managers and solo entrepreneurs. On the plane ride over, house founder Brett Goldstein launched its first tool. 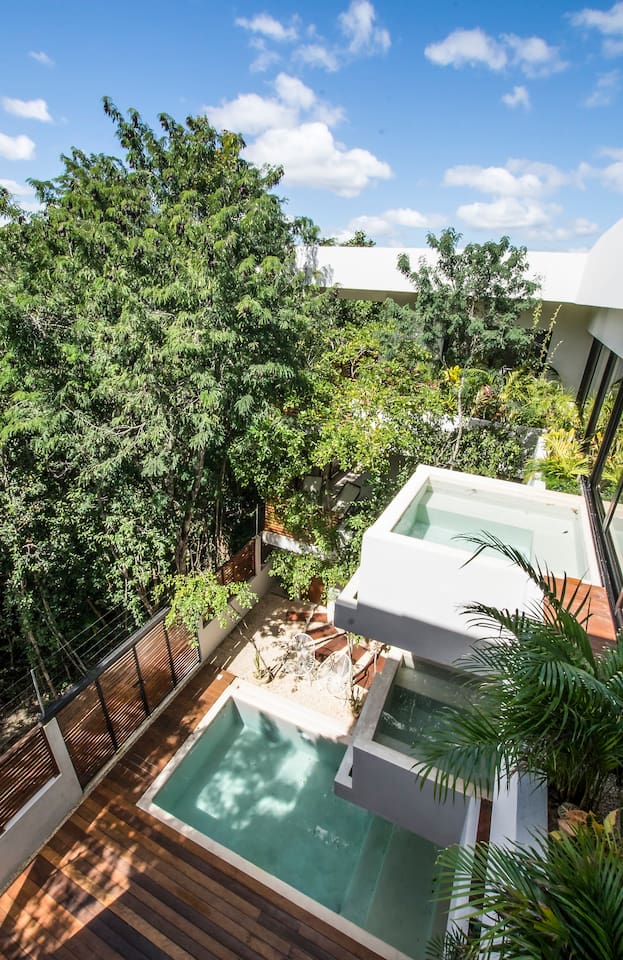 Habitants of the Launch House use the pool for recreation and brainstorm sessions, called “pool-storms.” Image Credits: The Launch House

“How do you actually launch a consumer product? You need wide reach, influence, community and media properties all together,” Goldstein said. “I wouldn’t say we’re the next Y Combinator, but the next YC would look something like that.”

In just a few weeks, The Launch House has produced nine products, including a discovery platform for the best OnlyFans accounts, an anonymous Twitter bot that sends positive comments and tools that enhance newsletter and email reading experiences.

Launch House members described a strong focus on inclusion when populating future homes and just opened up the application process for Launch House 2. One way the house is trying to give access to other people is by open-sourcing information and projects that residents build together.

The website has a Launch Library where builders can submit their email addresses to access resources on how to build anything from a podcast to a clothing brand to a community.

“There’s this sort of veil of mystique that surrounds a lot of entrepreneurs and founders,” Goldstein said. “The curtain has been lifted, and now you can get a social media perspective, and inside look at what it takes to start and launch a company.”

Now, more than 1,500 people are on the Launch House waitlist. Multiple investors have approached the group to sponsor internal and external events and some companies have even asked for the right to do product placements.

The concept has surely brought in an audience, and copycats: an unaffiliated group called The Rocketship House posted a trailer on Twitter in October:

When reached via e-mail, organizers of Rocketship House declined to answer specific questions about the launch, or as they put it, “blast off.” The group confirmed that it is funded by a few unnamed large investors based in Beverly Hills, and includes a mix of marketers and influencers that invest in social media. It is currently accepting applications, drawing itself as similar to a TikTok mansion.

“Similar to Sway House [a residence for TikTok personalities], we will be making fun and dramatic dope bro content, centered around launching startups. We all live exciting lives, and there’s plenty of drama, so we’re excited to showcase that,” the e-mail from Rocketship House read.

Not all entrepreneur homes are following suit in terms of strategy, for more reasons than one.