Spotify today has released its highly-anticipated iOS 14 widget with the latest app update. The new widget, which comes in both the small and medium sizes for the time being, allows you to quickly access your recently played artists, albums and podcasts with a tap.

The smaller widget will display just your most recently listened to item, while the medium-sized widget will instead show the five most recent items — four in a horizontal row and the most recent at the top. In that case, you can actually tap on the small thumbnail for which of the five you want to now stream to be taken directly to that page in the Spotify app.

Another interesting aspect to the widget is that the background color automatically updates to match the thumbnail image. If the artist is wearing red, for example, the widget changes to red. If the album is blue, the widget becomes blue. And so on.

There seem to be a limited range of colors available, however. For example, when we streamed something with a gray-and-white color scheme in the thumbnail image (e.g. Taylor Swift’s “folklore”), the widget defaulted to Spotify’s green shade. 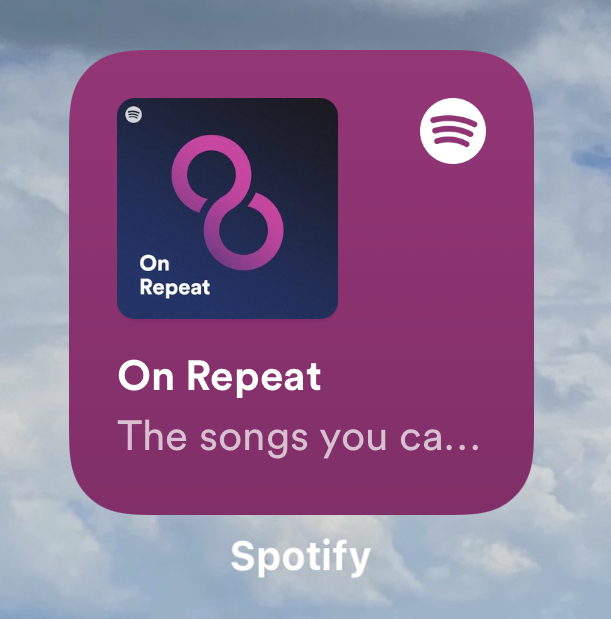 The widget’s colorful experience can help it stand out on the home screen. But it could also be problematic for those who have customized their iOS 14 home screen with a certain aesthetic — like all app icons and widgets in neutral shades, or another favorite color, such as pink, purple, blue or black.

Based on Etsy trends, iOS 14 packs in neutral or fall shades are currently best sellers, as are those with lighter pinks and dark themes in black. Spotify’s widget could clash with those designs, at times.

Still, the demand for a Spotify widget has been so strong that before the official release it sent a third-party music widget provider flying up the App Store charts as users customized their iOS 14 home screens. That widget provider, TuneTrack, even got as high at No. 8 Overall and No. 1 in Music on September 19, 2020, when the customization trend was driving millions of new downloads.

The new Spotify widget is live today within the updated Spotify app on the iOS App Store.