Google is putting AI and machine learning technologies into the hands of journalists. The company this morning announced a suite of new tools, Journalist Studio, that will allow reporters to do their work more easily. At launch, the suite includes a host of existing tools as well as two new products aimed at helping reporters search across large documents and visualizing data.

The first tool is called Pinpoint and is designed to help reporters work with large file sets — like those that contain hundreds of thousands of documents.

Pinpoint will work as an alternative to using the “Ctrl + F” function to manually seek out specific keywords in the documents. Instead, the tool takes advantage of Google Search and its AI-powered Knowledge Graph, along with optical character recognition and speech-to-text technologies.

It’s capable of sorting through scanned PDFs, images, handwritten notes and audio files to automatically identify the key people, organizations and locations that are mentioned. Pinpoint will highlight these terms and even their synonyms across the files for easy access to the key data. 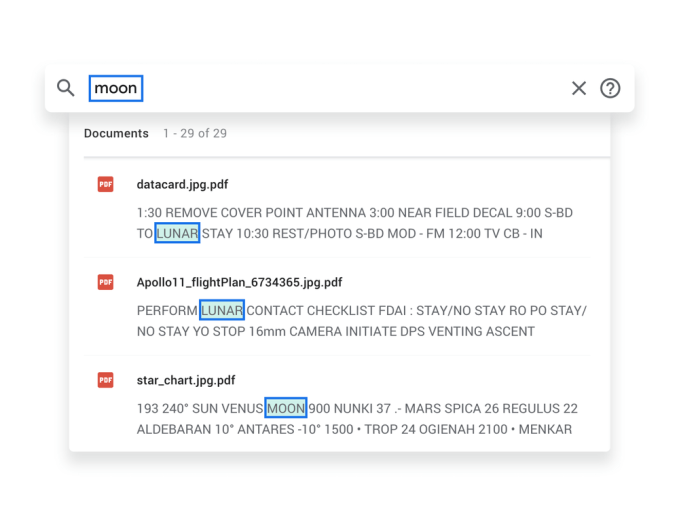 The tool has already been put to use by journalists at USA Today, for its report on 40,600 COVID-19-related deaths tied to nursing homes. Reveal also used Pinpoint to look into the COVID-19 “testing disaster” in ICE detention centers. And The Washington Post used it for a piece about the opioid crisis.

Because it’s also useful for speeding up research, Google notes Pinpoint can be used for shorter-term projects, as well — like Philippines-based Rappler’s examination of CIA reports from the 1970s or Mexico-based Verificado MX’s fast fact checking of the government’s daily pandemic updates.

Google has also partnered with The Center for Public Integrity, Document Cloud, Stanford University’s Big Local News program and The Washington Post to create shared public collections that are available to all users.

The second new tool being introduced today is The Common Knowledge Project, still in beta.

The tool allows journalists to explore, visualize and share data about important issues in their local communities by creating their own interactive charts using thousands of data points in a matter of minutes, the company says.

These charts can then be embedded in reporters’ stories on the web or published to social media.

This particular tool was built by the visual journalism team at Polygraph, supported by the Google News Initiative. The data for use in The Common Knowledge Project comes from Data Commons, which includes thousands of public data sets from organizations like the U.S. Census and the CDC.

At launch, the tool offers U.S. data on issues including demographics, economy, housing, education and crime.

As it’s still in beta testing, Google is asking journalists to submit their ideas for how it can be improved.

Google will demonstrate and discuss these new tools in more detail during a series of upcoming virtual events, including the Online News Association’s conference on Thursday, October 15. The Google News Initiative training will also soon host a six-part series focused on tools for reporters in seven languages across nine regions, starting the week of October 20.

The site additionally points to other services from Google, like Google Drive, Google Scholar, Google Earth, Google News and others, as well as training resources.

Update: We’ve got some more details from a demonstration by Megan H. Chan, Google’s news ecosystems lead. Chan previously served as an editor and digital executive at publications like Politico and The Washington Post, and she recalled moments when reporters would get access to a large trove public records — those documents could be crucial, but it was also a huge chore to go through them.

Pinpoint is designed to make the process simpler by identifying the people, organizations and locations that are mentioned most frequently, and to make it easy to jump to each of those references. Chan noted that this should be less tedious than simply hitting CTRL-F over and over again for different terms. And because it uses Google’s Knowledge Graph technology, Pinpoint can also find group related terms, or distinguish between two similar-looking ones, such as “John F. Kennedy” and “John F. Kennedy, Jr.”

Chan added that these tools are “no replacement for a human journalist,” but they can make those journalists more effective. And she suggested that this could be useful during the fact-checking process, allowing journalists to more quickly and reliably back up their assertions with editors, rather than simply relying on their notes.