Fertility tracking has seen an explosion of startup activity in recent years. Femtech startup Lady Technologies is adding to this rich mix with the full U.S. launch of a dual-purpose device, called kegg, that’s designed to measure hormonal changes in a woman’s cervical fluid to help her determine the chance of conception on a given day.

The egg-shaped gizmo, which features a gold-plated steel cap and band ringing its tip, as well as a silicone tail to house its Bluetooth radio (so it can chat to the companion app), doubles as a connected pelvic floor trainer (the “k” in kegg is for “Kegels”) — taking a leaf out of U.K. femtech pioneer Elvie’s playbook. Though the two-in-one function is a new twist.

Kegg relies on a technology called impedance to sense electrolyte levels in a woman’s cervical fluid in order to detect the hormonal switch from estrogen to progesterone dominance that accompanies ovulation — via a daily test that’s touted as taking just two minutes. (If you’re also using it for the optional Kegal exercises that would take a bit longer.)

“A minute electrical impulse at a specific frequency is emitted from the gold-plated electrodes on the kegg and received by the other (this process is then reversed). By sensing the changing trends in the impedance, we’re able to detect the hormonal change and make a prediction to the user,” explains CEO and founder Kristina Cahojova. “Since every woman’s fluids are slightly different, kegg needs to record at least one fertile window to provide personalized predictions.”

“We have numerous patents on the underlying design of kegg and key aspects of how it operates,” she adds.

Kegg was unveiled on the TechCrunch Disrupt SF stage, back in 2018, as part of our startup battlefield competition (though it didn’t go on to win). Fast-forward two years and it’s now officially launching out of beta to offer the FDA-registered gizmo to the U.S. market — priced at $275.

It’s announcing a $1.5 million seed round too, with investors including Crescent Ridge Partners, SOSV, Texas Halo Fund, Fermata Fund and MegaForce, as well as some unnamed angel investors.

Commenting in a statement, Samina Hydery, kegg advisor and women’s health investor, said: “Investor interest in femtech and fertility has accelerated over the last few years. While I’ve seen an influx of ovulation prediction kits, at-home blood tests, menstrual tracking apps, and temperature monitors in the consumer market, kegg’s value proposition became clear once I spoke with women about their experiences trying to conceive and medical researchers in the field. It’s hard not to get excited by the various growth vectors that can expand kegg’s market in the future — from being used as a tool for natural family planning to helping monitor postpartum/perimenopausal health.”

“We pride ourselves in having almost half of our investors women,” notes Cahojova — whose inspiration for building kegg was personal, having suffered from irregular menstrual cycles herself.

“I didn’t want to be treated with hormones. When I talked to fertility instructors or a specialized fertility doctor, all they wanted to know about was my patterns of cervical fluid. Why? Because the fertile window is defined only by the presence of fertile cervical fluid, having a positive LH [luteinizing hormone] test is nice but it won’t help you get information to fix your cycles. That’s why so many fertility doctors are interested in cervical fluid and that is why so many women are told to track it with their fingers,” she explains.

“How on earth are you supposed to be able to track objectively something so important, yet private, without the help of technology? I was frustrated and angry that every company that I talked to didn’t have a solution and didn’t want to make this so-needed product because it ‘would have to go into the vagina’. So I set out to make a product that would help me and women like me.”

Thus far kegg has been hitting a chord with U.S. women of reproductive age who are trying for a baby, according to Cahojova — who says her startup has built a 2,000-strong community of fertility-tracking women over kegg’s beta period.

“Our typical user is a woman in her reproductive age,” she says. “Our users are in long-term relationships or married and they likely have been actively trying to conceive for more than three months. Fifty percent are trying to conceive their first child, while the remaining are already mothers.

“Our customers have experience with BBT (body basal temperature charting) or LH tests (ovulation tests) and they are overall interested in holistic fertility and wellness, not in medication. They also prefer the convenience of kegg over other methods that either need to be worn throughout the night or used more frequently.” 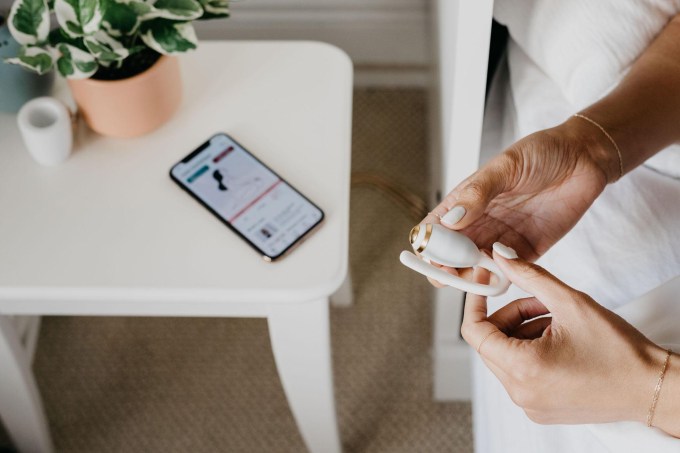 “Each woman is unique and so are her cycles,” she adds. “Unlike ovulation trackers, kegg helps women understand their fertile window and cyclical fertility and follow their own patterns. Usually women take up to six months to learn how to read cervical fluid patterns. Our customers report that kegg gives them confidence and they feel empowered. Many keggsters conceived with kegg after years of trying because kegg gave them trends beyond ovulation. Nothing makes me more happy than an email from a customer whose life changed thanks to my work and kegg.” (On that it says “several” women have reported successful pregnancies using kegg since the beta launch in 2018.)

The startup also has its eye on international expansion, including to Asia (with the support of its Japanese market-focused investor Fermata) — with a plan to launch kegg in Singapore in late October, and in Japan and Canada next year.

While the kegg has a core focus on fertility tracking (and a secondary feature as a connected pelvic floor trainer), Cahojova is excited about wider possibilities for women’s health that she hopes will be opened up as they’re able to take in and crunch more data.

Kegg users’ impedance readings are uploaded to the startup’s cloud for analysis, so its algorithms can make a personalized fertility prediction. But its website also notes it uses “anonymized/pseudonymized” data for research into women’s health. (Cahojova specifies users’ personal data is never shared outside the company. “Any data we offer to researchers we work with is completed anonymized,” is her privacy promise.)

Asked what areas of research she’s hoping kegg will help advance, she tells us: “Researchers have noted that health issues can affect typical electrolyte cycles. In many of our internal studies we’ve seen examples where readings were ‘out of norm’ for the user. In case after case we found evidence of underlying health issues (for example infections) were the cause. In the future our goal is to understand how kegg can help monitor overall cervical health.”

Cahojova also says the device is being used by fertility instructors and doctors to help with monitoring their patients. “The beauty of kegg is that by having a user-friendly and modern device that women like to use we can get data on changes of vaginal fluids on a large scale. With kegg data we also hope to help doctors finally answer their billion-dollar question — how can they improve the quality of cervical fluid.”

“We are supportive of science and are open for research collaborations,” she adds. “We provided kegg for independent peer-reviewed clinical study under Dr. Gabriela López Armas, MD, PhD, for her research on kegg and other fertility trackers. All the participants finished the protocols in summer of 2020 and the study is to be published independently in the near future.”

While the business model for kegg is currently fixed-price hardware sales, Cahojova says the startup is looking at offering subscription packages in the future. “In the future, we want to offer more to our users, e.g.: connecting them to specialists to review their cycles or view of additional layers of information. Once we have enhanced services ready, we’ll look at switching to a subscription model,” she adds.