Earlier today Apple announced a slew of new hardware. In case you’ve not yet caught up, there’s a $99 HomePod Mini coming, new iPhones, a new method for shouting at your electronics, the return of MagSafe, some cost-cutting masquerading as environmentalism and, of course, new flagship phones.

And in a move that caused telecom investors to sit up straight and pay attention, Apple trotted out Verizon CEO Hans Vestberg for part of the presentation — which is why we add our parent company’s parent company to our usual post-Apple-event share price reaction roundup.

Here’s everything Apple announced at its ‘Hi, Speed’ iPhone event

Shares of Apple were mixed before the event, managing to work their way back to flat during morning trading ahead of the event. Down before Apple kicked off its iPhone shebang, equity in the phone giant dipped and then rallied as the event got underway.

But the partial erasure of losses was short-lived, and Apple wound up losing ground during the presentation (chart via YCharts, annotations via TechCrunch): 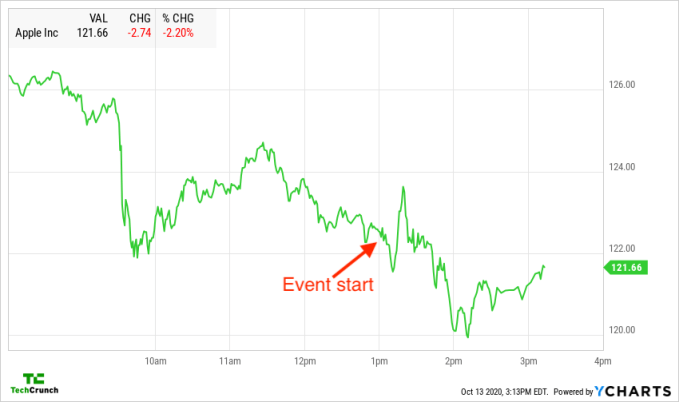 For Apple shareholders then, not a day worth writing home about.

The Apple event appeared to have a more electric impact on my employer. See if you can spot the point at which Verizon appeared as part of the event (chart via YCharts, annotations via TechCrunch): 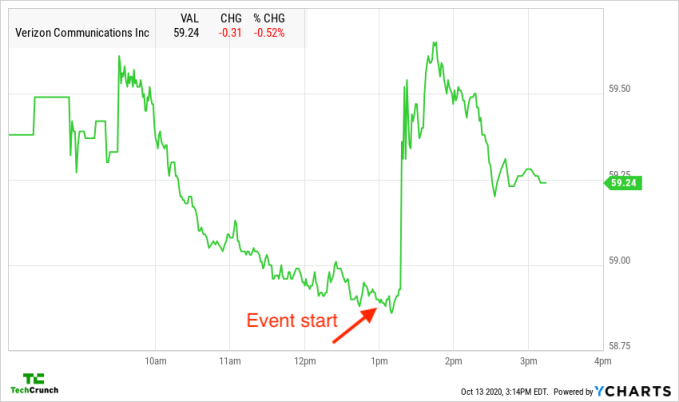 Now that is the sort of reaction that we hope to see from events of this sort. Why? Because it implies that the company on stage has managed to do something so notable that its share price moved; this is another way of saying that investors were surprised by what they learned.

Apple events tend to leak in advance these days, so perhaps the usual lack of share price movement from the company’s equity is to be expected.

Here’s how Apple’s stock fared during the WWDC keynote

Verizon’s news, in contrast, was more of a surprise. The company “announce[d] its nationwide 5G network” in the words of The Verge. Investors liked that, but later sold the company’s shares back down a bit.