Helicopter parenting turned into surveillance with the debut of family-tracking apps like Life360. While the app can alleviate parental fears when setting younger kids loose in the neighborhood, Life360’s teenage users have hated the app’s location-tracking features so much that avoiding and dissing the app quickly became a TikTok meme. Life360 could have ignored the criticism — after all, teens aren’t the app’s paying subscribers; it’s the parents. But Life360 CEO Chris Hulls took a different approach. He created a TikTok account and started a dialogue with the app’s younger users. As a result of these conversations, the company has now launched a new privacy-respecting feature: “Bubbles.”

Bubbles work by allowing any Life360 Circle member to share a circle representing their generalized location instead of their exact whereabouts. To set a bubble, the user can adjust the radius on the map anywhere from 1 to 25 miles in diameter, for a given period of time of 1 to 6 hours. After this temporary bubble is created, Life360’s other existing safety and messaging features will remain enabled. But parents won’t be able to see precisely where their teen is located, other than somewhere in the bubble. 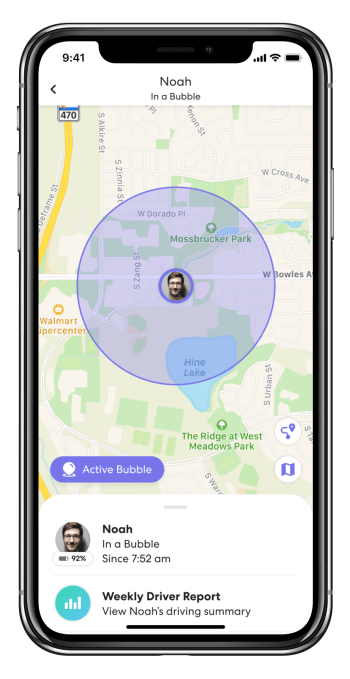 For example, a teen could tell their parents they were hanging out with some friends in a given part of town after school, then set a bubble accordingly. But without popping that bubble, the parents wouldn’t know if their teenager was at a friend’s house, out driving around, at a park, out shopping, and so on. The expectation is that parents and teens should communicate with one another, not rely on cyberstalking. Plus, parents need to respect that teens deserve to have more freedom to make choices, even if they will sometimes break the rules and then have to suffer the consequences.

A location bubble isn’t un-poppable, however. The bubble will burst if a car crash or other emergency is detected, the company says. A parent can also choose to override the setting and pop the bubble for any reason — like if they don’t hear from the teen for a long period of time or suspect the teen may be unsafe. This could encourage a teen to increase their direct communication with a parent in order to reassure them that they are safe, rather than risk their parent turning tracking back on.

But parents are actively discouraged in the app from popping the bubbles out of fear. Before the bubble is burst, the app will ask the user if they’re sure they want to do so, reminding them also that the member will be notified about the bubble being burst. This gives parents a moment to pause and reconsider whether it’s really enough of an emergency to break their teen’s trust and privacy. Similar nudges to direct user behavior are found on top social apps today. 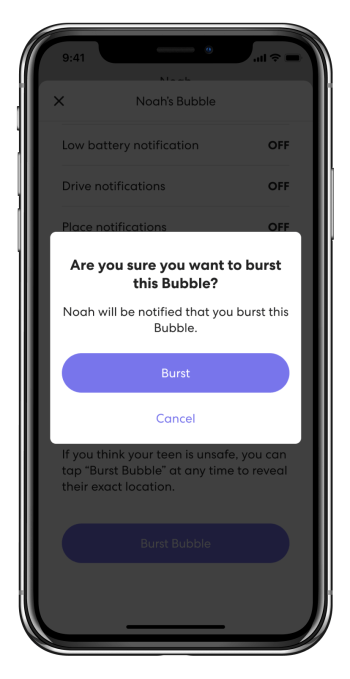 The feature isn’t necessarily going to solve the problems for teens who want to sneak out or just be un-tracked entirely, which is where many of the complaints have stemmed from in recent years. Instead, it’s meant to represent a compromise in the battle between adult surveillance of kids’ every move and teenagers’ needs to have more personal freedom.

Hulls says the idea for the new feature was inspired by conversations he had with teens on TikTok about Life360’s issues.

“Teens are a core part of the family unit — and our user base — and we value their input,” said Hulls. “After months of communicating with both parents and teens, I am proud to launch a feature that was designed with the whole family in mind, continuing our mission of redefining how safety is delivered to families,” he added.

Before joining TikTok, the Life360 mobile app had been subject to a downrating campaign where teen users rated the app with just one star in hopes of getting it kicked off the App Store. This is a method teens and school kids often use to express their displeasure with apps. (Apps are not automatically removed for low ratings, but that hasn’t stopped teens from trying this tactic with anything they don’t like, from Google Classroom’s app to the Trump 2020 app, at times.)

In his TikTok debut, Hulls appeared as Darth Vader, then took off the mask to reveal, in his own words, “just your standard, awkward tech CEO.” In the months since, his account has posted and reacted to Life360 memes, answered questions and asked for — and even paid for — helpful user feedback. One of the ideas resulting from the collaboration was “ghost mode,” which is now being referred to at launch as “Bubbles” — a name generated by a TikTok contest to brand the feature.

In addition to sourcing ideas on TikTok, Hulls used the platform to rehabilitate the Life360 brand among teens, explaining how he created the app after Hurricane Katrina to help families reconnect after big emergencies, for example (true). His videos also suggested that he was now on teens’ side and that building “ghost mode” was going to piss off parents or even lose him his job (highly debatable).

In a related effort, the company posted a YouTube parody video to explain the app’s benefits to parents and teens. The video, suggested to teen users through a notification, hit over a million views in 24 hours.

Some teens came around. “i’m crying he seems so nice,” said one commenter. “ngl it’s the parents not the app,” admitted another. Hulls’ “life360ceo” TikTok account has since gained over 231,000 followers and its videos have been “liked” 6.5 million times. Teens have currently turned their righteous anger back to where it may actually belong — at their cyberstalking parents, not the tech enabling the location-tracking.

Bubbles is now part of the most recent version of the Life360 app, a free download on iOS and Android. The company offers an optional upgrade to premium plans for families in need of extra features, like location history, crash detection and roadside assistance, among other things.

Family trackers are a large and growing business. As of June 2020, Life360 had 25 million monthly active users located in more than 195 countries. The company’s annualized monthly revenue was forecasted at $77.9 million, a 26% increase year-over-year.

To celebrate the launch of Bubbles, this past Saturday, Life360 launched a branded Hashtag Challenge on TikTok, #ghostmode, for a $10,000 prize. As of today, the hashtag already has 1.4 billion views.