Veritonic is announcing that it has raised $3.2 million in Series A funding led by Greycroft, with participation from Lerer Hippeau and Amazon-owned audiobook service Audible.

CEO Scott Simonelli, who founded the New York startup with COO Andrew Eisner and CTO Kevin Marshall, told me that his goal is to create a new category of “audio intelligence” — namely, measuring and predicting the effectiveness of any piece of audio content or advertising.

The company is focused on marketing initially, with its first product, Creative Measurement, analyzing any audio ad and showing marketers how it scores compared to similar content, as well as identifying which parts of the audio are most effective. And Veritonic is launching a new product, Competitive Intelligence, which helps businesses see how and where their competitors are spending on advertising and provides alerts when those competitors launch a new ad.

Simonelli said that until now, audio measurement has been limited to things like creating audience panels with a few hundred people, which simply doesn’t scale, given the enormous growth in the audio market.

Veritonic, on the other hand, has analyzed thousands of audio files, correlating the content with data about how people responded and using that analysis to predict how people will respond to new audio. Simonelli said the company can add more “fuel” by going out and gathering more human response data, but even without additional data, it can provide an instant prediction on an ad or campaign’s effectiveness. 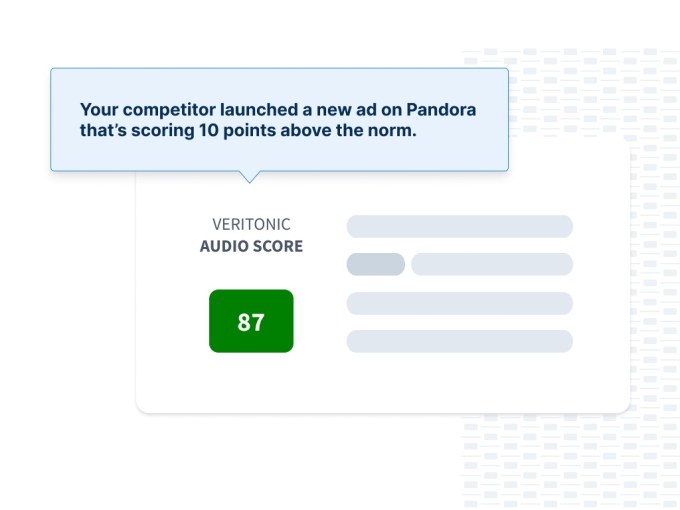 Simonelli also noted that Veritonic has spent the past five years developing technology that’s specifically attuned to the challenges of measuring audio effectiveness — like the fact that audio is experienced over time and, even more than other media, needs to be memorable.

“We can look at a sonic profile and predict and evaluate how somebody is going to respond,” he said.

The ultimate goal, he added, is to create the “benchmark for audio advertising,” which means working with a variety of players in the industry. For example, he said that when you look at other audio investments in Greycroft’s portfolio (such as podcast network Wondery or podcast analytics company Podsights): “Veritonic makes every one of those audio investments more valuable.”

Veritonic’s made pretty good progress on that goal already, with partners including Pandora, SiriusXM and NPR, and brand clients like Pepsi, Visa and Subway. It was previously backed by Newark Venture Partners (whose founder Don Katz previously founded Audible).

“We are excited to be a part of Veritonic’s continued growth and success,” said Greycroft’s Alan Patricof in a statement. “I’m personally very passionate about the future of voice, and the team at Veritonic deeply understands how to use audio to drive recall, stickiness and brand awareness — which is hugely important in a highly-competitive consumer brand landscape.”

Simonelli added that Veritonic will use the new funding to expand its data science and sales teams. Eventually, he hopes to start analyzing non-advertising content as well — for example, since Audible is an investor, he said, “Analyzing every audiobook on the planet is something we’re ready for and excited to do.”