Everyone in the world is rethinking shared spaces right about now, and part of that rethink is understanding how they’re used, minute by minute and day by day. Density’s tiny ceiling-mounted radar finds and tracks people unobtrusively but with great precision, letting the powers that be monitor every table, chair and office.

Okay, in some ways that doesn’t sound great. But don’t worry, we’ll get to that.

Density began looking into creating large-scale people-monitoring tech after seeing the possibilities latent in its entryway-monitoring Entry device, which tracks people coming and going using infrared imagery. They settled on radar as a technology that has the range and precision to cover hundreds of square feet from a single point, but also lacks any capability of easily identifying someone.

That’s an important point, as many are wary of installing people-monitoring software on ordinary security cameras. The potential for abuse is high simply because the imagery is easy to match with identities. So while it may be cheaper to layer some computer vision on top of a regular camera, there are non-trivial risks and shortcomings. 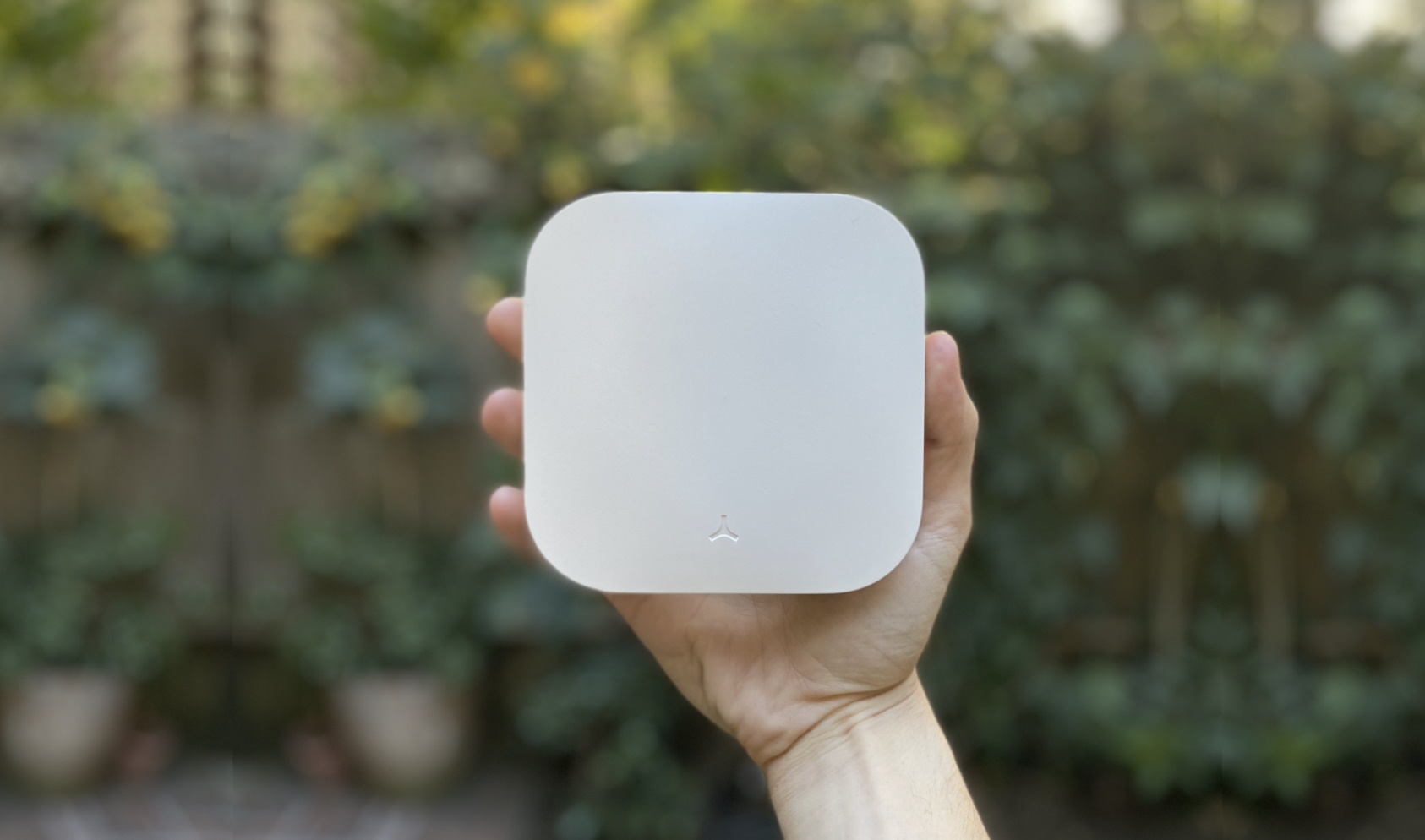 Not to mention few like the idea of security cameras watching over every desk and computer, able to read confidential documents and see every minute motion. The system Density has created is very much focused on presence — is someone in that chair? Is someone in that office? How many people are in this room?

The radar produces point clouds, but not the detailed ones you see in the lidar systems of self-driving cars. It really is more like a cloud than anything else — a small, upright cloud standing near the fridge in the office kitchen. When someone else comes in to grab a coffee, there’s another, separately tracked cloud. But there’s not enough detail to tell people apart, or, without careful scrutiny anyway, features like size or clothing.

Of course you could track the clouds back to their desks and retroactively identify them, but really there’s no shortage of ways to track people now. Why install a new one that’s more useful for other things?

Because the data from something like this is certainly valuable. Cafes can watch occupancy rates of seats and A-B test different layouts; gyms can see which machines are used the most and require maintenance or cleaning; offices can repurpose unpopular meeting rooms or furniture; retail stores can find cold racks. The software that comes with the devices can also tell how far people are from each other, how long they tend to stay at various spots, and whether certain thoroughfares are used more than others. 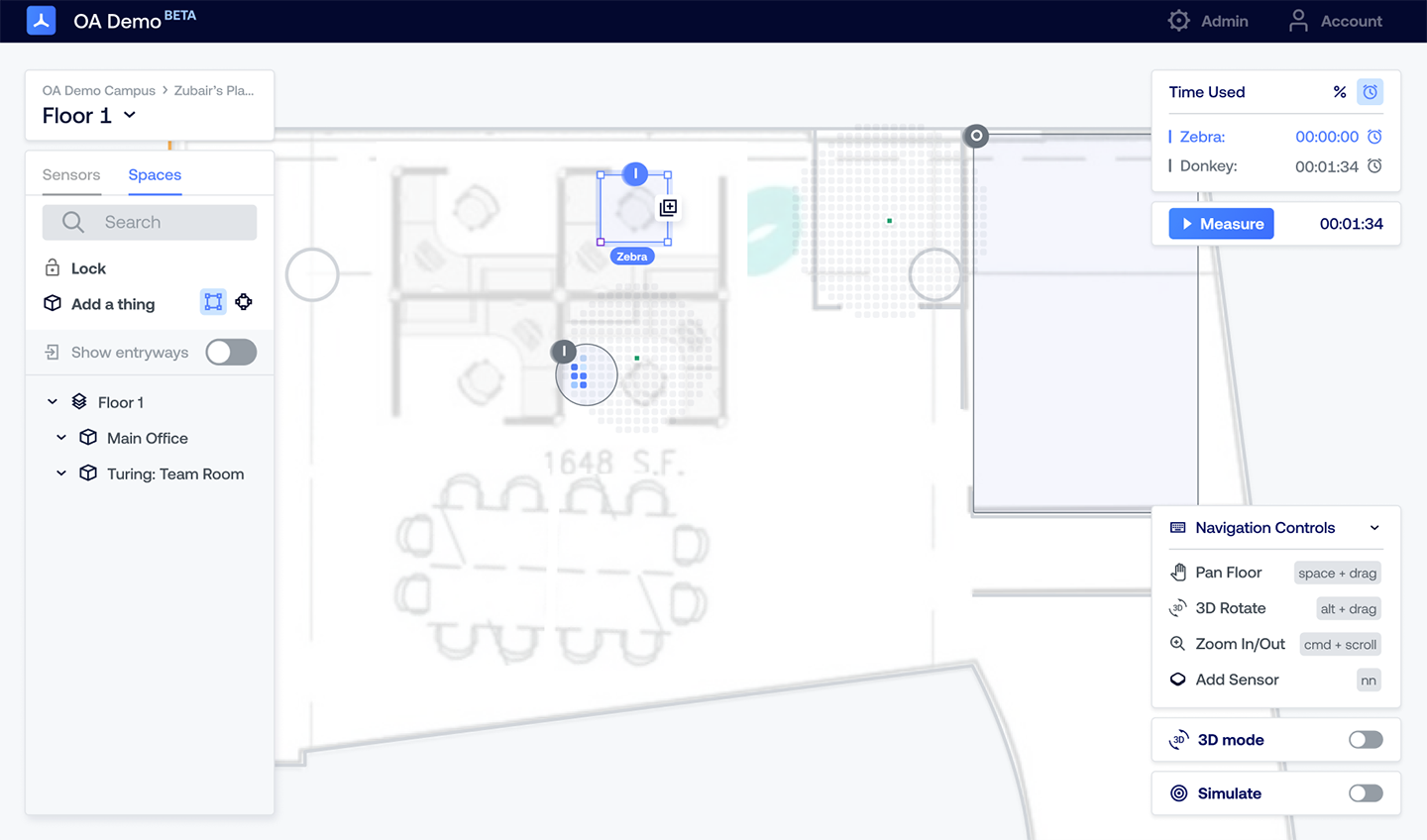 A screenshot of the Density software in action.

The data is aggregated in real time, so a shared office space can easily tell — without asking or double-checking — which desks are empty and have been all morning. Restaurants similarly wouldn’t have their table counts at the host station lag behind reality. (As you can imagine, these applications are primarily for non-pandemic times, but now may be the perfect chance to install the devices.)

Add a layout image to the real-time cloud and all of a sudden things get really real:

Each of the Open Area sensors, which are about the size of a BLT, can cover 1,325 square feet from up to 20 feet off the ground. That’s a circle about 38-40 feet in diameter, into which you can fit a couple meeting rooms or about 20 desks. That’s more than competitive with overhead optical cameras, plus the privacy benefit.

If you’re curious how they look in a real office area, here’s a little “seek and find” puzzle for you. They’re hidden in each of the following office photos. I’ve put them in this gallery in order of difficulty.

Be ready for a bit of sticker shock at first, though. An Open Area sensor costs $399 and there’s a $199 yearly license fee for each one you use. So kitting out a decent size office will probably get you well into the five-figure range. Of course, anyone who runs a space that large knows the costs of things like doing space usage studies (people actually sitting there, watching who uses what) and other useful gear like badge-based entry.

Thanks to COVID-19, everybody wants Density’s technology tracking building occupancy and use

Density already counts some major enterprises among its customers, and while the entire office and retail world is being turned upside-down right now, tools like this are likely to figure into whatever comes next. Being smart about how you use a space not only saves money, it’s safer and probably makes for happier people in it.