E-commerce has boomed this year, with more businesses and shoppers than ever before turning to websites and apps as a safer, socially distanced alternative during the current global health pandemic. Today, a startup that has built a platform to help individual companies and brands design better websites is announcing a round of growth funding to help them step up to that challenge with faster and better designed interfaces.

Shogun, which lets companies build sites that sit on top of e-commerce back-ends like Shopify, Big Commerce or Magento to let them sell goods and services, is today announcing that it has raised $35 million in funding after seeing its business grow 182% over the last year, with 15,000 companies — including Leesa, MVMT, Timbuk2, Chubbies and K Swiss, as well as household Fortune 500 brands that it declines to name — now using Shogun’s tools, up 5,000 in the last eight months.

Finbarr Taylor, the CEO who co-founded the company with Nick Raushenbush, said that the startup plans to use the funding to continue enhancing its two main products — Page Builder, a drag-and-drop page builder; and Frontend, an end-to-end “headless commerce” solution with faster page-load times and tools for enterprises to easily update pages — and to help improve its market strategy. 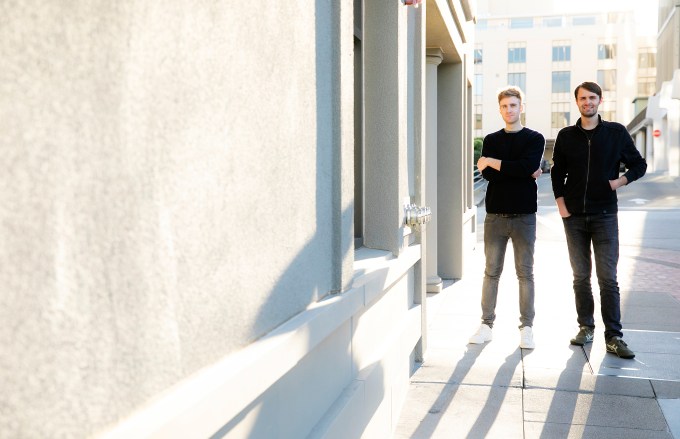 To date, much of the company’s growth has been organic, with a marketing team of two, and also only two sales people. “So it will be about scaling up those teams as well as our engineer and design and product teams, to deliver on the promises we made to our customers,” Taylor said.

The Series B is being led by Accel, with participation from Initialized Capital, VMG Partners and Y Combinator. The round also has a number of high-profile individuals in it, which speaks to Shogun’s credibility in the worlds of e-commerce and web design. The list includes Bryant Chou (CTO at Webflow), Mark Lavelle and Mark Lenhard (former CEO and SVP of Strategy at Magento, respectively), Alex O’Byrne (CEO of We Make Websites, a leading Shopify agency), Brian Grady (CEO of Gorilla Group, a leading Magento agency) and Romain Lapeyre (CEO of Gorgias).

Growth is one marker of how hot the market is for what Shogun is doing. In addition to Shogun’s own expanding list of users, it’s estimated by the company (citing figures from Adobe) that there has been some $94 billion in extra sales online (beyond original projections, that is) since March globally.

Another marker is the funding itself. This the second round that the startup has raised in the short span of eight months: Shogun closed a $10 million Series A in February of this year led by Initialized (with participation also from YC and VMG).

And a third marker is the valuation. Taylor said that the company is valued in the “solid nine figures” but declined to say where in the region of hundreds of millions of dollars that might be. For some context, the company was valued at $50 million in February, according to data from PitchBook.

Shogun’s news comes at a key moment in the world of e-commerce, not just in terms of the wider macroeconomic trends, but in terms of who is making the wheels move.

Amazon and other marketplaces have come to dominate how a lot of people are shopping online: after all, they offer one-stop shops for whatever you might want or need, free shipping and a familiar interface. Similarly, social media platforms have made a play as a new kind of “store” of sorts, a place where brands already are interacting with would-be customers, and are now being given the tools to sell to them there as well.

But that doesn’t tell the whole story: Brands and companies want to have their own space to present things how they want them to look, to better control the customer experience and to make sure that they are not beholden to a third party (both physically and financially) for their online survival.

Yes, some consumers might only care about where they can get what they want for the cheapest price, but others know exactly what they want, or feel loyal to a specific company, and want to shop there without the rest of the noise, and there will always be a business opportunity in building stores for them, too.

And the predictability of the interface of a marketplace like Amazon, or a “shoppable” photo on Instagram, belies how frustratingly oblique it can also be at times. I don’t want to see 15 different Danish whisks at slightly different prices; I just want one that will arrive in one piece and not break after a month of use, leading me down a rabbit hole trying to find someone to provide a refund. Similarly, I may want to buy from a brand, but perhaps not the particular item that they’re serving me in a Story or a Pin.

Shogun’s proposition to the companies it works with is to give them more choice and better speed after they have already made the decision to build their own “real estate” online using backends like Shopify’s.

The opportunity is that, even if an e-commerce business is seen as a “tech” play, that is not often its core competency.

“Merchants large and small are getting sick of maintaining their own tech stacks,” said Ethan Choi, a partner at Accel. While the platforms are getting ever more sophisticated by moving into areas like shipping and logistics alongside payments and inventory ordering and so on, they have yet to extend into web design.

“Shopify only has like 15 templates,” he said. “There is no design control and you look like 1 of one million other sites.” At the same time, if you have the funds and energy to build a custom site, he added, “that is expensive and it can take a whole day to change just a piece of text.”

The speed is an issue that Shogun has identified and fixed in another way: Taylor says that with site speed being the most important aspect of converting a browser to a buyer, it’s providing the fastest page loading times to customers.

As with so many startup stories, Taylor and Raushenbush stumbled on their gap in the market by accident.

Taylor had been working at Y Combinator — he is an engineer originally from Glasgow, Scotland, and his job was to help devise and build tools for YC to manage the huge inbound volume of applications it was receiving for its incubator. (Side note: One offshoot of that was the Startup School that the company created to better address working with startups on a more regional level: Taylor built that.)

As a side project, he and his friend Nick had come up with a page builder based on Ruby on Rails. It wasn’t getting much traction, but a friend of Nick’s, who worked for an e-commerce agency, said that if the two could tweak it for building e-commerce pages specifically, his agency would use it and even pay them.

That eventually took off with more customers and more use, prompting them to eventually move to the other side of the organization, founding a startup based on the idea and becoming part of a YC cohort.

Looking ahead, one particular focus for Shogun, Taylor said, will be to build more tools to improve mobile commerce. Typically, mobile accounts for 80% of all e-commerce browsing but only some 20% of sales, he noted.