Algorithms are reshaping many parts of our lives, including how news gets to us. Around the world, entrepreneurs make use of algorithms to program their ideal news apps, and while they normally agree on universal objectives like fighting fake news, their views diverge elsewhere, leading to different applications of machines and user experiences.

No one has a monopoly over the “right” approach to build an algorithmic news app, but it’s perhaps timely and necessary to examine various players in the field and ask how their black boxes affect people’s content consumption. We need look no further than China and the U.S., where machine-driven news platforms are in full bloom.

Show me more of what I want

Before ByteDance became synonymous with TikTok globally, it was known in China for its algorithm-powered news app Jinri Toutiao, or Today’s Headlines. The Chinese app has not disclosed its user numbers for years, but third-party data suggests it had 360 million monthly active users by January 2020, eight years after launching.

Zhang Yiming, the founder of ByteDance, built Toutiao with the goal to give users more of what they want.

“We pictured Toutiao’s feed to be a smart antenna linked to an infinite ocean of information. When you swipe, you retrieve what you’re most interested in right now and in this place,” said Zhang at the company’s seventh anniversary. His remark echoes the app’s catchy tagline: Only what you care are headlines.

To achieve its mission, the app predicts user preferences based on a few parameters, Toutiao’s scientist Cao Huanhuan revealed in a speech in 2018: profiles per the app’s understanding of user demographics; content’s timeliness and popularity; users’ locations; and what similar users like to consume. The app then measures the success of its recommendations by tracking clicks, time spent, likes, comments and shares.

Having world-class algorithms is just part of the story; the other challenge is to create Zhang’s “ocean of information.” Early on, Toutiao relied on crawling the internet to fill its reservoir; these days, the app runs a publishing platform with creators ranging from news outlets, bloggers, celebrities, through to influencers. To sustain the torrent of information available, the app doles out subsidies and devises monetization methods for creators, sharing ad revenue and allowing them to sell products. 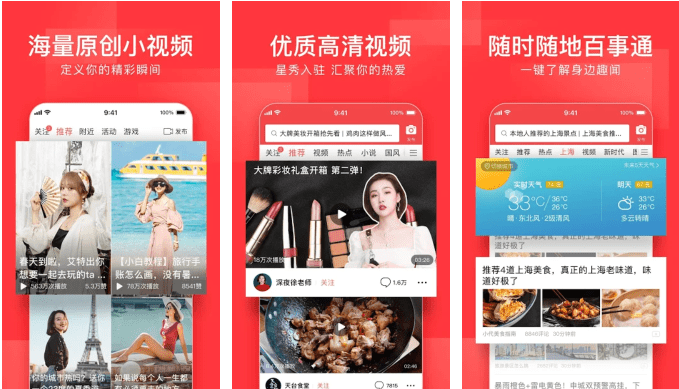