Disney+ is the latest streaming service to introduce a way for friends and family to watch movies and TV together while in different locations.

With the pandemic closing movie theaters and making any kind of indoor socializing pretty risky, the Netflix Party Chrome extension has become the main way I watch TV with friends. Netflix Party doesn’t have any official connection to Netflix, but other streaming services, like Amazon Prime Video and Disney-owned Hulu, have been adding similar features of their own.

Disney has already been testing the new GroupWatch feature in Canada, Australia and New Zealand, and today it’s launching for viewers in the United States.

Jerrell Jimerson, the chief product officer for Disney’s streaming services, told me that GroupWatch was already in development before the pandemic, but that the company “worked to accelerate it given the realities of COVID.”

The Disney+ experience has some key advantages over most other co-watching technology, because it doesn’t require users to install a browser extension and it will work on any device, not just laptop and desktop computers. Jimerson explained that the goal was to create something that was “super easy for consumers to use” and that “didn’t take away from the content and didn’t take away from the viewing experience.” 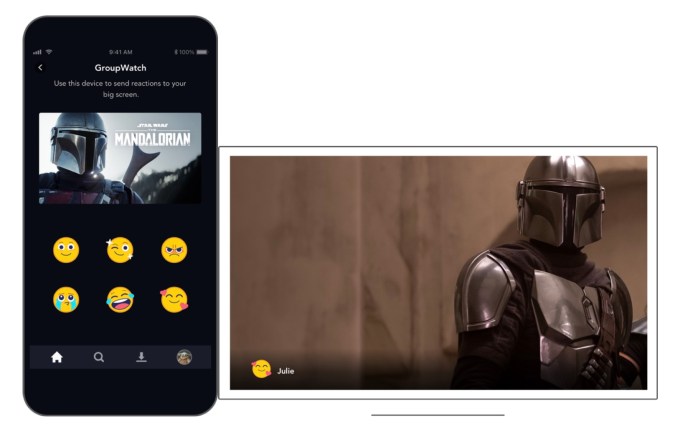 Once you’ve selected GroupWatch from the Details menu of a movie or TV show, you can invite up to six other people to participate — of course, they’ll need a Disney+ subscription of their own. And while the invitation has to be created via the Disney+ website or mobile app, people can also participate in a GroupWatch from their internet-connected TVs.

Besides synchronizing video playback (which any participant can control), GroupWatch allows viewers to respond to what’s happening on-screen by sharing emojis. But it lacks one of the hallmarks of co-watching, namely a chat that runs alongside the video.

Granted, a chat window could have been a bit distracting when blown up onto a big TV, but it’s arguably the centerpiece of social viewing. Jimerson said that if viewers want to chat, they can continue talking on whatever channel they used to send the invite (presumably a chat app on their phones).

“There are other opportunities to integrate communication capabilities, but we haven’t shared any timing on those things,” he added.