Zuleyka Strasner didn’t set out to become an advocate for zero-waste consumption.

The former manager of partner operations at Felicis Ventures had initially pursued a career in politics in the U.K. before a move to San Francisco with her husband. It was on their honeymoon on a small island in the Caribbean that Strasner says she first saw the ways in which plastic use destroyed the environment.

That experience turned the onetime political operative into a zero-waste crusader — a transformation that culminated in the creation of Zero Grocery, a subscription-based grocery delivery service that sells all of its goods in zero-waste packaging.

Strasner returned from Corn Island with a purpose to reduce her plastic use, and found inspiration in the social media posts and work of women like Anamarie Shreeves, the founder of Fort Negrita; Lauren Singer, who became known for her TedX Teen talk on living waste free and launched Package Free; and Bea Johnson, who became a social media celebrity for her work reducing consumption and living waste-free.

7 years and going strong. This photo, taken by @hellaerwin years ago, doesn't look too dissimilar from what my jar looks like now! I get a lot of questions about what I still put in my jar, and the biggest things are the pieces of plastic that connect a price tag to a piece of clothing, produce stickers, and festival/concert bracelets. 👍 What are the items that you have hard a hard time avoiding on your path to reduce your waste?

Following in the zero-waste footsteps of others eventually led Strasner from her home in Redwood City, California to San Francisco’s Rainbow Grocery, a food co-op dedicated to sustainable business practices. That 45-minute drive and an hour spent in a store juggling jars, bottles and shakers to perform basic shopping tasks convinced Strasner that there had to be a better way to shop zero-waste — especially for busy parents, professionals and singles.

So she built one.

“I may have had no team and no money, but I had data. I spent 6 months alpha testing the early version of Zero. I was working from my apartment (cue cliché) getting real sign-ups, servicing real customers and doing a lot of growth hacking,” Strasner wrote in a post on Medium about the company’s early fundraising efforts. “It was really janky, but going between research reports, market data and the data I was collecting from real-people, I had something tangible to put under investors noses to back up how Zero looks at scale.”

Living through COVID-19 is a literal trash heap

Strasner’s push to create alternatives to single-use plastic in grocery delivery comes as the use of single use plastics skyrockets and grocery delivery services surge — putting her new company in the enviable position of solving an obvious problem that’s becoming more apparent to everyone.

An August study from the investment bank Jefferies on single-use plastic identified the surge in plastic use and laid the blame at the feet of the pandemic.

“Bans and taxes have been rolled back, physical and chemical recycling activity has decreased, and virus concerns may have reduced consumers’ desire to minimize consumption of single-use plastics,” said the report, entitled “Drowning in Plastics,” which was quoted in Fortune.

While much of the use in home delivery and consumer goods has been offset by reductions in the use of plastics in manufacturing as industries slowed down production, the reopening of international economies means there’s the potential for renewed industrial use even as consumers renew their love affair with plastic.

Companies like Strasner’s present a way forward for consumers willing to pay a premium for the waste reduction — and she’s not alone.

Changing the supply chain for food and consumer packaged goods

Lauren Singer was already two years into operating her (profitable and cash-flow positive since “day one”) Brooklyn-based and e-commerce stores when she raised $4.5 million for her plastic free and zero-waste wares last September.

The image of the years’ worth of waste she claimed to be able to fit into a single jar had made her a viral sensation on Instagram and she’d managed to turn that post, and her celebrity, into a business. She wasn’t alone. Bea Johnson, another star of the zero-waste movement, wrote the book on going zero-waste and has turned that into a business of her own.

At Package Free, products range from a line of plastic-free and zero-waste lifestyle products like bamboo toothbrushes and mason jars, to natural tooth powder alongside natural pacifiers, and a dog shampoo bar. The company’s packaging is composed of 100% up-cycled post-consumer boxes with paper wrapping and paper tape, according to the company.

Meanwhile, another New York-based startup, Fresh Bowl, raised $2.1 million in January to bring zero-waste packaging and circular economic principles to the bowl business. The company, founded by Zach Lawless, Chloe Vichot and Paul Christophe, uses vending machines around New York that can hold roughly 220 prepared meals with a five-day shelf-life. Those meals are distributed in reusable containers that customers can return for a refund of a deposit.

Before the pandemic hit in the early months of the company’s financing, each of its machines were on track to bring in $75,000 in revenue — and roughly 85% of the company’s containers were being returned for re-use, according to a January interview with chief executive officer Zach Lawless.

Roughly 40% of landfilled material is food or food packaging, Lawless said. “For consumers it’s hard to make that trade-off between convenience and sustainability,” he said. Companies like Fresh Bowl and Strasner’s Zero Grocery are each trying to make that tradeoff a little easier.

Zero Grocery currently counts around 850 unique items in stock and expects to be over 1,000 items at the end of the year — and all delivered in reusable or compostable packaging, according to Strasner.

“Our aim is to not create anything that would go into the landfill and really limit what would need to be recycled. For the products that are single use… they are banded toilet rolls and they’re wrapped in a single sheet of paper. It’s all compostable,” said Strasner.

Zero Grocery’s current operations are confined to the Bay Area, but the company saw its growth triple when the pandemic hit in March and then grow 20X over the ensuing months, according to Strasner. And unlike companies like Singer’s and Lawless’, Strasner didn’t have the luxury of reaching out to a handful of investors for a small cap table.

“I have continuously raised throughout this period to get to this moment in time. Initially I believed that we would have a more typical round structure, maybe myself misunderstanding that I’m an atypical founder,” Strasner said. As a Black, trans woman, the path to “yes” from investors involved more than 250 pitches and an undue amount of “nos.”

An early champion was Charles Hudson, the founder of Precursor Ventures, who helped lead a seed round for the company back in 2019. Hudson’s investment allowed the company to launch its first service, an exclusive, à la carte, home delivery service. It was basically Strasner wheeling a cart brimming with produce, grains and compostable items into customers’ homes and filling their own jars. 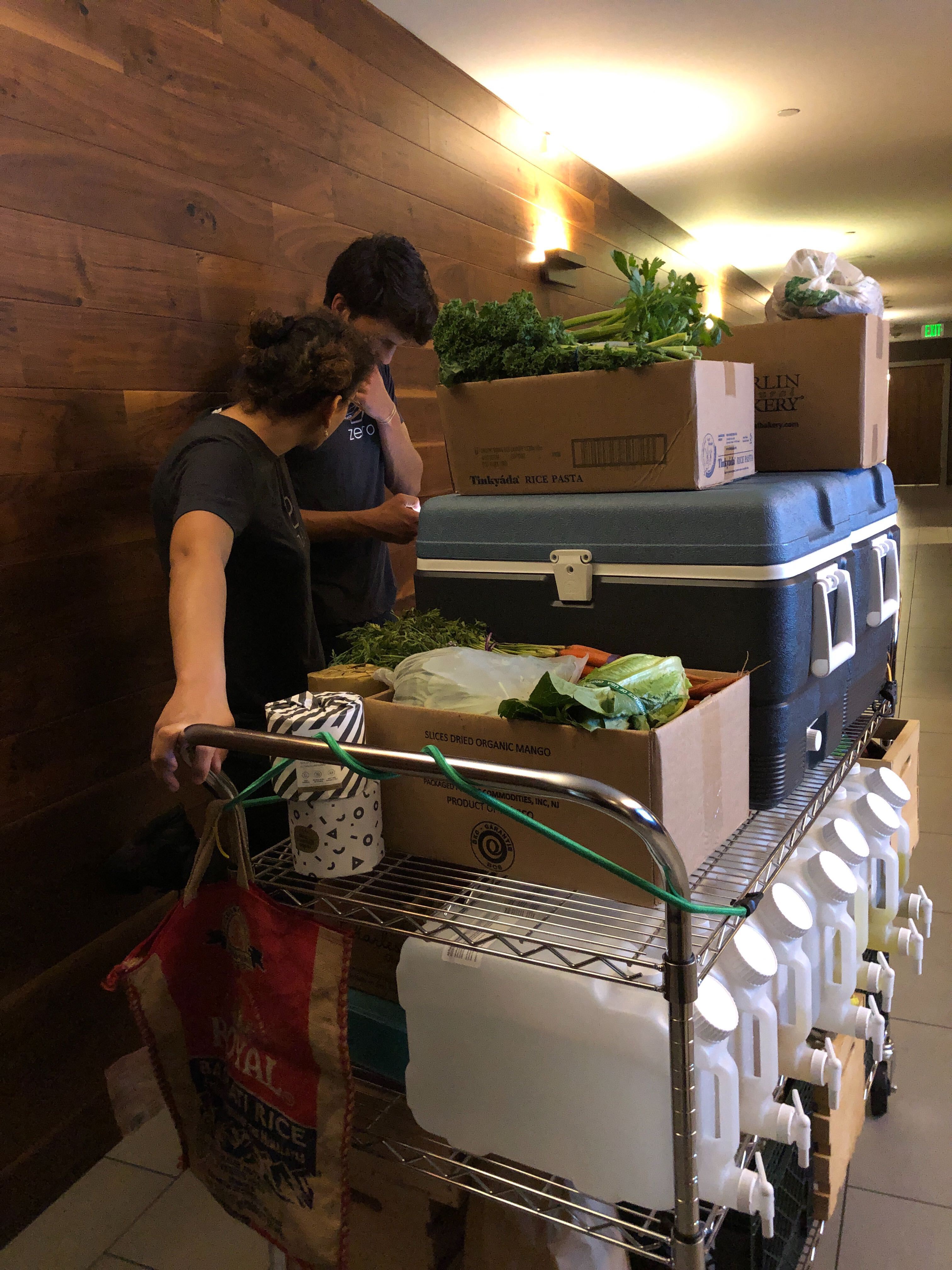 Ultimately untenable, the first service gave Strasner a view into the ways in which grocery delivery worked, and allowed her to create the second version of the service.

That was more like a latter-day milkman service, where the company would deliver next-day, door-to-door delivery of more than 100 zero-waste products. These were pre-packaged goods that the company just dropped off and then had customers return (a similar thesis to Fresh Bowl’s retail strategy).

That was around November 2019, when the company launched publicly across the Bay Area with a new offering. The initial traction allowed Strasner to raise another $500,000 from existing investors, as well as new firms like Chingona Ventures and Cleo Capital.

“At that point we had 60 members on the platform and had done four figures of revenue of that month,” Strasner said.

Then COVID-19 hit the Bay Area and sales started soaring. To meet the needs of a strained supply chain — since the company doesn’t use any third-party services for delivery and involves a heavy bit of sanitization of containers so they can be re-used — Zero Grocery raised another $700,00 from Incite.org, Gaingels, Arlan Hamilton and MaC Ventures.

When COVID-19 hit the US, our team was among the first companies to go into lockdown. By late February, only essential personnel were on the warehouse floor for order preparation and delivery in head-to-toe PPE. Soon after that, the Bay Area went into full shelter-in-place.

Much like other companies in the grocery delivery space, our demand skyrocketed. To keep up, we grew our team in half the time we anticipated and launched features that were half-baked. Customer experience is tantamount, and our underdog team fought tooth-and-nail to preserve that despite long hours, little sleep, and no time for planning. We abandoned our notions of roles and split up the responsibilities of customer service, order packing, feature development, and more.

Strasner’s experiences as an immigrant, Black, trans founder mean that she thinks about sustainability not just in environmental terms, but also social sustainability. That’s why she works with the staffing service R3 Score to provide opportunities for people who had criminal records. The service provides a risk analysis for employers of job applicants who have a criminal record, to give employers a better sense of their viability as an employee.

As she told Fast Company, “This is a highly capable, untapped labor force who is ready to work and is actively looking for opportunities… This is not merely a COVID stopgap measure for us; it’s something we’re incorporating into our business for the long-term.”

Zero Grocery now counts many thousands of customers on its service and has just raised another $3 million, led by the investment firm 1984, to grow the business. The company charges $25 for a membership that includes free deliveries and collects empty containers. Non-members pay a $7.99 delivery fee for groceries priced competitively with Whole Foods and other higher-end grocery options.

Right now, Zero Grocery operates as the only fully zero-waste online grocery store in the U.S., and its numbers are growing quickly.

But that kind of success can breed competition, and there are certainly no shortage of would-be competitors waiting in the wings.

Already some of the largest consumer packaged goods companies in the U.S. have rolled out a version of zero-waste delivery services for their products. These are companies like Procter & Gamble and Froneri, the owner of ice cream brand Häagen-Dazs (and others). In April, their reusable, no-waste delivery service Loop launched nationwide to provide customers across the country with recyclable and reusable packaged containers.

The commercialization of new kinds of packaging technologies from companies like NotPla, Varden and Vericool mean that compostable material packaging could become a wider solution to the waste dilemma.

Still, these solutions to packaging waste come with their own issues, like the sustainability of the supply chain used to make them and the carbon footprint of the manufacturing processes. In instances like these, reducing the need to manufacture new material is likely the most sustainable option.

And, in many cases, companies like Zero Grocery help their vendors do a lot of the work to reduce the footprint of their own supply chains.

“A lot of work is to enable them to exist within a plastic-free supply chain using our technology,” said Strasner, of the work she’d done with vendors.

“I started Zero to make zero-waste grocery shopping effortless and empower people to protect the planet while shopping conveniently,” she said. That’s a notion everyone can treasure.