Chip designer Arm today announced the launch of a new set of solutions for autonomous systems for both automotive and industrial use cases. These include the Arm Cortex-A78AE high-performance CPU,
the Mali-G78AE GPU and Arm Mali-C71AE image signal processor.

What makes all three of these chips stand out is that they have built-in safety features. “Safety,” in this context, means that the chips feature additional capabilities that ensure that every calculation is essentially double-checked.

Traditionally, Arm has offered two modes for its CPU. In “split mode,” all cores work independently and only go offline every now and then for quick sanity checks. This works well for applications with low or no safety requirements as the cores can run at close to their maximum performance. 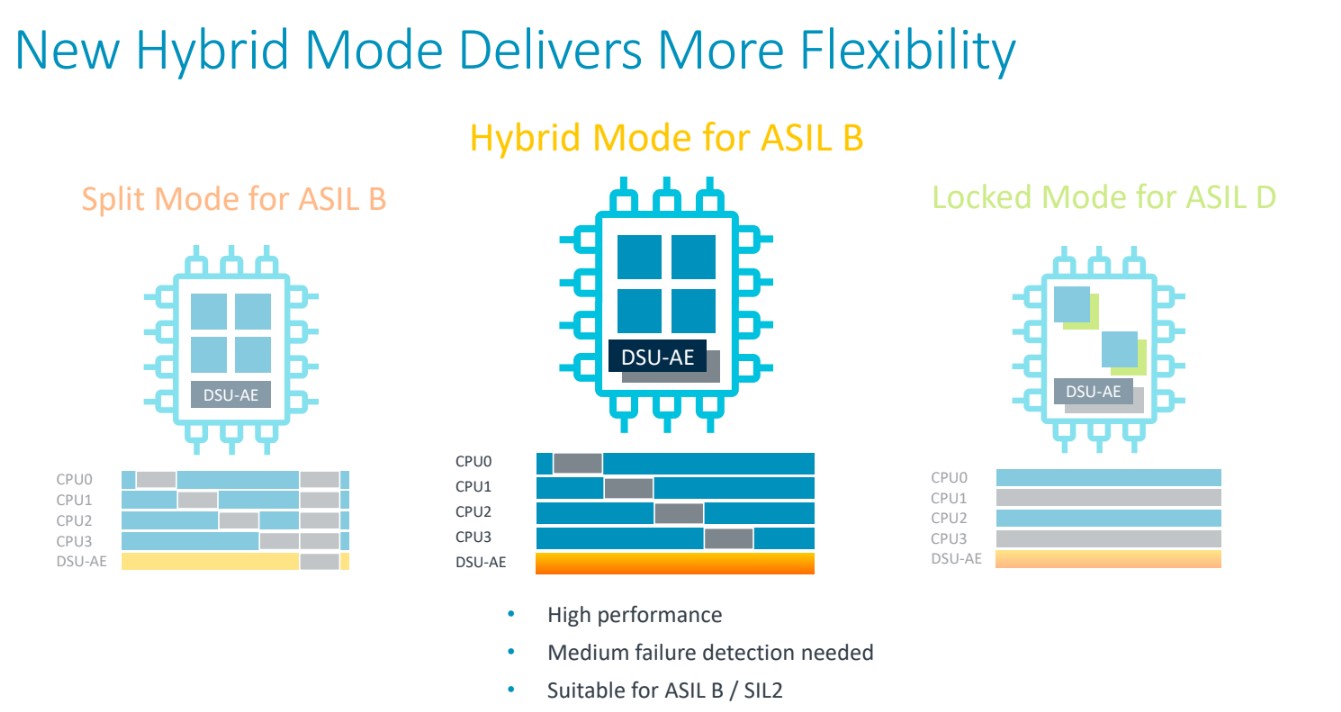 In “locked mode,” cores run in pairs and their operations are cross-checked against each other. This helps these chips satisfy various automotive safety requirements, but comes with an obvious performance penalty, as you can only use half the cores.

Today, the company introduced its new hybrid mode for its CPUs, which combines the best of both worlds for high-performance use cases where only medium failure detection is needed. It allows the cores to still run in split mode, but the shared cluster logic, which integrates the cores, now runs in lock mode. That provides the safety mechanisms of lock mode — just at a different layer — with the performance of split mode.

For the new AE-version of the Mali GPU, Arm is introducing what it calls “flexible partitioning,” which makes it easier to split the various GPU cores between workloads as needed. That means features like maps can run in one partition, separate from safety features like driver monitoring or running the instrument cluster.

Traditionally, Arm targeted these A0E-branded designs at the automotive industry. “AE” actually used to stand for “automotive enhanced.” Now, however, it is targeting the broader market for autonomous systems.

“We introduced this AE [intellectual property]. It was referring to ‘automotive enhanced,’ originally, and so it has specific features, performance, safety, for the automotive market,” Arm’s VP of its automotive business, Chet Babla, told me. “But fast-forward to today and what we’ve realized that in talking to industrial OEMs and the compute requirements, the safety requirements they have, they’ve said, ‘actually, what you’re doing in the automotive space is very applicable to the compute and safety challenges that we face.’ ”

While Arm is remaining relatively quiet about its $40 billion acquisition by Nvidia, which is still going the regulatory process, it’s worth noting that both companies have set their eyes on this market for autonomous systems, with Nvidia offering its own platform for autonomous robots, using its Jetson AGX, for example, which use ARM CPUs in addition to Nvidia’s own GPUs. It looks like that won’t change anytime soon.