Around a quarter of U.S. adults, or roughly 26%, say they get news by watching YouTube videos, according to a new study from Pew Research Center, which examined the Google-owned video platform’s growing influence over news distribution in the U.S., as well as its consumption. The study, not surprisingly, found that established news organizations no longer have full control over the news Americans watch, as only one-in-five YouTube consumers (23%) said they “often” get their news from channels affiliated with established news organizations. The exact same percentage said they “often” get their news from independent channels instead.

Independent channels in this study were defined as those that do not have a clear external affiliation. A news organization channel, meanwhile, would be a channel associated with an external news organization — like CNN or Fox News, for instance. 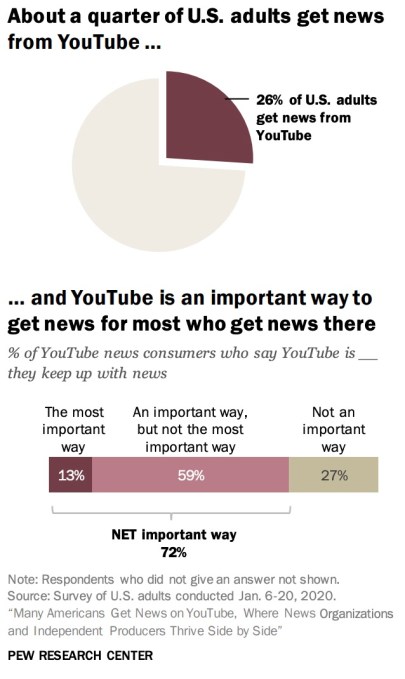 This study found that a majority, or 72%, of Americans said YouTube was either an important (59%) or the most important (13%) way they get their news. Most also said they didn’t see any big issues with getting their news from the site, but they did express some moderate concern about misinformation, political bias, YouTube’s demonetization practices and censorship.

A second part of the research involved content analysis of the 377 most popular YouTube news channels in November 2019 and the content of YouTube videos published by the 100 channels with the highest median of views in December 2019. This was performed by a combination of humans and computational methods, says Pew.

The analysis discovered that more than four-in-ten (44%) popular YouTube channels can be characterized as “personality-driven,” meaning the channel is oriented around an individual. This could be a journalist employed by an established news organization or it could be an independent host. 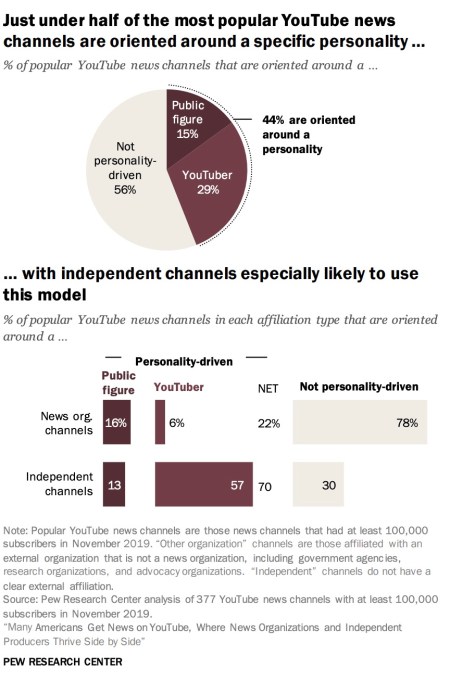 The study also looked into other aspects of the YouTube news environment and the topics being presented.

According to YouTube news consumers themselves, a clear majority (66%) said watching YouTube news videos helped them to better understand current events; 73% said they believe the videos to be largely accurate, and they tend to watch them closely (68% do) instead of playing them in the background.

Around half (48%) said they’re looking for “straight reporting” on YouTube — meaning, information and facts only. Meanwhile, 51% said they are primarily looking for opinions and commentary.

In response to an open-ended question about why YouTube was a unique place to get the news, the most common responses involved those related to the content of the videos — for instance, that they included news outside the mainstream or that they featured many different opinions and views. 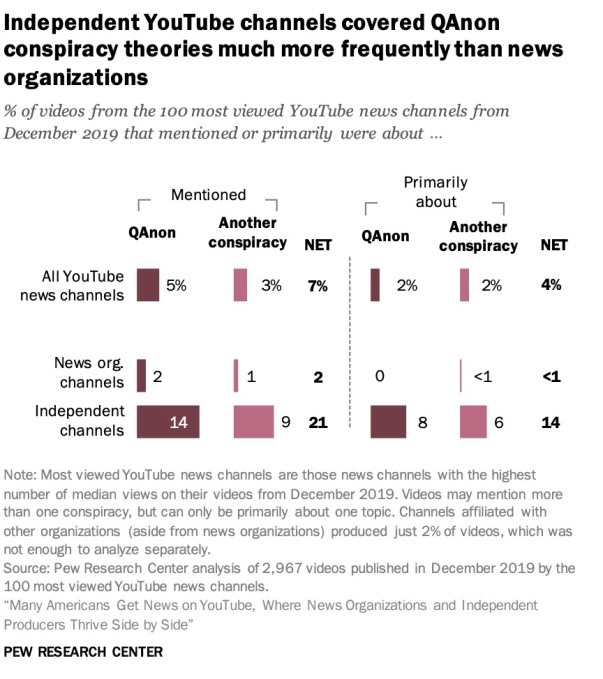 An analysis of nearly 3,000 videos by the 100 most viewed YouTube channels in December 2019 found that 21% of videos by independent channels mentioned a conspiracy theory, compared with just 2% of those from established news organizations. QAnon was the most commonly referenced conspiracy theory, as 14% of videos from independent channels had discussed it, compared with 2% of established news organizations.

Independent channels were also about twice as likely as established news organizations to present the news with a negative tone.

Overall, the videos from the top 100 most viewed YouTube news channels assessed in December 2019, were neither too negative or positive (69%). But broken down by type, 37% of videos on the independent channels were negative, compared with 17% for established news organizations. Negative videos were more popular, too. Across all channels, negative videos averaged 184,000 views compared with 172,000 for neutral or mixed tone videos and 117,000 views for positive videos. 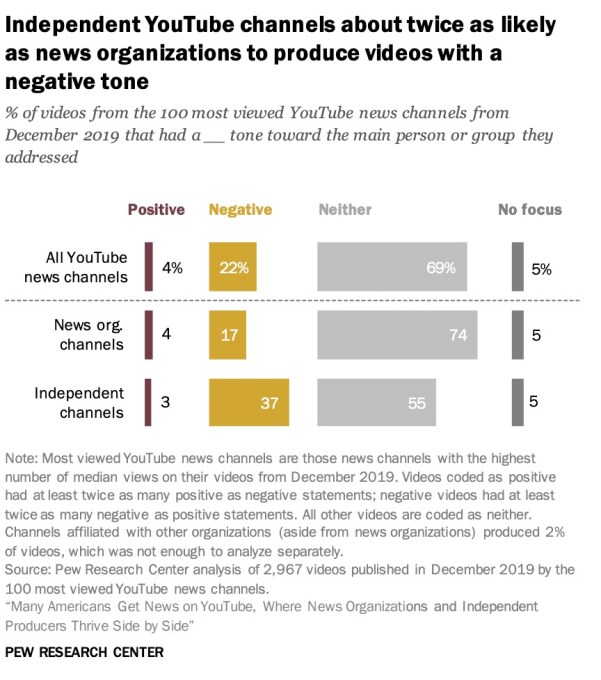 Meanwhile, videos about the Trump administration made up the largest share of views in December 2019, as roughly a third (36%) were about the impeachment and 31% were about other domestic issues, like gun control, abortion or immigration. Another 9% were about international affairs. Videos about the Trump administration saw around 250,000 average views compared with videos on other topics, which averaged 122,000 views. Trump was the most common video focus in about a quarter of the videos studied, or 24%.

Videos about the 2020 elections, which at the time were centered around the Democratic primary, were the topic of just 12% of news videos, by comparison. 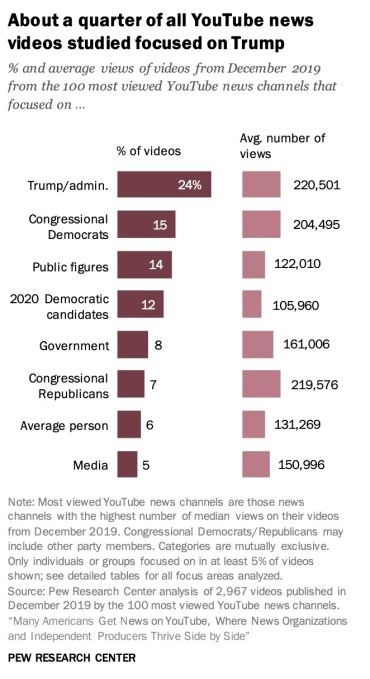 The study also examined how YouTube news channels presented themselves. It found that the vast majority don’t clearly state a political ideology even when the content of their videos makes it clear they have an ideological slant.

Only around 12% of YouTube news channels presented their political ideology in their description. Of those, 8% were right-leaning and 4% were left-leaning. Independent news channels were more likely to present themselves using partisan terms and more likely to say they leaned right.

The full study is available via the Pew Research Center website.