Amazon today announced a redesign Fire TV experience along with an updated Fire TV Stick and a new, lower-cost Fire TV Stick Lite. The updated interface for the Alexa-enabled smart TV platform will introduce a handful of new features, including support video calling and other options for using Fire TV as a way to video chat, including later, support for Zoom, Amazon says.

It also improves the overall design of the Fire TV software experience.

The updated Fire TV design includes a personalized home page where you can more quickly get to your favorite content and apps. It will also support the recently introduced user profiles for up to six people in a household. The profiles allow users to keep track of the shows they’re watching and see recommendations tailored to their own interests.

Fire TV’s navigation has also been simplified. Gone is the lengthy row of tabs at the top of the screen to click through. Instead, navigation has moved down the page next to your profile icon, and now includes tabs for Home, Find, Live, and Library, alongside a row of your favorite apps.

The top of the screen, meanwhile, has been freed up to better display a large advertisement for Amazon’s own content or those from other properties. This is an understandable design choice as it gives Amazon the ability to promote its own shows, but it also takes up a large part of the screen for what may feel like an ad to some customers.

An Alexa hub on Fire TV will help to show off what sort of things you can do with Alexa, including how you can use picture-in-picture mode to watch your smart cameras alongside your TV show. And now, when you ask Alexa a question, she won’t take over the full screen — a tweak that recalls Apple’s recent update to the Siri experience in iOS 14, perhaps.

But the bigger is news is around how Amazon envisions the Fire TV as a communications device.

“People have been watching more and more TV at home through devices like Fire TV and we’ve sold over 100 million of them live today,” said Amazon VP, Entertainment Devices and Services, Marc Whitten. “They’re watching billions of hours of entertainment a month. And they’ve also been using them for new things — different things that they hadn’t before,” he added.

On this front, Amazon is introducing Video Calling with Fire TV.  The new feature will allow the home’s biggest screen to display video calls. Initially, this will work by allowing customers to connect a Logitech USB webcam with their Fire TV Cube to enable two-way video calling on Alexa. Later, Amazon will add support for Zoom, but didn’t offer a launch date.

Though not mentioned today, it seems obvious that Amazon is likely planning to introduce new Fire TV television sets that include built-in webcams at some point further down the road. It’s unclear why it wasn’t ready to launch those today at its big event, however. 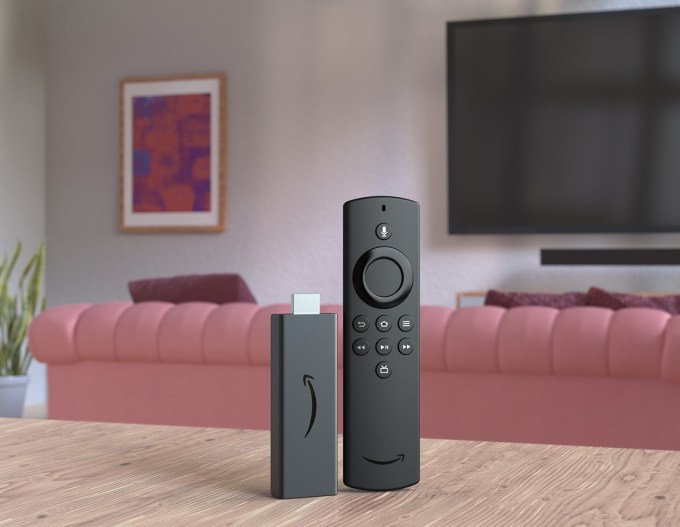 As for Fire TV hardware, today’s announcements were limited to Fire TV Stick.

The Fire TV Stick is one of Amazon’s best-sellers and the first product on all of Amazon.com to surpass a quarter of million in customer ratings, the company noted. It now has the most 5-star ratings of any product.

The updated Fire TV Stick has been updated with a 50% more powerful processor, and supports HDR compatibility and Dolby Atmos support for full-HD streaming. But it will use 50% less power than its predecessor, Amazon says. It will continue to ship with the Alexa remote, which includes dedicated volume, power and mute buttons that can control your TV, soundbar and AV equipment. The device will roll out later in the year for $39.99.

The Fire TV Stick Lite will start shipping later this month for $29.99.