Facebook garnered the ire of some virtual reality developers last year when they announced that they would be more aggressively curating the content that was for sale in the Oculus Store on their then-upcoming Quest headset. Developers who had been used to a more self-serve experience on the PC storefront were unexpectedly put in the position of being told their VR app wasn’t good enough.

SideQuest co-founder Shane Harris was one of those developers, but after his app was rejected, he moved to craft a workaround. He and his wife Orla started building a software platform that could sidestep the bureaucracy and easily side-load apps onto the Quest device even if the title wasn’t available in Facebook’s store. Users didn’t need to jailbreak their device to access SideQuest, they simply need to switch their headset into a “developer mode,” a straightforward process that Oculus has not taken meaningful steps to complicate over the years. The platform quickly took off, giving developers a place to test their own creations and users a place to demo titles that were a bit experimental or a bit more unfinished than Facebook’s more hand-polished app store.

Some of the platform’s hits include work-in-progress Quest ports of existing PC VR titles, wholly new creations and add-ons to Oculus Store titles like the popular Virtual Desktop app. Co-founder Orla Harris says that 800 new apps have been released on the store in the past six months.

As the app began reaching major usage milestones, attracting hundreds of thousands of monthly visitors to its site, the husband-and-wife co-founding team began to seek out some cash to expand their team. The Belfast-based duo ended up opting to join the BoostVC accelerator for its latest class, albeit remotely, raising $500,000 per its standard terms. They also went on to receive checks from The Fund and, notably, Oculus founder Palmer Luckey. The team raised $650,000 in total and has used that funding to bring on engineers, a community manager and a designer. 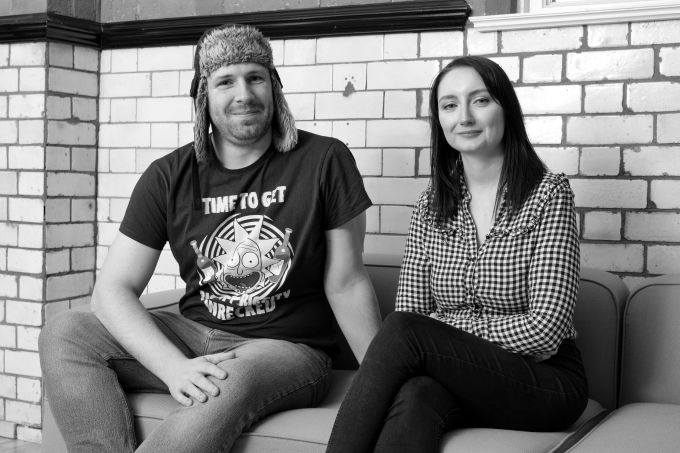 Luckey, who has backed a handful of VR startups as an angel investor since departing Facebook, said that SideQuest’s software followed in the footsteps of early developer products that his team had been building out before the Facebook acquisition and was promoting a more open Oculus platform. “No HMD manufacturer should have a stranglehold on the VR ecosystem or unilateral control over what people run on their VR headsets, and when I look at Sidequest, I see the spirit of Oculus Share,” Luckey said in a statement.

SideQuest has tried their best to stay in the good graces of Facebook and Oculus.

That has meant abiding by the company’s developer terms, which have admittedly complicated their monetization path. Most app stores make money by charging a percentage of revenues from sales of paid apps, but doing this would likely garner the ire of Facebook, the co-founders say, leaving the SideQuest team to mainly rely on paid promotion inside the store as a path toward revenues. They note that this path has forced them to get creative about what services they plan to offer down the road, but that it also has made the storefront more attractive to developers who are earning a full cut of app download revenues.

Growing ad revenue has left the company to make some decisions that have been controversial with its users, including the removal of adult-themed apps from the store earlier this year. The team tests all content that is submitted to the store, rejecting apps that are deemed NSFW or violate copyright. The SideQuest team curates which apps are listed in the user-facing storefront, but the app can also be used as a means for side-loading APK files onto the device that aren’t downloaded from the store.

Orla and Shane Harris say that they have worked to maintain a friendly relationship with the Facebook team, but acknowledge that they have an awful lot riding on that good rapport, noting that any move by Facebook to block SideQuest from working on the Quest would likely mean game over.

As companies like Apple attract regulatory attention due to their monolithic app storefronts, having a hobbyist marketplace operating in the background could offer some unforeseen long-term benefits for Facebook as they build out their VR efforts. The startup’s founders see their product as a positive development for all parties involved, noting that SideQuest offers budding VR developers a path to improving their demos and getting user feedback in a process that doesn’t exist elsewhere pre-release. During our conversation, Shane Harris proudly noted that a popular puzzle app in the SideQuest store called Cubism had recently “graduated” to the official Oculus Store, though he was quick to note that the developer had also just released another experimental mode of the game just for SideQuest.