The pandemic has caused K-12 classrooms, chaotic at the best of times, to descend into Zoom call chaos. What’s more, thousands of teachers who must wrangle this new, weird system are doing so with just a single monitor, making it difficult to see their students and the lesson at the same time. Two Screens for Teachers hopes to help out educators with this elementary, but hugely important, home office upgrade.

It’s a charity, so right up front we might as well say if you like the idea, you can donate here — the average cost is about $150 and gets the teacher everything they need.

Despite being put together by WalkScore co-founder Matt Lerner, this isn’t a large operation, just a few people who noticed this need and decided to do something about it. In retrospect it seems obvious, but the truth is teachers are used to getting by with less than enough and probably had more important things to worry about (like almost everything else).

Few people have the luxury of putting together a real “home office” on such short notice, and teachers, like everyone else, have been making do. A couple teachers sent in their setups:

Having used two monitors for a decade now, and large ones at that, I can’t imagine going back — and I’m just a writer. Imagine having 30 kids on a video call for hours at a time while also trying to get through presentations, homework assignments, emails and all the rest. On a laptop or a single monitor? Forget about it. Yet many teachers didn’t even know it was an option. 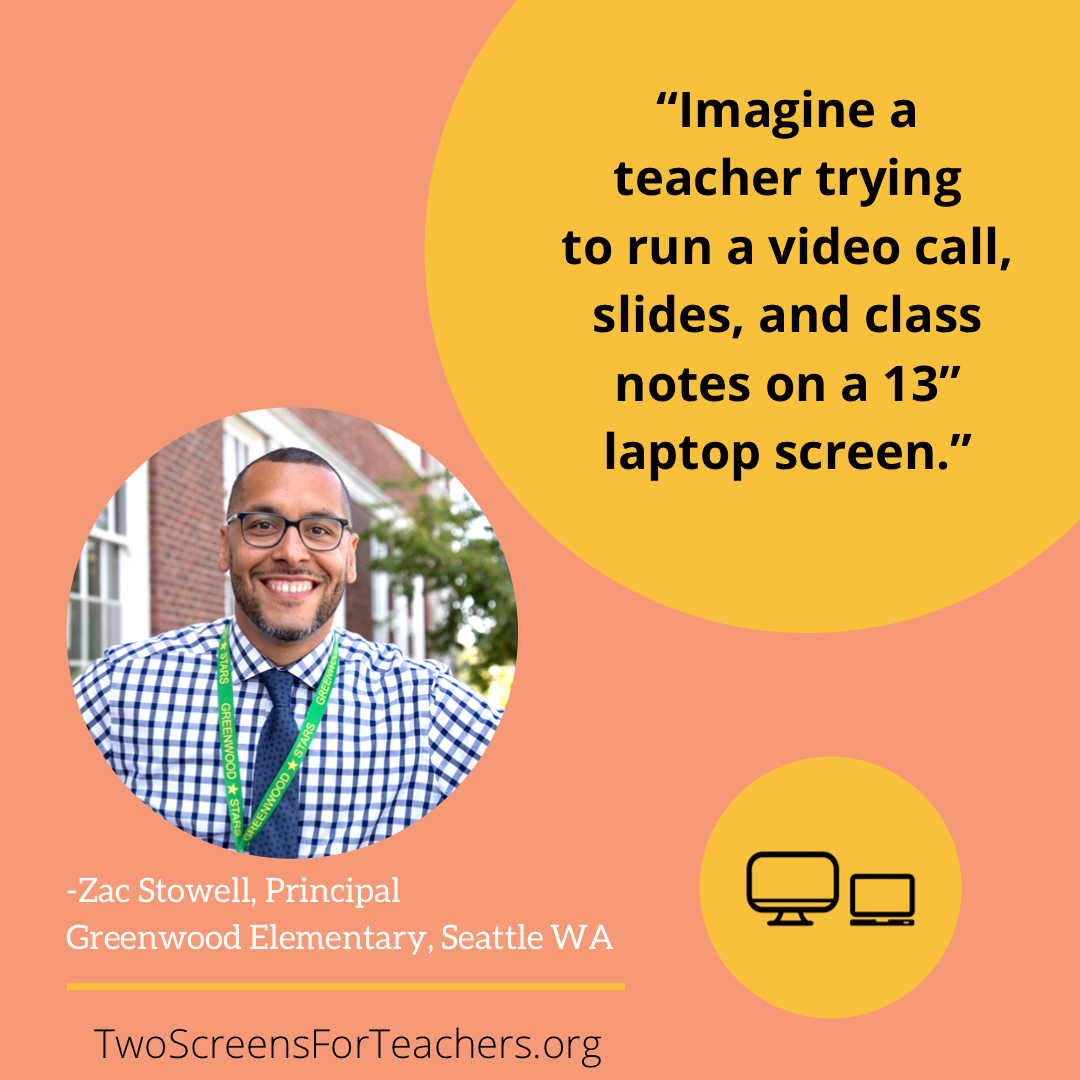 “Most teachers I spoke with had never considered getting a second monitor but they immediately understood the value of putting their students on one screen and lesson plans on the other,” he said. “When they get a new monitor the gratitude is intense.”

So far over 9,000 teachers have requested monitors through the site, Lerner told me, and over a thousand have been sent. It’s not just saying “me!” but filling out a form so it’s known what type of monitor and cable will be needed for maximum compatibility. That way donors can be told exactly what to order (on Amazon) and where to send it. Small operation, remember? No warehouses here, just people helping people.

That said, the crew isn’t flying completely by the seats of their pants. Two Screens For Teachers is partnering with DonorsChoose to make sure donations are tax-deductible, and they’re chatting with monitor providers like Dell to get bulk deals. Their ambitious goal is to distribute a quarter of a million monitors to teachers before the end of the year — and obviously they can only do that with 30 million bucks or so.

Hopefully they meet and exceed their goal. You can help by buying a monitor for a teacher, of course, but if you work for a company that has lots of spares or maybe a bit of budget set aside for social good, you might reach out to see if a larger gift can be arranged.

And of course, if you’re a teacher, feel free to sign up. Any full-time teacher in the U.S. is eligible.