Live TV streaming service Sling TV is joining in on the co-watching trend. The company today announced the launch of its own version of a co-viewing feature, which allows friends and family in different locations to watch live TV together at the same time. What makes Sling TV’s implementation unique, however, is that it’s allowing for both text and video chat alongside live TV, which is a first for the live TV industry, it says.

The feature, called Sling Watch Party, is initially available to existing Sling TV customers. But during the beta preview period, the company says guests will also be able to join a Watch Party by creating a free Sling TV account. However, this free access will only be available through month-end (Sept. 30).

To get started with a Watch Party, users should look for the new Watch Party icon on supported content.

Currently, Watch Party requires the Google Chrome web browser on a desktop or laptop computer in order to work. After clicking to start the Watch Party, users will sign into their Sling TV account if they hadn’t already, then send out an invite link that allows friends and family to join the Watch Party session. Sling TV will provide a built-in tool to quickly email the link or you can copy the link and distribute in other ways — like a preferred messaging app, for example. 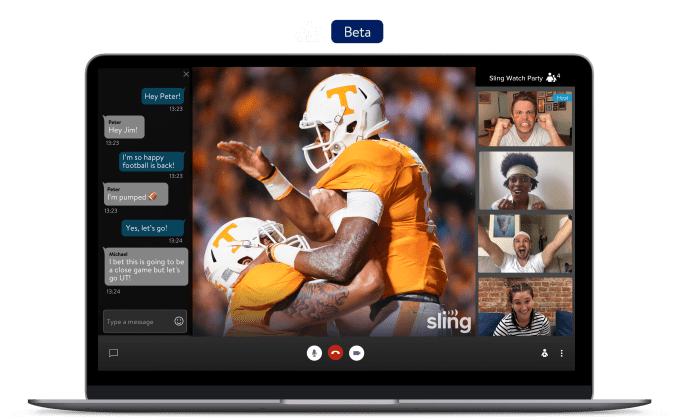 At launch, Watch Party-enabled content can be viewed by 4 total participants at the same time. It’s also not available across all of Sling TV’s online library or live programming. Instead, the company says that it works on “most” live, On Demand and Lookback content, but not local channels like NBC and FOX, rentals, Pay-per-view events, Premium or standalone channels, or programming saved on the Cloud DVR. Standard regional blackouts will also apply.

The feature is supported across Sling TV plans, including its domestic base service (Sling Orange and/or Sling Blue), Sling Latino, Sling International or any Sling TV Extra, depending on subscription.

That means users can co-watch content from channels like TNT, TBS, AMC, CNN, A&E, History, IFC, BBC America, TruTV, and others. Sling TV suggests the feature would be great for co-watching the NBA Western Conference Finals Game 4 or Star Wars: The Empire Strikes Back on TNT, The Walking Dead on AMC, American Pickers on History, or the first presidential debate on CNN, for example.

During the Watch Party session, the content will live stream in the middle of the screen while text chat sits off to one side of the screen (where it can be optionally hidden) and video chat is on the other. Sling TV recommends all users wear headphones for the best experience. Individuals will also be able to control what volume at which they hear each guest separately from the show itself by hovering over a friend’s video and adjusting their audio bar.

Customers can only host one Watch Party at a time, but there’s no limitation on how often the feature can be used otherwise.

Several streaming services and video chat applications have rolled out co-viewing experiences in the wake of the coronavirus pandemic, which has limited real-world gatherings. In addition to Hulu and Amazon Video, users are co-watching Netflix with an unofficial extension, Netflix Party, and co-watching on Plex. HBO is working with Scener to support virtual theater experiences and Facebook just launched co-watching within Messenger, too.

For Sling TV, the feature’s launch may also be tied to hopes of stemming subscriber losses. The company in February posted its first-ever subscriber decline as streaming competition heated up. It then shed 56,000 more subscribers in Q2 as the pandemic took its toll. With the support for temporary guest access, Sling TV may be hoping to convert some new subscribers, as well. But the feature is being offered for such a brief period that users may not have time to make co-viewing the sort habit they later decide to pay for, and instead use it for a one-off co-viewing session of sorts.