Facebook today is introducing a new tool that will allow rights holders to protect and manage their photos across both Facebook and Instagram. With the newly launched “Rights Manager for Images,” Facebook is offering creators and publishers access to content-matching technology similar to what it introduced in 2016 to combat stolen videos. The new feature, which is available in Facebook’s Creator Studio, will allow rights owners to assert control over their intellectual property across Facebook and Instagram, including when the image is embedded on an external website.

As with Facebook’s existing Rights Manager for video content, creators who want to assert their control over their images will have to provide Facebook with a copy of the images they want to protect, as well as a CSV file with image metadata, as a first step. These are uploaded to a reference library that Rights Manager uses to locate matches across both Facebook and Instagram.

When matching content is found on a Page or a profile, the rights holder can choose whether to simply monitor the content, block its use through a takedown request or attribute credit to themselves via an ownership link. Creators can also choose whether or not they want their ownership to apply worldwide or only in certain geographic locations. 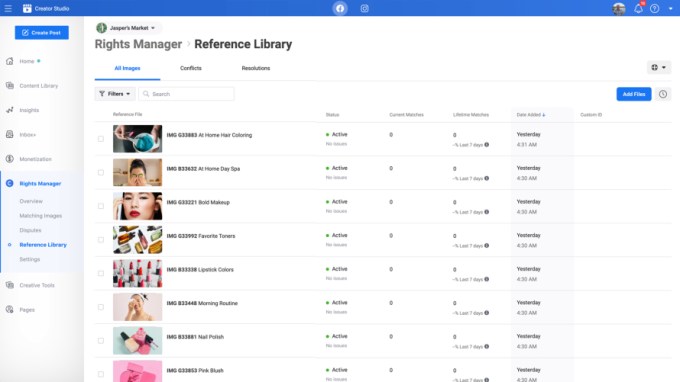 The new feature is designed more for those who maintain a large catalog of images or who post new content on a regular basis. For individuals who only occasionally encounter issues around misuse of their images, Facebook offers an IP reporting form instead, which even allows users to report more than one piece of matching content at a time.

The topic of who has the rights to use a photo that’s been posted on Facebook, and in particular, the image-heavy site Instagram, has become more controversial in recent months.

Many had long believed that embedding an Instagram post on their own website was a perfectly legal use case. But when Newsweek asked to feature a photographer’s image and they declined, the publication ran it as an embed, which then opened them up to a copyright lawsuit, filed this summer.

Newsweek had assumed the embed was legally permissible, given that Mashable recently won a similar copyright case in the recent past. But following the Newsweek case, Instagram clarified that its embedding feature didn’t include a license — if someone wanted to use the photo, they would need to ensure they had the proper license to do so. That bit of information came as something of a surprise and the case with Mashable was reopened as a result.

Until now, photographers had limited means of protecting their content across Facebook’s platforms. They could only take actions like enabling or disabling embedding entirely or making their account private, for example, to ensure their content wasn’t used and distributed without their permission. Of course, neither solution was ideal for a photographer trying to gain exposure and grow their career.

The Rights Manager for Images will now allow them a third option, as it’s capable of finding and matching images that have been used as embeds. At that point, the creator could choose to monitor, block or allow the image as they choose, a Facebook spokesperson told TechCrunch.

Facebook says access to the new Rights Manager for Images will be opened up initially to those who apply here.