For a company vaunted for its clandestine government work and strong engineering culture, you can’t help but wonder if the government’s bureaucratic norms and paperwork pushing are starting to flood into the Shire.

When most companies go public, they file a Form S-1 with the SEC, wait a few weeks through the investor road show, then submit an amended filing with the final details of the offering before trading commences. Simple, easy, effective. No one wants to mess with the SEC, and so top securities law firms work diligently to ensure that everything is in order when that initial form is filed.

Palantir is not a complicated business. It’s a software business (mostly) today with 125 customers, making real revenues, and with a decent story to tell investors. And yet, you can’t help but look agog at the level of complication and paperwork the company has created for itself by just trying to be a little bit different from everyone else.

One part of that complication was its invention of a direct listing with a lockup. When a company directly lists on a stock exchange, recent tradition holds that insiders are not locked up, which means that they will be allowed to start buying and selling their shares as soon as the company hits the market. For reasons that are known only to Palantir, the company decided to mostly block employee trading, limiting the float that can be expected when it begins trading.

So in today’s 4th amendment to its S-1, we have some updated figures of what the lockup will look like. Palantir will lock up about 80% of shares in the company, allowing about 380 million shares to trade on opening day. Eight million more shares will come on the market in November when certain restricted stock units vest for company employees, and other vested RSUs will also not be beholden to the lockup agreement as they come next year.

In addition to those figures, the company noted that it is pushing back its target opening day from September 23rd to September 29th. So about a week delay, although nothing particularly notable (such changes are often made in these processes).

The direct listing with lockup was complication number one. Complication number two is the absolute byzantine ownership structure that Palantir has selected for itself. In a note added this morning in its filing, the company admits that “This is a novel capital structure that differs significantly from those of other companies that have dual or multiple class capital structures.” That’s quite an understatement.

In Palantir’s governance structure, it will have three classes of shares. Class A shares have 1 vote, Class B shares have 10 votes and Class F shares (for “Founder”) have a variable number of votes that will ensure that Palantir’s founders Alex Karp, Stephen Cohen and Peter Thiel maintain 49.999999% control of the company essentially in perpetuity (or at least until they want to give it up by selling).

Today, the company provided a handy table on exactly what that all means, as it’s not simple at all. Let’s take a look at a cleaned-up version of their voting table, based on which founders are employed at Palantir at a specific time: 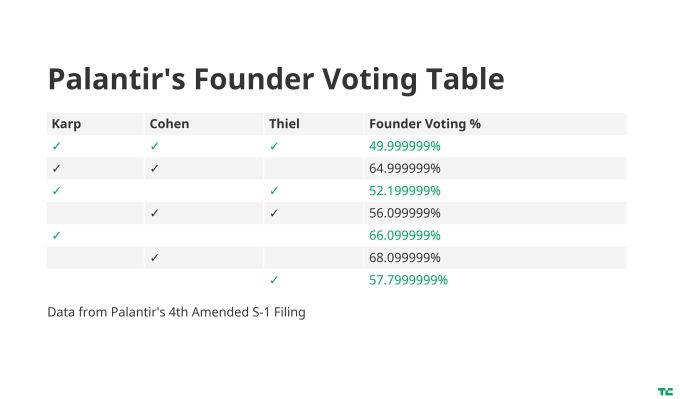 The key here is that so long as the three founders are all actively working at Palantir, their ownership is meant to be capped at 49.999999% of the company. In other words, any other shares they own of the Class A and Class B varietals are included within that ownership number. This is something I have gotten wrong, so mea culpa, although frankly, if you need to file a half dozen amendments to the SEC to explain what you are doing, I feel like I am in good company.

Where it gets bizarre is if one of the three founders leaves. In those scenarios, the three of them collectively will have even more power than if they all actually work at the company simultaneously. For instance, if Thiel leaves the company (which in his case means resigning from the board), the three founders actually increase their voting power collectively from 49.999999% to 64.999999%, assuming Thiel doesn’t sell any of his own shares. What do those calculations ultimately mean? Well, Palantir was gracious enough to put an explanation in its fourth amendment on exactly what it all boils down to:

While the Board retains the power to hire and remove members of our management, which currently includes two of our Founders, the Founders would continue to beneficially own shares of Class F common stock and Class B common stock and be able to exercise control over matters submitted to a vote of our stockholders so long as our Founders who are then party to the Founder Voting Agreement and certain of their affiliates collectively meet the Ownership Threshold on the applicable record date, even if one or more of our Founders resigns from the Company or is terminated. (Emphasis mine)

In other words, if you strike them down, they shall become more powerful than you can possibly imagine, Shareholder.

Palantir in this filing also made clear that there is at least some floor by which the three founders have to collectively own the company. With all three of them onboard, they have to maintain ownership over 100 million shares of the company, or slightly less than 5%. So they can’t, say, own 0.0001% of the company and control 49.999999% of the vote. What a relief!

Look, founder control is a mainstay of modern Silicon Valley tech IPOs. But we’ve never seen such an extensive, interlocking set of systems designed to make a company absolutely impregnable to any form of external governance. I can understand the concerns with Palantir, given its work, its controversies and the extreme media attention it receives. It probably needs some form of governance that provides it stability amidst the maelstrom. But all of this sets such a bad precedent for the rest of Silicon Valley that I hope it’s recognized in their share price.

Updated September 18 to add Palantir’s delay of its opening day to September 29.