Twitter is taking steps to tighten account security for a range of users ahead of the US presidential election, including by requiring the use of strong passwords.

“We’re taking the additional step of proactively implementing account security measures for a designated group of high-profile, election-related Twitter accounts in the US. Starting today, these accounts will be informed via an in-app notification from Twitter of some of the initial account security measures we will be requiring or strongly recommending going forward,” it said in a blog post announcing the pre-emptive step. 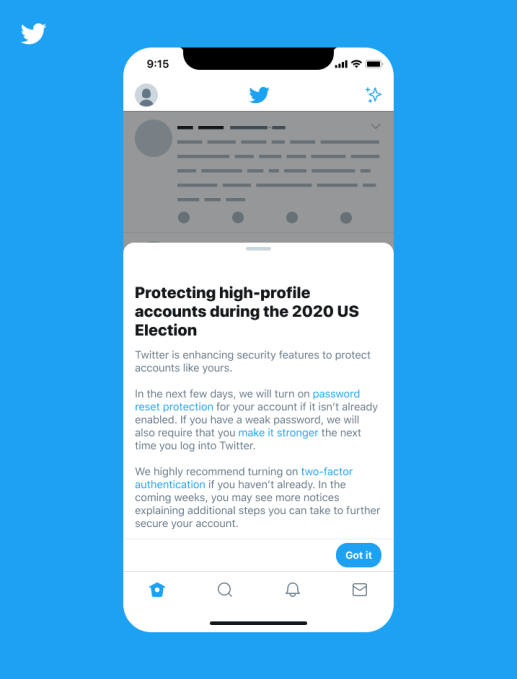 Last month Twitter said it would be dialling up efforts to combat misinformation and election interference, as well as pledging to help get out the vote — going on to out an election hub to help voters navigate the 2020 poll earlier this week.

Its latest election-focused security move follows an embarrassing account hack incident in July which saw scores of verified users’ accounts accessed and used to tweet out a cryptocurrency scam.

Clearly, Twitter won’t want a politically-flavored repeat of that.

Twitter said accounts that will be required to take steps to tighten their security are:

As well as requiring users in these categories to have a strong password — prompting those without one to update it next time they log in — Twitter said it will also enable Password reset protection for the accounts by default.

“This is a setting that helps prevent unauthorized password changes by requiring an account to confirm its email address or phone number to initiate a password reset,” it noted.

It will also encourage the target types of users to enable Two-factor authentication (2FA) as a further measure to bolster against unauthorized logins. Although it will not be requiring 2FA be switched on.

The platform also said it would be implementing extra layers of what it called “proactive internal security safeguards” for the aforementioned accounts, including:

Also today, Twitter released more detail about how its platform manipulation and spam policies apply to groups seeking to coordinate to cause harm, giving the example of the conspiracy group QAnon. It began a crack down on the conspiracy group in July, when it banned thousands of accounts that had been spreading baseless BS which Twitter said had “the potential to lead to offline harm”.

Today we're sharing more about how our Platform Manipulation and Spam Policy applies to groups coordinating to cause harm.

Our Coordinated Harmful Activity framework defines how we evaluate harm and when we'll take action to help keep you safe: https://t.co/3VD1PwArnw (1/3)