After six months of sheltering in place (and now weeks of hiding from wildfire smoke) alongside a toddler who never seems to run out of energy, I’m the last person who would try to make anyone feel bad for giving their kid some screen time.

But if a company wants to build a toy that aims to educate and entertain without the need for a screen, they’ve at least got my attention.

That’s the concept behind Kiri, a company competing in the (first all virtual!) TechCrunch Disrupt Startup Battlefield this week. They’ve put a spin on the classic wooden block, packing it with smarts to help kids learn things like shapes, animals, and numbers in multiple languages without involving yet another screen.

Kiri is built to work alongside an expandable set of RFID-enabled tiles, with each tile representing a different animal, food, etc. Touch the block to a tile, and a built-in speaker announces what has been tapped. 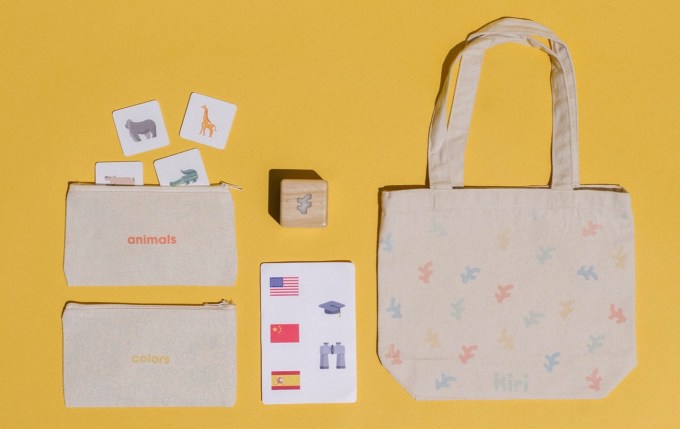 A “mode” card, meanwhile, lets you switch things up with a quiz game (where kids are prompted to find and tap a tile that Kiri knows you own), or quickly shift between English, Mandarin, and Spanish.

The Kiri block itself is deliberately simple; about 2×2″ of smoothly sanded wood, the only visible externals are a few small holes where the speaker vents, a port for charging, and a translucent, color-shifting Kiri logo. Tap the blue tile? The logo turns blue. Got the answer right in quiz mode? Green.

Want to know which words your kid really seems to be getting? A companion app lets parents check in on a kid’s progress (and, of course, order new cards.)

Kiri took its first steps into the world at the end of 2019 with a successfully funded campaign on Kickstarter. They initially intended to ship the first units by April of this year, but the pandemic has thrown a wrench or five in the gears. Kiri’s Nick Porfilio tells me they’re now on track to ship by the holidays.

Kiri’s $99 starter kit comes with the block, a tote bag, and a set of tiles to get you started. The company intends to add more tiles and lesson categories to the mix over time, with an $8 monthly subscription meant to keep things fresh as long as your kid stays interested.

Porfilio also tells me that they’re looking to expand beyond tiles in time, mentioning concepts like Kiri-enabled books and musical instruments. For now, though, they’re focusing on getting their blocks into the hands of those who pre-ordered.