Amazon today announced it will rebrand its kid-friendly services formerly known as Amazon FreeTime and Amazon FreeTime Unlimited to Amazon Kids and Amazon Kids+. In addition to the name change, the services are being redesigned to include a new home screen experience, Amazon Echo integrations, and will introduce an expanded catalog of music and video content.

To date, the services have offered families a way to use parental controls to limit screen time and children’s access to unapproved content and, for paid subscribers, Amazon offers access to a catalog of over 20,000 books, movies, audiobooks, games and Spanish-language content. This paid tier costs $2.99 per month for a single child, or $6.99 per month for a family, if Prime subscribers. Those prices jump a bit to $4.99 per month and $9.99 per month, if non-Prime customers. Discounts for longer time commitments are also available, as with the $69 annual family plan for Prime customers. 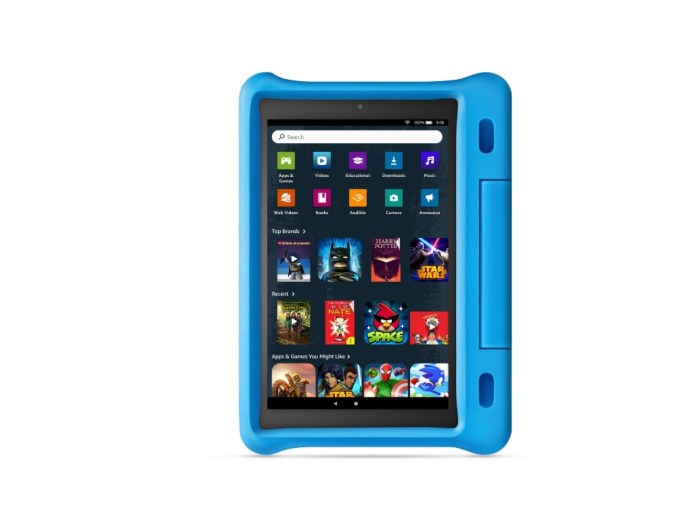 Before, kids would access FreeTime under their own profile on a Fire tablet or, for paid users, through a dedicated app for Android or iOS devices. Going forward, the Amazon Kids+ subscription will continue to work across a range of platforms, including Fire tablets, Fire TV, Kindle, Echo, iOS, Chrome OS and Android devices.

With the update, the Amazon Kids experience for Fire tablets has been redesigned to feel more like a “grown-up” tablet, through a new profile option.

Here, Amazon Kids will organize its various sections  like “Educational,” “Apps & Games,” “Music,” “Videos,” “Books,” and more under colorful app icons. Below these are rows of image thumbnails offering more thematic groupings and recommendations, like a row of “top brands,” the child’s recently viewed content, or a row of suggested games, for example.

Amazon says this profile is best for children 8 and up, as it serves as more of a transitional step between the younger Kids experience and the more traditional tablet layout that parents use. Parents can enable the option under profile settings via the new “Adjust Age Filters and Themes” section in the Amazon Parent Dashboard.

Another new feature brings an Alexa feature to Amazon Kids. If kids have an Alexa device in their home, like an Echo smart speaker, they can use their tablet to broadcast a voice message to everyone in their home through the device’s “announce” feature. Because this feature means Amazon is listening to and processing the child’s voice, it will require parental consent.

Amazon says it’s also expanding its family-friendly content catalog to include hundreds more video titles for kids ages 6 to 12, including gaming playthrough videos plus PG and live-action titles from brands and characters like Angry Birds, LEGO, Transformers, Barbie, Carmen Sandiego and others.

It has also added music stations from iHeartRadio directly to the Amazon Kids homescreen.

The rebranding is notable as it represents yet another company that’s adopting the “plus” symbol (+) to indicate a service offers premium content available upon subscription. We’ve already seen several streaming services use this same sort of branding, like Disney+, ESPN+, TiVo+ and Apple TV+, for example.

Amazon says the full rebrand will roll out over the next several months, but the new home screen option and Alexa integration will become available within weeks.