Toucan has developed a Chrome browser extension designed for anyone who wants to learn a new language but hasn’t found the motivation or the time.

Once installed, the extension scans the text of any (English-language) website you’re visiting and will automatically translate some of the words into the language you’re trying to learn. If you mouse over the word, you’ll see the original English word. Think of it as a browser-based version of language flashcards.

Nieman’s past roles include business development roles at Headspace (where Dietz was a senior product manager), startup studio Science and car leasing startup Fair.com (where Merritt was an iOS developer). She told me that one thing she learned from across all those experiences is “habit formation — how hard it actually is to do anything that steals people’s time.”

Dietz made a similar point, arguing that while language learning software like Rosetta Stone and Duolingo has had its share of success, “It’s just such a high ask to get people to change their behavior and go to this one website,” particularly on a daily basis.

So Toucan is designed to help users learn a new language (it currently supports Spanish, French, Italian, German and Portuguese) while they browse the web as they normally would, without having to change their behavior. 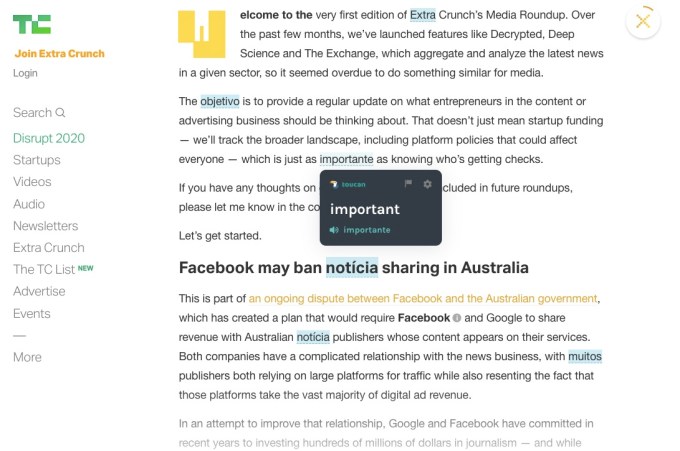 Nieman said the extension can be used to solidify and expand your vocabulary as you take digital or in-person classes. Or if you’re not taking classes, you can still use Toucan on its own, and it can help you achieve (as Dietz put it) “that magic moment of realizing you know a few words in other people’s languages.”

To ensure accuracy, the company works with teams of translators, including college professors and students, while also employing natural language processing to understand the context in which words are appearing. Users can also report words that are incorrectly translated.

And Toucan is experimenting with fun ways to promote itself, including the ability to “own” a word, so that for a week, your name appears anytime a word is translated by Toucan. In fact, the Toucan team has gifted me the word “writer” — but since ownership is currently free, I guess it’s not a bribe?

Eventually, the company could charge people and businesses to own (a.k.a. sponsor) certain words. In addition, users can sign up for a premium subscription that gives them access to additional vocabulary. Dietz suggested that Toucan will continue exploring different business models, but he said the team is committed to “accessible” education and will keep “a large chunk” of the offering free.

Looking ahead, Toucan is planning to add new languages and to launch browser extensions for Firefox and Safari. And eventually, Nieman said the startup could apply the same approach to other subjects, “history or science or math or general knowledge.”