It’s no secret that the tech industry is historically white, straight and male.

Despite promises to examine and reform hiring practices so that tech companies big and small better reflect the world we all live in, diversity reports chart a different path: Black, brown, female and LGBTQIA+ folks aren’t getting their representative seats at the table.

And now, in the wake of a national response to the killings of George Floyd, Breonna Taylor and Tony McDade by police that has seen millions engage in protests and a seemingly sudden awareness of just how racist the world is, the tech industry has found itself dealing with a crisis of conscience.

Leadership in companies everywhere have held meetings — sometimes putting folks of color in the hot seat — to discuss ways to improve awareness around race and devise plans to implement those initiatives (disclosure: I attended one hosted by TechCrunch’s parent company Verizon). HR departments are checking in with staff to somehow ascertain how to improve their modes of operation.

It is in this climate that TechCrunch is reporting our 2019 events and staff diversity numbers – the fourth such report since we started tracking – which you can see below. To collect this data, we distributed anonymous, volunteer surveys to the panelists, judges and Battlefield competitors at all of our events. We also distributed a form to staff, which was also volunteer and anonymous.

In 2019, we produced six events in three countries in 2019: Disrupt in San Francisco and Berlin; Sessions Robotics, Mobility and Enterprise were held in the Bay Area; and a regional Battlefield in Shenzhen.

Our events draw folks from every corner of the startup world. Whether a founder, an investor onstage or an attendee interested in technology, our events have long served as a place where people could come together to get advice, network, watch the best startups compete on our Battlefield stage and hear from the biggest names in tech.

Our priority at our events is to amplify the voices that have been silenced by the majority. While we continue to see an increase in the number of people of color and white women at our events, we acknowledge that we are still not where we want to be.

Below are the demographic data on panelists, judges and Battlefield competitors from our 2019 events.

For almost 10 years, TechCrunch Disrupt has provided a space for startup founders and investors to exchange ideas, make connections, examine the tech industry and compete on the Battlefield stage. Hundreds of startups across a variety of categories tell their stories to the 10,000 attendees from all around the world.

In 2019, we hosted our Hardware Battlefield competition in Shenzhen, which saw 11 companies take the stage and pitch to a panel of judges. Three (27%) of the 11 founders identified as female and seven (64%) identified as a person of color.

To complement the pitch competition and highlight the issues faced by those in the Chinese ecosystem, we invited top speakers from the startup world in China and beyond to grace our stage. Of the 39 speakers and judges who self-reported, four (10%) identified as women and 26 (66%) identified as a person of color. 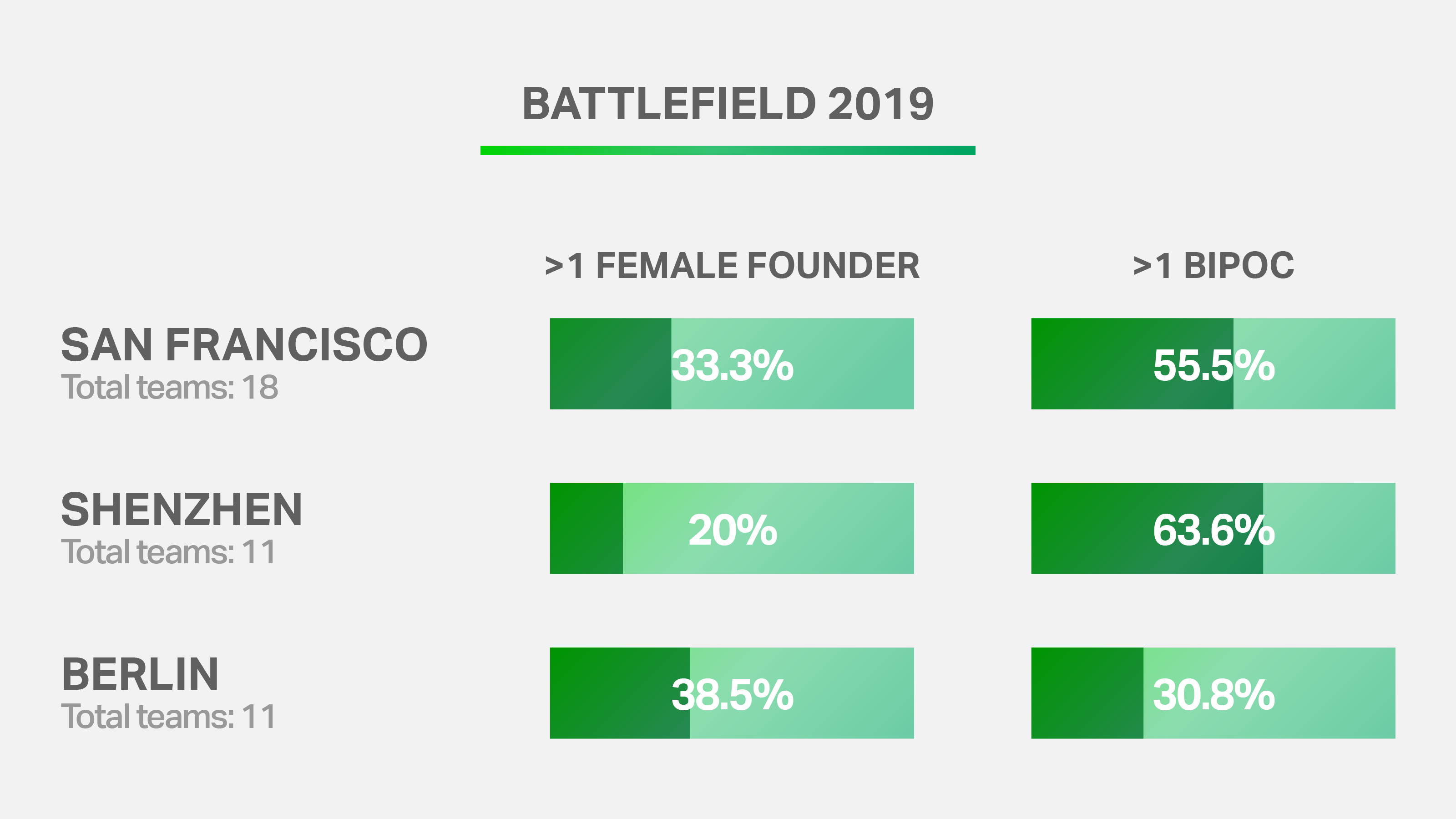 Our Sessions events are daylong programs dedicated to the popular topics that bring founders, engineers, investors and academics to one place.

TechCrunch Sessions: Robotics continues to be a popular event no matter where we host it. In 2019, Robotics returned to Zellerbach Hall on the campus of UC Berkeley. Of the 32 speakers who self-reported, eight (25%) identified as female and 11 (34%) identified as a person of color. 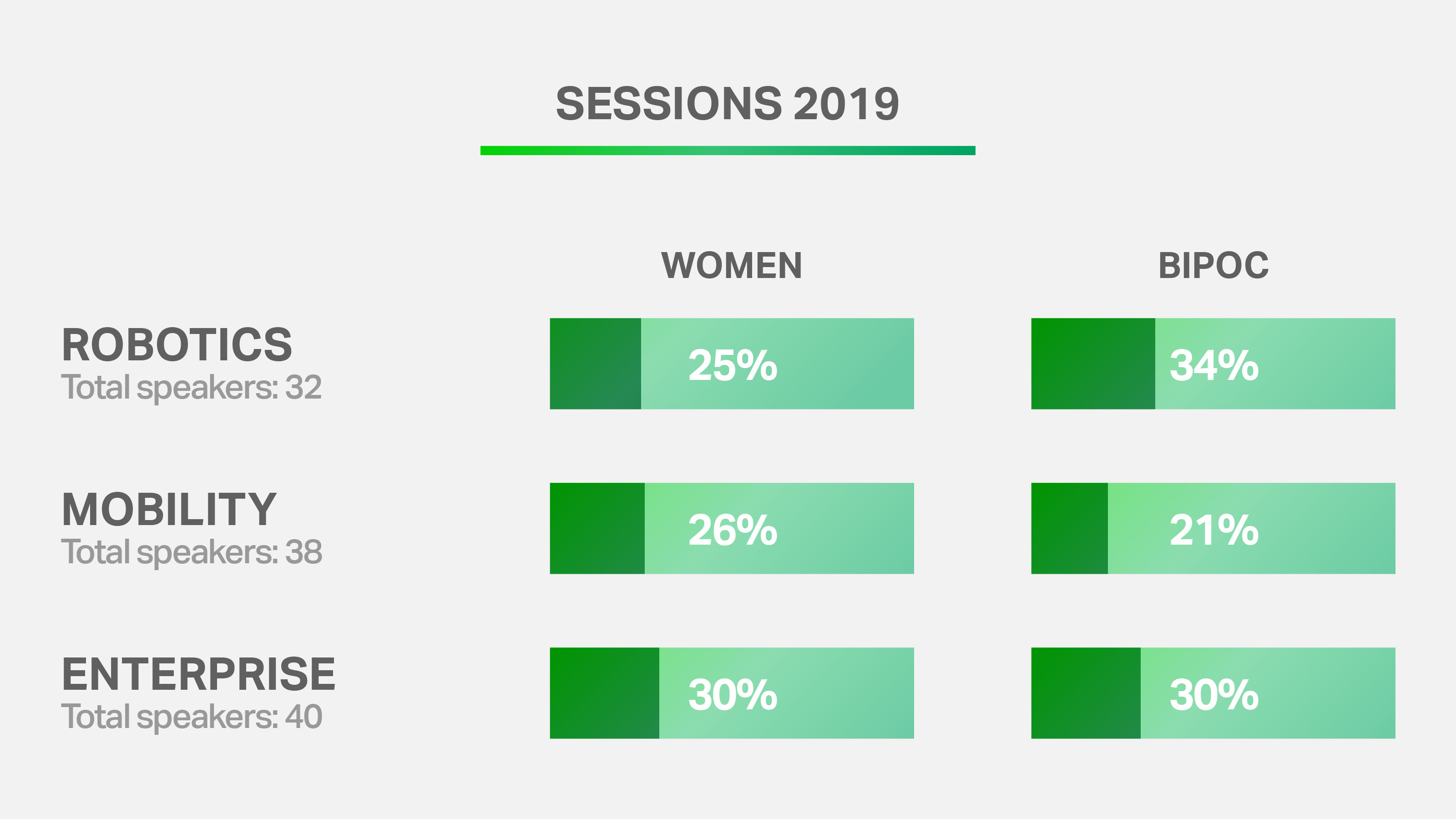 TechCrunch Include aims to promote diversity by applying resources uniquely available to TechCrunch, including our editorial and events platforms, and by exemplifying the diversity mission in TechCrunch’s own staffing and culture.

In 2014, we launched the Include program as a donation vehicle. It evolved from that into version 2.0, during which we realized the fulfillment of our plan to be transparent and remain proactive about our diversity and inclusion efforts at our events, on our staff, and in our editorial.

Now, Include 3.0, which launches at Disrupt 2020, we will continue to pursue a collaborative and open relationship with the broader community through partnerships with founder and support organizations, and investor groups.  Founder organizations will have the opportunity to nominate early-stage founders to participate in the program as well as serve as advisers to TechCrunch Include. Investor groups commit to establishing lasting relationships with founders in the program and to uphold accountability for representation within their organizations and their investment portfolios. And support organizations provide educational resources and mentorships to strengthen and advise the program including all who participate.

Everyone should have access to the immense possibilities that the tech industry provides, but for the actual numbers to reflect this requires actively addressing the very unconscious biases that have contributed to rampant inequality.

At TechCrunch, our own diversity does not yet reflect this. In 2019, we surveyed our staff, and the results tell us that we have fallen well short of the goal we set. Of 71 editorial, events, business and sales staff, 44 completed the voluntary survey: 70% of the respondents identified as white, 36% identified as women, and 18% identified as LGBTQ+. 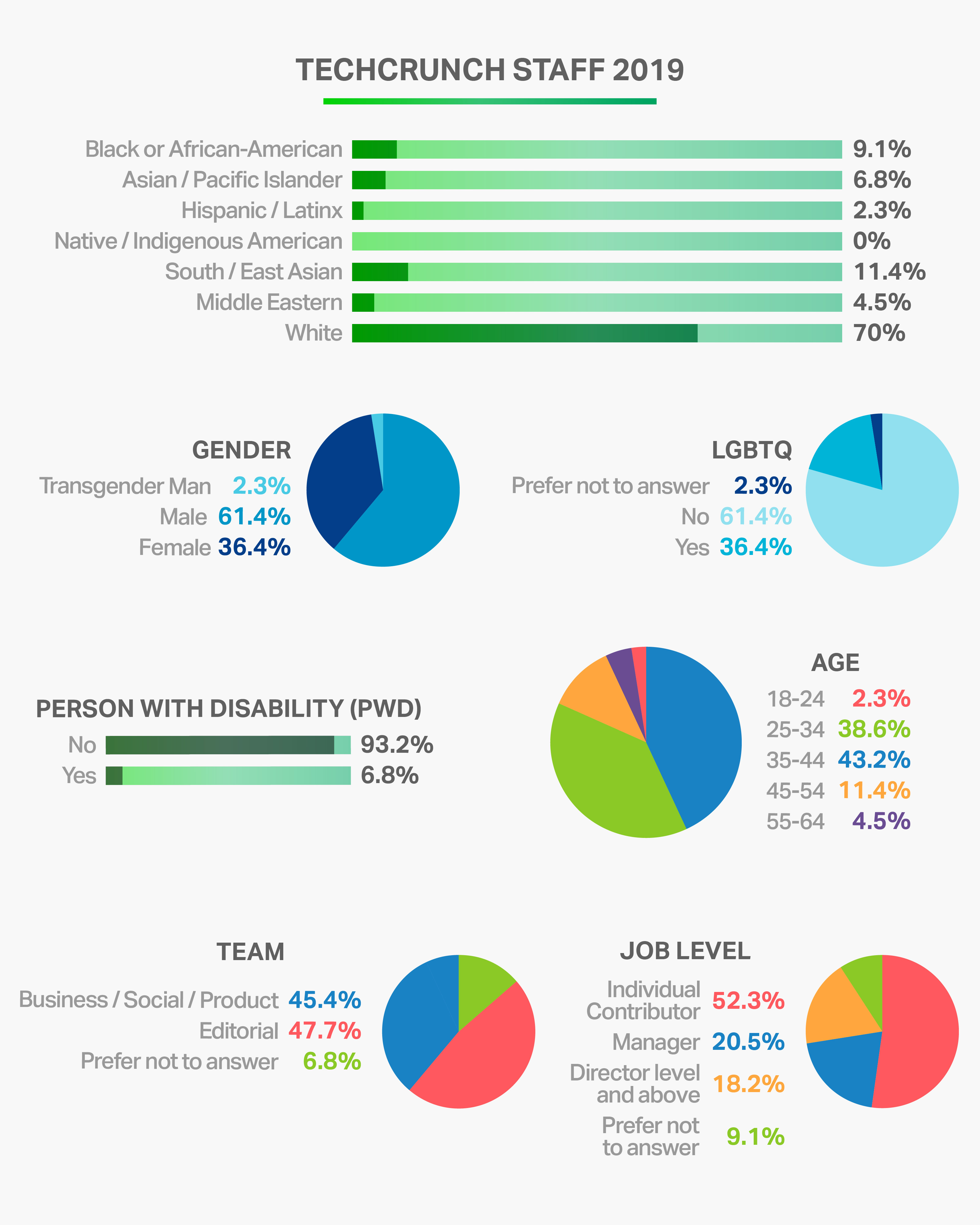 We understand that diversity is vital to the pursuit of equality, and while we can look at the last few years and see slight improvement, it is just that: slight. We need to focus our efforts so that our stages and our staff represent more accurately the world in which we live. We are not there yet.

Already in 2020 we have produced two events: Sessions: Robotics in at UC Berkeley — just before California Gov. Gavin Newsom ordered the state to shelter-in-place — and Early Stage, which we produced virtually. We are on track to improve our diversity numbers not only in events but also on staff and we will report them in January 2021.

As Black Lives Matter protests in response to police brutality continue amid a worsening global pandemic, TechCrunch will continue to produce events that showcase the diverse talent in the startup community.

And at the foundation will be a small but mighty team focused on the present so we can bring you the future.