Lucid Motors CEO and CTO Peter Rawlinson had a clear vision for how to take an electric car to another level. The former chief engineer of the Tesla Model S just didn’t expect it to take quite so long.

Today, nearly four years since the company first announced its intentions to produce electric vehicles, Lucid Motors revealed the final version of its all-electric luxury Air sedan. The Air has eye-popping performance specs, an estimated range of up to 517 miles and a design that manages to balance technology and luxury without feeling opulent or cluttered.

The Air is meant to be an EV replacement to the Mercedes S Class — an electric vehicle category that Rawlinson says has not existed until now.

“Tesla (Model S) is premium, it’s beautifully engineered and it’s super disruptive, but it is not an S Class Mercedes replacement in the EV space and that’s what we’re offering,” Rawlinson said in a recent interview ahead of the September 9 reveal.

The Air is dripping with luxury in an understated way. It’s spacious inside the cabin, the result of what Rawlinson and VP of design Derek Jenkins have described as a clean sheet approach. The company has “redefined the three-dimensional puzzle that is a car through the miniaturization of electric powertrain and that’s making the space concept work, where the car is more compact on the outside, and bigger on the inside,” Rawlinson said, who added that it’s shorter and narrower than the Tesla Model S or the Porsche Taycan.

The vehicle’s four variants offer a variety of performance levels all via its dual-motor, all-wheel drive architecture. The Dream edition boasts 1,080 horsepower and can travel from zero to 60 mph acceleration in 2.5 seconds. As a result of the power, the Dream edition has 465 miles of range. Meanwhile, the Grand Touring has 800 horsepower and can hit that same acceleration in 3 seconds, but has the highest range of 517 miles.

The Air will be loaded with 32 sensors, a driver-monitoring system and an Ethernet-based architecture all for its advanced driver assistance system, which is designed to support hands-free driving on highways.

Inside, a 34-inch curved glass 5K display sits in front of the driver, and appears to float above the dashboard. Another center touchscreen is retractable, revealing more storage. Meanwhile, a few physical controls remain on the steering wheel and just above the center screen to control volume and activate the ADAS and Amazon Alexa, which is integrated into the vehicle. Below that center touchscreen and moving to the console is a spot for inductive charging, cup holders and USB-C ports, along with additional storage.

Owners of the Air will have an app that will control and communicate with the car, such as locking and unlocking the vehicle. But it will also be equipped with facial recognition that confirms the identity of the owner. 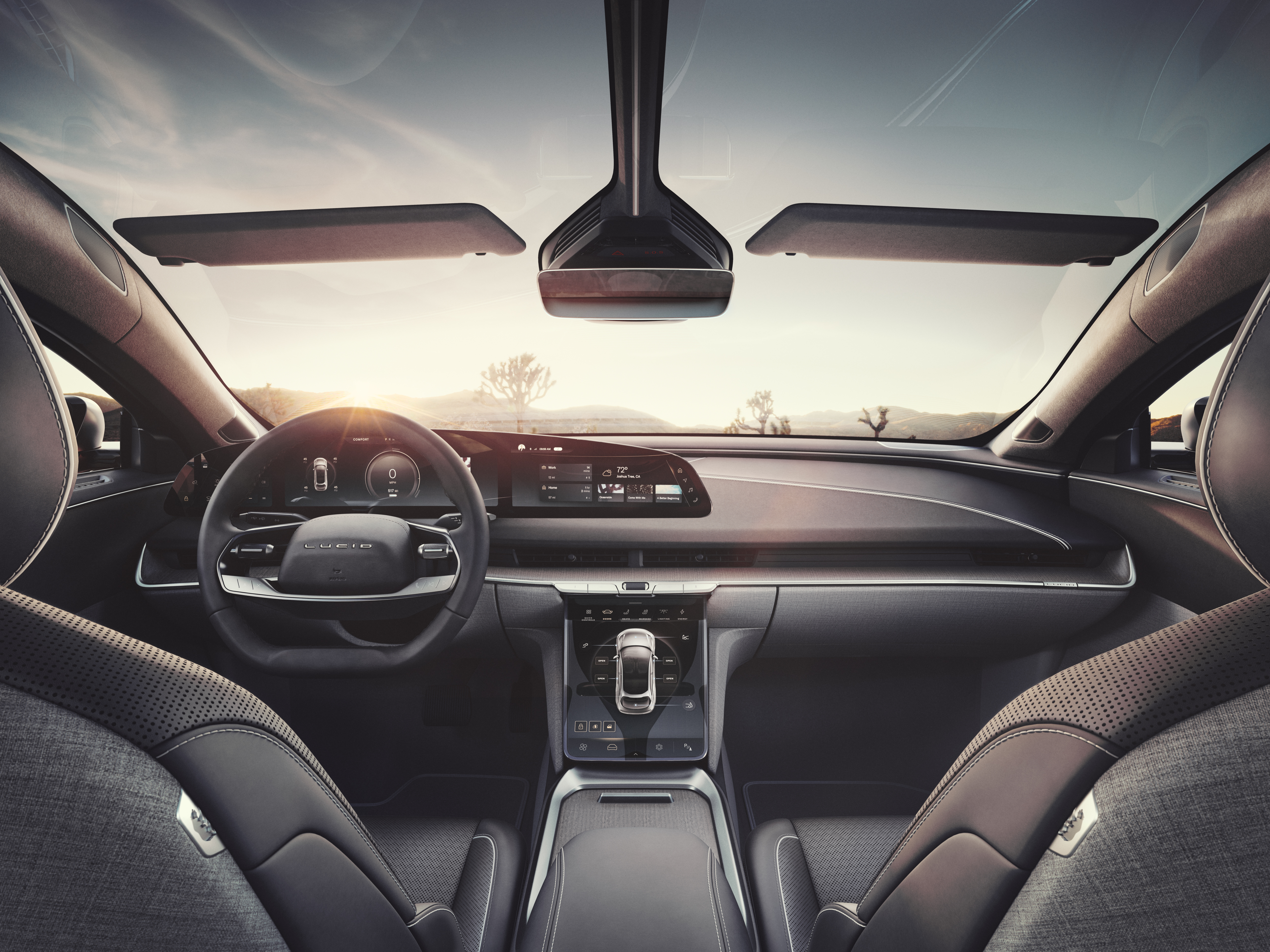 It’s been an epic journey for the company that started in 2007 with a different name and mission. Lucid began as Atieva, a company founded by former Tesla VP and board member Bernard Tse and entrepreneur Sam Weng that focused on developing electric car battery technology. That early work would be critically important for the Lucid Motors of today because of the early research, development and eventual progress in the components and overall electric architecture, Rawlinson told TechCrunch. Atieva would go on to become the battery supplier to Formula E, which would also help the company make gains on the design and performance.

But it was in the waning months of 2016 that Lucid came out with a bang and a new publicly stated purpose to make electric vehicles (although the company had already been working quietly at this for a couple of years). Rawlinson, who left Tesla to join Lucid in 2013 as CTO, was one of the driving forces behind this new mission. He later took on the CEO title and responsibility as well. In those early days, Lucid looked well on its way to the difficult and expensive task of becoming a car manufacturer.

“Who would be crazy enough to start a car company?” Rawlinson told TechCrunch recently. “We came out in early 2017 with high hopes and it took us longer to find the right investor.”

That is a slight understatement. Soon after the name change, Lucid announced it would build a factory in Arizona and showed off an alpha prototype of the Air (in which I rode in late 2017). But then progress on capturing investors slowed and then stalled altogether.

“At that stage, I think the investment community was in love with the idea of autonomous driving and robotaxis,” Rawlinson said. “No one believed there was still some mileage to getting a better electric car. And I kept plugging that it hasn’t been done yet. Tesla’s doing a great job, but they haven’t really cracked it, there’s so much more that can come out of the electric car — and it fell on deaf ears.”

It would take months to land an investor, putting the factory project in limbo. “Those were our darkest hours as a company,” Rawlinson recalled.

In September 2018, Lucid announced that Saudi Arabia’s sovereign wealth fund had committed to invest $1 billion into the company. The  announcement came just six weeks after Tesla CEO Elon Musk tweeted that he was considering taking Tesla private at $420 a share and had secured the proper funding to make the leap. Musk suggested that Saudi’s wealth fund, which already owns almost 5% of Tesla stock, was interested in backing the company’s move from public to private.

The $1 billion investment deal between Lucid and the Saudi wealth fund closed in spring 2019. The funding was used to complete engineering development and testing of the Lucid Air, construct its factory in Arizona, begin the global rollout of its retail strategy starting in North America and enter production.

With the Air finally on display, Lucid now must turn its attention to the next task — production and delivery rollout.

Lucid Motors’ second vehicle is an electric SUV, the Gravity