Reducing consumption by expanding the notion of the rental economy and giving people access to tools and equipment has been something of a startup holy grail for some time.

It’s a model that’s worked famously well for fashion and accessories (just ask investors in Rent the Runway), but has had not had the same resonance for white label goods.

The Shed, out of Richmond, Va., hopes to change that.

Launched by Karen Rodgers O’Neil, a longtime marketing executive, and Daniel Perrone, a serial entrepreneur and technology executive whose previous company, BroadMap, was acquired by Apple; The Shed hopes to take the rental model that Home Depot has turned into a billion dollar business line and take it to the masses.

Unlike Home Depot, The Shed touts its presence in eight categories. Stanley Black & Decker is a marquee early partner and the company’s executives said that others have come on board.

“We don’t buy product,” said Perrone. “We take delivery of all the products and rent them out in the local marketplaces where we do business.”

The only thing the manufacturer provides is the products and some servicing starter kit so that The Shed and its employees can manage and maintain the product. 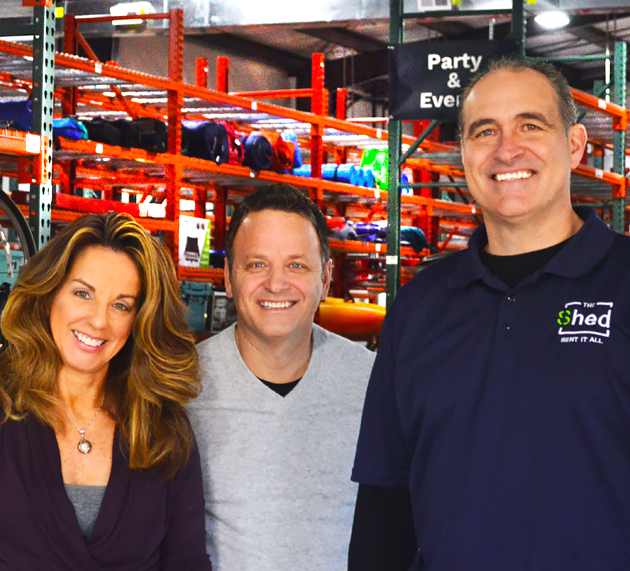 Since its launch in April the company has expanded beyond its Richmond, Va. home base to Denver — and will be looking to expand further into Portland, Austin, and San Jose, according to Perrone.

Among the features that the company intends to roll out as it expands is a dynamic pricing capability that will enable manufacturers to wring the most out of their goods when they’re in high demand.

Rodgers O’Neil came up with the concept back in 2012 when she was working as a marketing executive for General Electric out of Boston.  Perrone met Rodgers O’Neil at a networking event in Boston and became convinced that her notion of offering more rental options to encourage a more circular economy and reduce consumption was something that could resonate with consumers.

To be sure, The Shed isn’t the first company to attempt to bring the rental business to a broader array of consumer products in an effort to cut down on consumption. The Los Angeles-based startup Joymode was attempting to do much the same thing. That company sold to an early stage investment firm out of New York.

Joymode’s chief executive, Joe Fernandez spoke about the difficulty of running the business. “Part of the thesis was that by making things available for rental, people would want to do more stuff,” said Fernandez, but what happened was that consumers needed additional reasons to use the company’s service, and there weren’t enough events to drive demand.

By contrast, The Shed isn’t owning any of the inventory, just acting as a broker and managing inventory between local retailers and manufacturers who want to take advantage of the company’s service.

In addition to Stanley Black & Decker, companies like Primus camping equipment have placed their products on The Shed along with Mobility Plus, which added wheelchairs and mobility scooters; and Replacements, the largest china dealer in the country, which is offering a “Party in a Box” for dinner, cocktail or tea parties.

To date, the company has raised $1.75 million from investors and entrepreneurs from the Richmond, Va. area. Now, with 60 manufacturers on board and another 15 to 18 vendors signing up monthly, the company is looking to expand even further.

“I joined with Karen because I saw that this would be a game changer in the rental space,” said Perrone. There are a number of retailers in specific verticals that still don’t transact online, so The Shed becomes their avenue to reach the market, he said.