Daybridge, a productivity and time management app by former Monzo engineer Kieran McHugh, has picked by £750,000 in a seed round led by early Monzo backer, Passion Capital.

Also participating is a number of London-based angel investors — including, I understand, other Monzo alumni. Passion Capital’s Eileen Burbidge has joined the Daybridge board.

Started as a side project while McHugh was still heading up Monzo’s open banking team, Daybridge’s ambition is to create a digital assistant to help people better manage their time. Yet to publicly launch, the app’s functionality spans a calendar, to-do app, journal, event planning, and time-tracking.

The broader vision, McHugh tells me, is for Daybridge to become an app users can “lean on as a source of truth” for how they’ve been spending their time and plans they have coming up.

“I started Daybridge because I became increasingly frustrated with the lack of progress and innovation in productivity and time management apps,” he says. “I felt that there was nothing available on the market that even remotely met my needs as an individual wanting to get organised. The apps already out there felt so antiquated and far removed from real life that I decided to throw everything out and design an ambitious new app from first principles”. 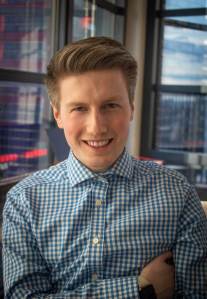 McHugh spent almost 6 months refining the idea, building prototypes, and putting together a design system, before at some point realising he hadn’t actually shown his work to anyone else or sought feedback. So, to help validate the idea, he put together a landing page and tweeted it out in mid-June. “Needless to say, I was quite overwhelmed by the response,” he recalls, “we’ve had over 10,000 sign-ups to the waiting list”.

That was enough to give McHugh the confidence he needed to leave his job to focus on Daybridge full-time. “Leaving Monzo was a really tough decision, but the team were incredibly supportive and excited for me. Working there for three years was probably the best education in building highly scalable user-focussed products that anybody could ever ask for. I think I’m well positioned to take a piece of Monzo’s culture and their approach to engineering and design, and apply that in a whole new context”.

Right out of the gate, McHugh is sure about one thing: an app alone can’t make you productive or organised, “in the same way that banking apps can’t make you good with money”. Instead, he believes that a really well designed app can provide “the rails, tools, and nudges to help you keep on top of things and form healthier habits”.

Meanwhile, in the short term, McHugh expects early users of Daybridge to be “prosumers,” who he characterises as people that already have a pretty strong grasp of their time. “They probably already have some sort of digital productivity system, or maybe they use a bullet journal,” he says.

In the longer term, however, Daybridge isn’t intended to be a prosumer or enterprise product, but something lots of people will rely on every day to help manage their time.

Adds the Daybridge founder: “This is going to mean re-engaging people who’ve tried and failed to get traction and build habits with other products because the amount of effort required to maintain them just isn’t worth the payoff. I think there are a lot of people out there on the hunt for an app like Daybridge — they just haven’t found it yet”.