Black women are underfunded and under-appreciated in tech. Since 2009, Black women have received just .06% of all venture funding, according to digitalundivided’s 2018 report. That’s despite a 50% increase in new Black women-owned businesses from 2014 to 2019, according to American Express.

“It was very important for us to be able to give different ranges of talks,” Domonique Fines, co-creator of the event, told TechCrunch. “I wanted people to see there are Black women founders out there. They might not all have the same path, but just because you don’t have the same path, it doesn’t mean you won’t have that same success.” 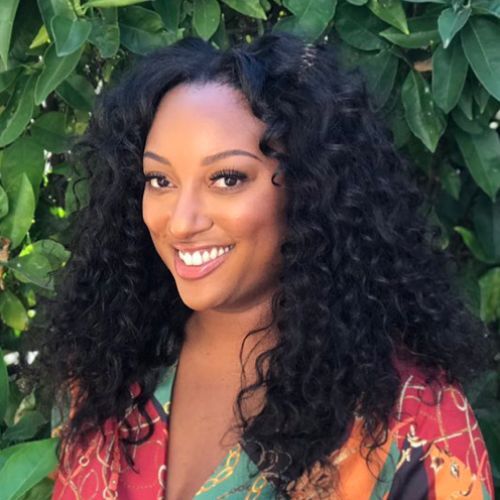 Domonique Fines, All Raise director of Engagement and co-creator of When Founder Met Funder. Image credit: All Raise

Before joining All Raise, Fines spent a few years at Y Combinator as the Silicon Valley accelerator’s director of events.

“As the batches got larger and larger, I started seeing less and less Black women,” Fines told TechCrunch.

When Fines would come home to Oakland after a YC event, there would be a lot of Black women around, she said. But for the Black female founders elsewhere, there just wasn’t a space for them to go where they could “feel comfortable asking the question they needed the answer to without feeling like they’re less than,” Fines said.

That was her passion, Fines said. Meanwhile, Megan Holston-Alexander of Andreessen Horowitz’s Cultural Leadership Fund and Planet FWD founder Julia Collins were already volunteering at All Raise as Fines joined All Raise from YC.

“So it was one of those things where we just kind of put all of our heads together,” Fines said. “We wanted to make sure that we could do something that’d be super tactical and useful, but also make it not just an event. It’s an experience and we want to make sure that Black women are just getting the help they need all year-round.”

In addition to the event, a Slack group formed this year to help determine the next steps for the community. Some of the ideas floating around right now are founder bootcamps, adding more speakers to the event, facilitating better networking and workshops. But it’s ultimately up to the group’s collective conscience.

“I’m planning on polling them to find out exactly what the need is right now,” Fines said. “And then it just changes every day, like depending on what’s going on in the world. It’s one of those things where we just want to make sure that what we’re doing for them is super useful.”

“It’s one of those things that people need a lot of assistance with,” she said. “But they also need someone that’s going to be truthful and honest with them about it.”

Seibel touched on that element of honesty in his chat with Collins during the event. He told a story about what it was like when he was fundraising for his startup.

“When I started doing startups, it was 2006 and there weren’t many people who looked like any of us that were doing startups,” he told the audience. “I think what you would’ve expected was overt discrimination but actually I got something else, which was no feedback.”

He went on to say that people were afraid to be critical of him, for fear of being perceived a certain way.

“People were afraid of being critical with me,” he said.

That’s partly why Seibel says he’s become the type of person who will tell founders what everyone is thinking.

“Agree with it or disagree with it, I want you to have a good mental model of what people are thinking and not saying,” Seibel said.

Throughout the day, there were 120 founders and 40 VCs at the event. The next step for Fines is to get their consent to give their contact info to venture capitalists.

“I noticed a lot of VCs definitely want to continue the conversations but I want to make sure that all of the founders feel comfortable with that as well,” Fines said.

Next week, Fines plans to send out the poll to founders to better understand their needs and where to take the initiative from here.

“I want to make sure that we still keep our community tight knit,” Fines said. “I want them to continue to push and keep talking about it because this is not something that’s going to be an easy breezy thing. It’s going to be ongoing and forever.”