Apple is introducing a change to how subscriptions work. No, it’s not lowering its cut, despite the government’s antitrust investigation and its lawsuit with Epic. It announced that developers will be able to offer subscriptions via a new feature, called offer codes. These one-time use codes can be used digitally or printed out for use at offline events, allowing developers to more easily distribute either free or discounted subscriptions to customers.

The company says the feature can help developers acquire, retain and win back subscribers.

Developers will be able to choose from one of three different pricing options for the new codes, which can be set to whatever duration the developer chooses. A free offer code will allow subscribers access to the service without charge for a specific trial period. A pay-as-you-go offer would allow the subscribers to pay a discount during each billing period for a specific duration, like a $1.99 per month trial that converts to a $9.99 per month standard subscription after a few months, for example. The third option is the pay-up-front offer, which allows subscribers to pay a one-time price for a specific duration, like $9.99 up front for a six-month subscription. When the subscription renews, the developer could then introduce standard pricing. 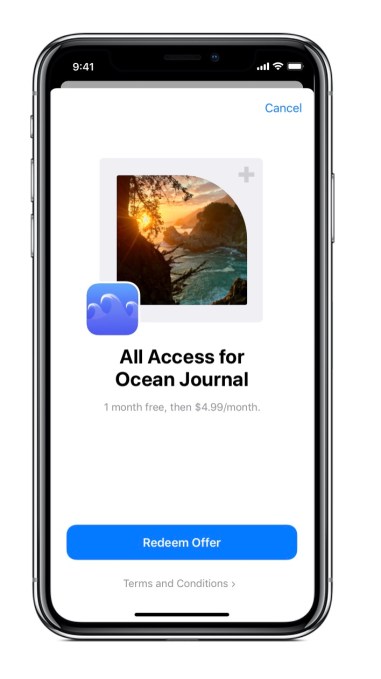 The offer codes can be distributed digitally, like through email, or they can be handed out at events, or even provided alongside a physical product — like a hardware device that also includes a subscription component, perhaps.

The codes will expire after a maximum of six months after creation. Customers can only redeem one code per offer, but they may be eligible to redeem multiple offers for a single subscription, depending on the developer’s configuration choices.

Customers can redeem the codes on iOS 14 and iPadOS 14 and later by way of a one-time code-redemption URL, or within the developer’s app if they’ve implemented the API designed for use with the feature. Apple then handles the rest of the redemption experience, including displaying the offer details screen, with app icon, subscription display name, duration and pricing.

The feature requires that developers set up their server to validate the receipts and receive status update notifications, which could leave out smaller developers or those who don’t run a server for their app.

With offer codes, the developer can also opt to provide a different experience to those who enter the app as a first-time subscriber, highlighting the value of a paid subscription and its features, for example.

The new offer codes will join Apple’s other two existing subscription offers available today, introductory and promotional. Developers can provide any combination — or all three — types of offers at once, depending on their business goals, Apple says.

Developers have wanted more flexibility over how they can present their subscriptions to end users, as it can often be difficult to convince a user to pay for a subscription until they spend time using the app.

However, the offer codes don’t address some developer complaints that Apple’s subscription cut is too high at 30% for year one, followed by a drop to 15% for year two and beyond. When developers are doing the real-world work to find their customers and market their app — like sending out emails or attending trade shows, for instance — they could send those newly acquired customers through their own payment mechanism, too, if Apple allowed it… or so the argument goes. Offer codes, meanwhile, represent one of the ways Apple is working to help direct new subscribers through its own payment mechanisms, Apple Pay.

Apple says the new offer codes will be available soon.