Narrative has raised $8.5 million in Series A funding and is launching a new product designed to further simplify the process of buying and selling data.

I’ve already written about the company’s existing marketplace and software for managing data transactions. With the new Data Streams Marketplace, the process should be simpler than ever — not much different than buying products on Amazon.

“Essentially, the idea was to take the best parts of the e-commerce and search models and apply that to a non-consumer offering to find, discover and ultimately buy data,” founder and CEO Nick Jordan (pictured above on the left) told me. “The premise is make it as easy to buy data as it is to buy stuff online.”

For example, Jordan showed me how a marketer could browse and search for different types of data in the marketplace. Once they find something they want to purchase (say, the mobile IDs of people who have the Uber Driver app installed on their phones, or the Zoom app) at a price they’re willing to pay (usually via subscription), they can just add the data set to their shopping cart, enter their credit card information, accept the terms of service and check out.

In Jordan’s view, this approach has become more attractive in recent months, because with all the uncertainty, companies need more data, and they need it quickly. For example, he suggested that a large company spending tens of millions of dollars on advertising “needs a way to find and buy the data almost programmatically and have the whole thing take five minutes instead of five months — those are the orders of magnitude we’re talking about here.” 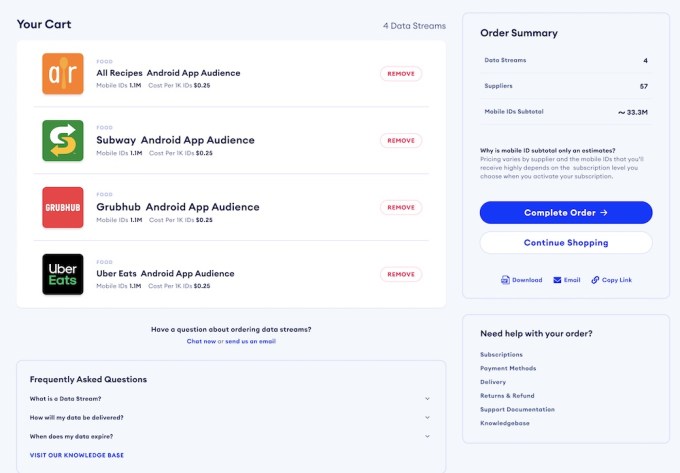 This data is generally sold by third-party sellers who are vetted by Narrative before they join the platform. Jordan also said the marketplace allows buyers to learn more about who they’re buying data from and even to establish a direct relationship — something that could be important for understanding things like regulatory compliance and data quality.

Although Narrative works to “deeply understand [sellers’] data collection methodologies,” Jordan warned, “There’s not necessarily a silver bullet for things being safe from a regulatory perspective.”

Similarly, he said that Narrative isn’t going to be grading the quality of the data sold on the platform. He argued, “Data quality is in the eye of the beholder. Someone’s signal is someone else’s noise.”

The goal with both of these issues is to provide transparency and allow buyers to do more research when necessary. Jordan also said Narrative is building out a marketplace of third-party applications — and that could include applications that score the quality of a data set.

“In the long run, I can imagine a number of use cases that’s almost infinite,” he said.

Narrative had previously raised $5.3 million in funding, according to Crunchbase. The Series A was led by G20 Ventures, with additional funding from existing investors Glasswing Ventures, MathCapital, Revel Partners, Tuhaye Venture Partners and XSeed Capital.

Jordan said the new round will allow the company to hire in areas like product, engineering, sales and marketing. He also noted that Narrative has long prioritized hiring team members from across North America, and recently it’s been placing a bigger focus on outreach and hiring from underrepresented groups.

“It’s easier said than done,” he acknowledged. “Any company that’s doing it well has to make it a priority and not just something they hope happens.”