Messenger Rooms, Facebook’s social Zoom competitor, is today rolling out new features aimed at making Rooms easier to both create and discover, as well as those for further personalizing your Rooms experience. The changes follow Messenger’s recent slight dip from the top of the U.S. App Store charts, where typically it ranks in the top 10. Last week, the app got as low as No. 15, according to data from mobile data and analytics firm App Annie.

The app has since re-entered the top 10. But as virtual school begins in the U.S., it could see usage decline as kids grow more comfortable with alternative solutions, like Zoom and Google Meet, and begin to use them for after-school chats, as well. Already, Meet has climbed to No. 15 as some schools started classes in August, for example. And Zoom is No. 1 on the U.S. App Store.

The new version of Messenger Rooms will now display the Rooms you’ve been invited to up at the top of your Chats tab in your inbox to make them easier to find. It will also make the ability to create a new Room more visible, by placing the option front and center in the Chats tab.

Other changes impact Rooms management. You can now create a Room with a default, suggested or custom activity, set a future start date and customize your audience selection, Facebook says. In addition, the Manage Rooms feature will let you view,  join, edit or later delete the rooms you have created, or invite more people to join an existing Room.

A Share Rooms option will also make it easier to send a notification to a friend to remind them of their invite. 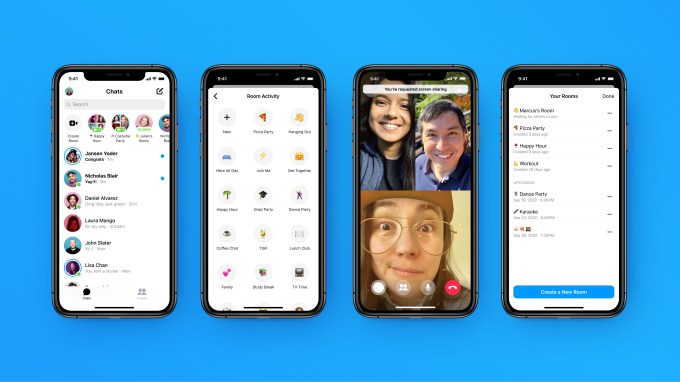 On the personalization front, Messenger is beginning to roll out a new way to customize your own Rooms experience. You’ll now be able to decorate the background of the Room with your own photos, in addition to the previously offered options to use 360-degree backgrounds and mood lighting filters.

Not coincidentally, Rooms rival Houseparty recently introduced a new personalization feature of its own: Frames, which are original collections designed by independent artists for use as video chat backgrounds.

Facebook rolled out Messenger Rooms globally this May, with the aim of offering a social video chat experience amid growing popularity for video communications seen during the coronavirus pandemic. The health crisis has led to sharp increases for Messenger competitors, including not only Zoom, which continues to sit at the top of the U.S. App Store, but also social video apps like Houseparty, Fam, Bunch and many others. Gen Z users are also increasingly socializing on non-Facebook properties, including TikTok and even gaming platforms like Roblox and Fortnite. That means Facebook could be losing its grip on the network effects by being tied to Facebook that helped make Messenger a top mobile app.

The company seems to be aware of that potential concern. Earlier this month, it began integrating the chat systems for Instagram and Messenger, to help Messenger retain its top app status.