We are continuing to make progress through Palantir’s leaked S-1 filing, which TechCrunch attained a copy of recently. We have covered the company’s financials this morning, and this afternoon we talked about the company’s customer concentration. Now I want to talk a bit about its ownership and stock valuation.

First, let’s talk about ownership. Having read through our leaked copy of the S-1 the past few hours, I can only summarize the situation as: wow, this is a really complicated ownership structure.

At the highest level, the founders of the company — Peter Thiel, Alex Karp, and Stephen Cohen — own 30.2% of the stock of the company as of the end of July of this year. Thiel controls much more than that though through his myriad investments made through Founders Fund, Mithril Capital, Clarium Capital, and quite literally dozens of other investment management funds listed in the filing.

In terms of overall corporate voting power today, Thiel has 28.4% at his disposal, Karp 8.9%, and Cohen 3.1% according to the company’s calculation.

This is where things get interesting. As is typical with most modern tech IPOs, the founders of the business are looking to create multiple voting classes of stock in order to protect their voting power even while their total ownership of the company diminishes. It is pretty common today to see a two-class structure where the plebian stock class for retail investors offers one vote, and a special class is offered to founders that has 10 votes. This allows a founder with 5% of the company through these special shares to control a majority of a company’s voting authority.

Palantir wants to push the envelope further though with a three-class structure that would prioritize Thiel, Karp, and Cohen above all others. In Palantir’s model, there would be a Class A share with 1 vote, a Class B share with 10 votes, and a special “Class F” share with variable votes.

Class F shares would share 49.999999% (six 9s in the decimal – I counted twice) of the voting power of Palantir at all times, regardless of the underlying ownership of shares. Important to note that that is not a “majority” and thus they will not have literally a controlling stake in the public company.

In fact, Palantir has spent much of the last few months building the case for why it needs this special tripartite system of corporate governance. It hired several new members to its board of directors including Alexandra Schiff, Spencer Rascoff, and Alexander Moore earlier this year in order to build a “Special Governance Committee” that would make these changes to the company’s Delaware charter. Given that the founders were practically the only directors of the company outside of Adam Ross, it was hard to give themselves control by their own vote.

Palantir’s leaked S-1 has dozens of pages of the timeline and discussions that resulted, and why the committee ended up deciding to go with what can only be described as Byzantine method of voting.

That resolution still has to be supported by shareholders and of course, Wall Street. Much in the way that Palantir is going to have a lockup on its employees in a novel variant of the direct listing model, it seems it wants to pioneer a new model of founder ownership as well.

Now, let’s switch over to a little chart showing Palantir’s preferred stock prices since inception and the current carrying value of those shares: 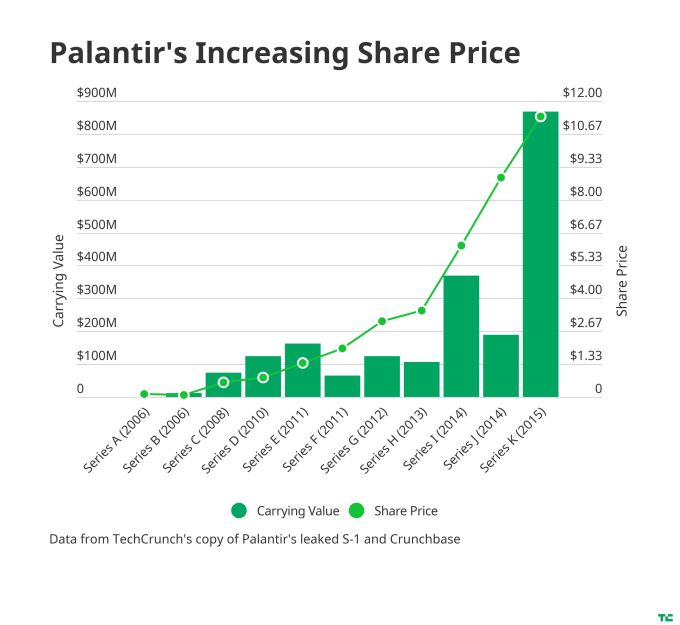 Immediately, we can see here that Palantir starting in 2013 really came into its own. The company, which was founded in 2003, showed little sign of deep outside investor interest for much of its early history. Its preferred stock share price grew linearly and slowly from its Series C in 2008 to its Series H in 2013.

Then, something interesting happens. There is almost immediately a radically increasing growth in the value of the stock with new issues in the Series H through K showing quick growth in value.

Recent stock sales have been common shares, and not preferred.