Welcome back to Human Capital, where we unpack the latest in diversity, equity and inclusion, and labor issues in the tech industry.

In this week’s edition, we’re looking at the latest in Uber and Lyft’s court battle to keep their drivers classified as independent contractors, Pinterest’s well-timed announcement of a Black board member, overall board diversity in tech and the Kapor Center for Social Impact’s action campaign to advance racial justice.

The Uber-Lyft versus people of California saga continued this week. The latest is that Uber and Lyft will not be shutting down their respective ride-hailing services today. That decision came following an appeals court judge’s decision to grant them a temporary stay on the preliminary injunction order that seeks to force them to immediately reclassify their drivers as employees.

There’s no saying when this will all be resolved, but here’s what happens next:

8/25: Uber and Lyft must file written statements by 5 p.m. PT agreeing to expedited procedures in the appeals process. If they agree, the stay will remain in place until the appeal is resolved.

9/4: Both Uber and Lyft must submit sworn statements with implementation plans for complying with the law within 30 days if the court upholds the trial court’s injunction order and if their California ballot measure that aims to keep drivers classified as independent contractors, Prop 22, doesn’t pass.

Meanwhile, as Uber and Lyft were threatening to shut down and awaiting a ruling from the judge, rideshare drivers held an action outside of Uber’s San Francisco headquarters. At the rally, San Francisco Supervisor Matt Haney showed his support for drivers.

This is an incredible speech from @MattHaneySF. Listen to all of it. He breaks down so clearly how the inequality we have in the US is crystal clear in the gig economy. #NoOnProp22 pic.twitter.com/2faHNjzZQn

100 days of action for racial justice

The folks over at the Kapor Center for Social Impact are urging people to take action for racial justice.

“The murders of Ahmaud Arbery, Breonna Taylor, George Floyd and Rayshard Brooks, the most recent in a long history of police brutality against Black men and women have inspired protests and uprisings in support of the Black Lives Matter movement,” they write. “In doing so, it has challenged America to confront the systemic racism that has been embedded in every institution, from education to policing to the economy, from its inception.”

As part of the organization’s 100 days of action for racial justice campaign, they’re urging people to participate across three areas: educational equity, civic engagement and economic justice. That last area, economic justice, is what is especially geared toward the tech industry. The campaign calls for tech leaders to deploy capital to Black and Indegenous people of color, renegotiate the terms of their employee resource groups, support paths into tech jobs and more.

Over the last few years, tech companies have done a better job than usual around diversity at the board level. Following Reddit co-founder Alexis Ohanian stepping down from its board of directors and urging the company to add a Black person to its board, Reddit appointed Y Combinator CEO Michael Seibel. Other companies that have added Black board members in recent years include Facebook, Airbnb, Slack, Twitter and Apple.

Here’s a quick scorecard of racial diversity at big tech companies. Below, you can see how these major tech companies all have at least one Black board member, but how Black people are still underrepresented on boards of directors. 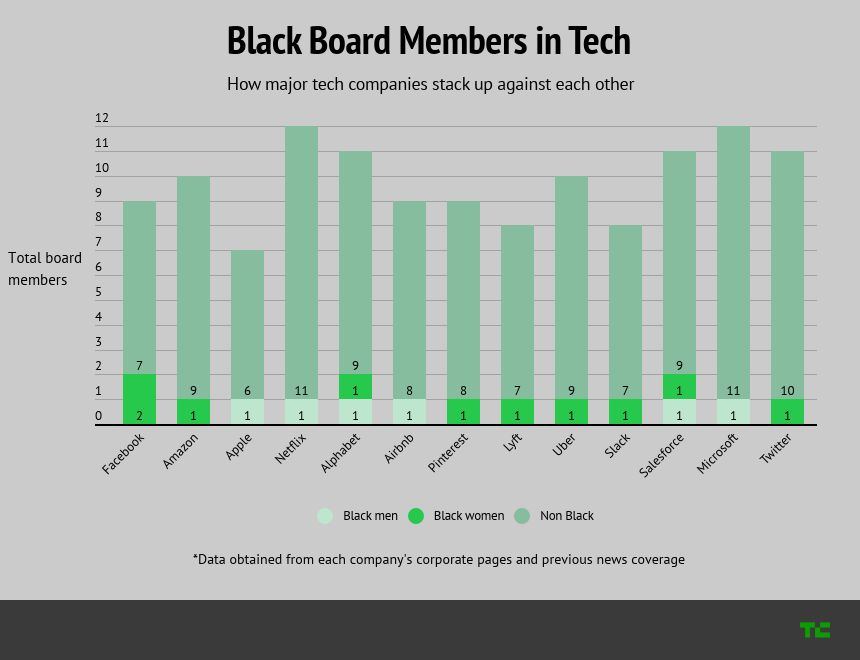