One of President Trump’s former top political advisors was arrested in connection with a crowdfunding scheme to build a U.S. border wall, according to charges unsealed by federal prosecutors Thursday. Steve Bannon is one of four individuals named in the indictment who now face charges for conspiracy to commit money laundering and conspiracy to commit wire fraud for their work on a campaign known as We Build the Wall. 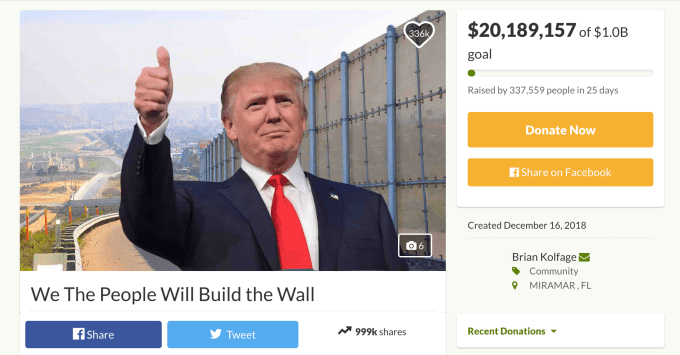 While those names don’t appear in the indictment, Bannon and Kolfage are now on the hook for what happened to the more than $25 million the campaign raised. The campaign’s website and team page remain online.

“As alleged, the defendants defrauded hundreds of thousands of donors, capitalizing on their interest in funding a border wall to raise millions of dollars, under the false pretense that all of that money would be spent on construction,” Acting U.S. Attorney for Southern District of New York Audrey Strauss said in a statement.

“While repeatedly assuring donors that Brian Kolfage, the founder and public face of We Build the Wall, would not be paid a cent, the defendants secretly schemed to pass hundreds of thousands of dollars to Kolfage, which he used to fund his lavish lifestyle.”

The indictment details how Bannon and the other men allegedly took in hundreds of thousands of dollars while representing the We Build the Wall campaign as a volunteer effort that in no way would benefit them. Kolfage made repeated claims that he would “not take a penny in salary or compensation.”

Bannon allegedly siphoned off more than a million dollars from the $25 million the scheme drummed up, using hundreds of thousands for personal use. Kolfage is accused of putting $350,000 from the campaign toward his own personal expenses. The men attempted to conceal their payouts through a nonprofit, shell companies and a series of falsified invoices and fake vendor relationships.

In a timely twist, the U.S. Attorney’s office named the United States Postal Inspection Service, the law enforcement arm of the USPS, as a key player in the investigation.

“We thank the USPIS for their partnership in investigating this case, and we remain dedicated to rooting out and prosecuting fraud wherever we find it,” Strauss said.