Observing the microscopic creatures that fill our oceans is important work, but keeping your eye on one in the wild is practically impossible — and doing so in a dish isn’t the same. This “hydrodynamic treadmill” however provides the best of both worlds: An unending water column for the creatures to swim in, without ever leaving the watchful eye of an automated microscope.

The Gravity Machine, as it’s called, is the brainchild of Stanford researchers under bioengineering professor Manu Prakash. He and some students, during a research trip to Madagascar, had built a slightly clunky meter-long tube with an attached microscope that could follow a creature as it moved up and down. But these microorganisms sometimes travel hundreds of meters a day to chase the sun or nutrients in the water.

“We haven’t had the opportunity to observe this life in its own habitat … the last 200 years, we’ve been doing microscopy with confinement. You’d have to have a kilometer-long tube if you wanted to track an organism over a kilometer,” Prakash said. “While we were thinking about this problem, it dawned on us — there was this ‘aha!’ moment where we thought, instead of a long tube, what if the two ends of the tube were connected?” 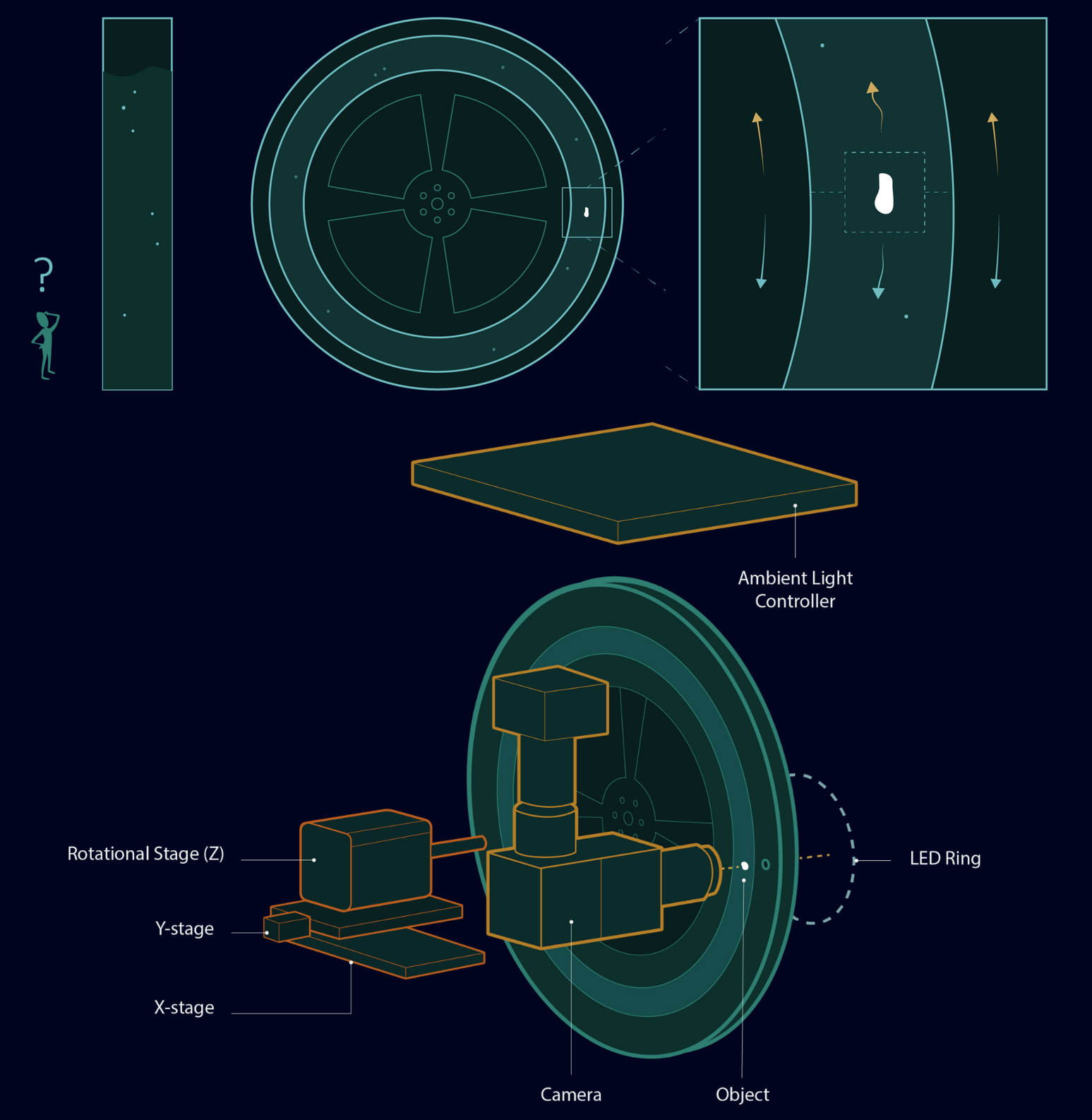 The gadget is, in retrospect, almost obvious. Instead of having a microscope pointing downward at a dish where the creatures swim around in a shallow pool of water — nothing like their natural environment — you have one pointed sideways at a closed glass loop filled with water and the organisms of interest. They can swim freely up and down, and as they do so the loop slowly spins to keep them within the frame of the microscope.

A computer vision system attached to the 3D microscope carefully tracks the location of the target creature and keeps it in focus, while auxiliary systems note the exact distances traveled and other metrics.

The team has used the device to capture all manner of beautiful and scientifically interesting behaviors by microscopic organisms.

“It’s fair to say that every time we have put an organism into this instrument, we have discovered something new,” Prakash said.

One such novelty is the fact — obvious upon inspecting these creatures in this way — that despite living in a fluid environment and at a scale of microns, gravity is a major factor in their lives. “They’re all aware of gravity, and they all care about gravity,” said Prakash. Exactly how would be very difficult to say until the creation of this machine, which lets the scientists observe these behaviors directly — hence the name.

The imagery produced by the instrument is visually arresting and interesting even to a layperson, as well — and capturing the interest of the general public is remarkably difficult to do when it comes to the field of marine microbiology. People’s eyes tend to glaze over when you talk about the diurnal migratory habits of dinoflagellates, but seeing one of these beautiful creatures up close and in focus, doing what it does best (whatever that is), is simply fascinating.

While the water stays in the loop (ideally — “we do explode wheels in our lab,” noted Prakash) that doesn’t mean that it’s a totally closed system.

“We can introduce things based on what the creature is doing,” said grad student Deepak Krishnamurthy. “We can introduce nutrients, tie the light intensity to it —  it’s a feedback loop between the organism and its environment. We’re also working on doing that with pressure, temperature and other aspects of the ocean.”

I couldn’t shake the idea that I’d seen something like this before, and well into development of the Gravity Machine, Prakash himself came across a similar idea from the ’50s, a much larger loop that a marine biologist named Hardy used to allow jellies to swim endlessly in a similar fashion. Of course the present device could only happen with the advance machine learning and robotics tech that we have today, but as Prakash said, “the historic context is quite beautiful, actually. We got a big kick out of that in the lab.”

Stanford’s Gravity Machine wasn’t quite the first, then, and the team means to make sure it isn’t the last, either, by publishing all the details on how to build and run the instrument.

“We were careful to make it as open as possible, and that affected our choices of hardware and software,” said Krishnamurthy. “The intention is for it to be completely open-source for research purposes. We use open-source algorithms for tracking, we wrote our own for the controls that keep it in focus, the UI for watching and collecting data.”

“We’ll be putting instructions for people to build this on the gravitymachine.org site itself,” added Prakash. An ordinary microscope can be used with some modification and a few easy-to-get parts, and ultimately it’s no more than a lab might do to create or customize its own equipment anyway. He even hinted at a “home edition” that could show a curious user what critters in the endless water column were up to. Sort of like having your sea monkeys live on TV.

The exact specifications of the Gravity Machine will be published soon, as will the team’s first paper using the device to discover something new and extremely weird: diatoms that can voluntarily control their own density to rise or fall in the water column. You can read more about the device at its site or this Stanford news post.