Movable Ink, a company that helps businesses deliver more personalized and relevant email marketing, is announcing that it has raised $30 million in Series C funding.

The company will be 10 years old in October, and founder and CEO Vivek Sharma told me that it’s always been “capital efficient” — even with the new round, Movable Ink has only raised a total of $39 million.

However, Sharma noted that with COVID-19, it felt like “a good idea to have some dry powder on our balance sheet … if things turned south.”

At the same time, he suggested that the pandemic’s impact has been more limited than he anticipated, and has been “really focused” on a few sectors like travel, hospitality and “old line retailers.”

The company’s senior vice president of strategy Alison Lindland added that clients using Movable Ink were able to move much more quickly, with campaigns that would normally take months launching in just a few days.

“We really saw those huge, wholesale digital transformations in a time of duress,” Lindland said. “Obviously, large Fortune 500 companies were making difficult decisions, were putting vendors on hold, but email marketers are always the last people furloughed themselves, because of how critical email marketing is to their businesses. We were just as critical to their operations.” 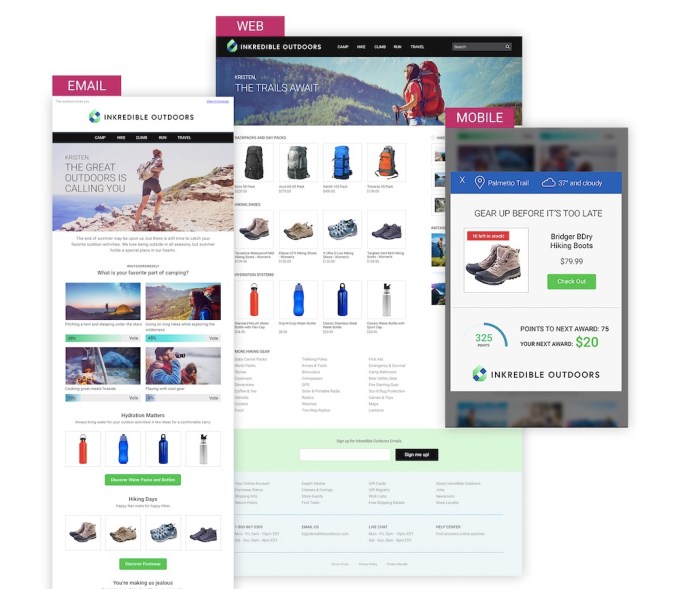 The company said it now works with more than 700 brands, and in the run up to the 2020 election, its customers include the Democratic National Committee.

On the platform side, that means continuing to develop Movable Ink’s technology and expanding into new channels. He estimated that around 95% of Movable Ink’s revenue comes from email marketing, but he sees a big opportunity to grow the web and mobile side of the business.

“We take any data the brand has available to it and activate and translate it into really engaging creative,” he said, arguing that this approach is applicable in “every other channel where there’s pixels in front of the consumer’s eyes.”

The company also plans to make major investments into AI. Sharma said it’s too early to share details about those plans, but he pointed to the recent hire of Ashutosh Malaviya as the company’s vice president of artificial intelligence.

As for partners, the company has launched the Movable Ink Exchange, a marketplace for integrations with data partners like Oracle Commerce Cloud, MessageGears Engage, Trustpilot and Yotpo.

And Movable Ink plans to expand its team, both through hiring and potential acquisitions. To that end, it has hired Katy Huber as its senior vice president of people.

Sharma also said that in light of the recent conversations about racial justice and diversity, the company has been looking at its own hiring practices and putting more formal measures in place to track its progress.

“We use OKRs to track other areas of the business, so if we don’t incorporate [diversity] into our business objectives, we’re only paying lip service,” he said. “For us, it was really important to not just have a big spike of interest, and instead save some of that energy so that it’s sustained into the future.”