Google Maps is getting a significant update that will bring more detail and granularity to its map, with changes that encompass both natural features and city-level details alike. For the former, Google says it’s leveraged computer vision techniques to analyze natural features from satellite imagery, then color-coded those features for easier visual reference. Meanwhile, select cities (including New York, San Francisco and London) will gain more detailed street information, like the location of sidewalks, crosswalks and pedestrian islands, for example.

These additions will help people better navigate their cities on foot or via alternative modes of solo transportation, like bikes and scooters, which some have opted for amid the pandemic. The supported cities will also show the accurate shape and width of a road to scale to offer a better sense of how wide or narrow a street is, in relation to its surroundings. 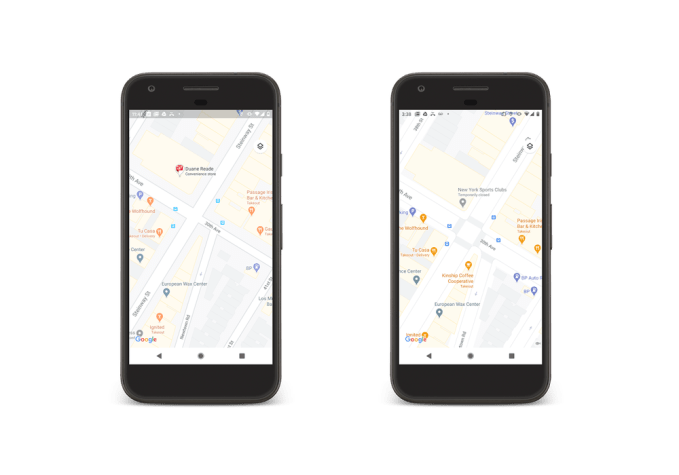 While the added granularity won’t include more accessibility features, like curb cuts for example, Google says that having the crosswalks detailed on the map will help in that area. The company also notes that Google Maps today displays wheelchair-accessible routes in transit and wheelchair attributes on business pages.

The updated city maps won’t show up immediately in the Google Maps app, we understand. Instead, Google says the new maps will roll out to NY, SF and London in the “coming months.” The vague time frame is due to the staged nature of the release — something that’s often necessary for larger apps. Google Maps reaches over a billion users worldwide, so changes can take time to scale.

The company notes that after the first three cities receive the update, it plans to roll out more detailed city maps to additional markets, including those outside the U.S.

Meanwhile, users both inside and outside big cities around the world will benefit from the changes to how natural features are presented in Google Maps.

Google utilized a color-mapping technique to identify natural features from its satellite imagery, looking specifically at arid, icy, forested and mountainous regions. These features were then assigned a range of colors on the HSV color model. For instance, a dense forest will now appear as a dark green while patchier shrubs may appear as a lighter green. You’ll be able to differentiate between beaches and greenery, see where deserts begin and end, see how much land is covered by ice caps, see where snowcapped mountain peaks appear or view national park borders more easily, among other things.

These changes will reach all 220 countries and territories that Google Maps supports — over 100 million square kilometers of land, from bigger metros to rural areas and small towns.

The update comes at a time when Google’s lead as everyone’s default mapping app is being challenged on iOS and Mac. While Apple Maps started out rough, a 2018 redesign and subsequent updates have made it a more worthy rival. Apple even took on Google’s Street View with its higher-resolution 3D feature, Look Around, which particularly targets big city users. More recently, Apple introduced a clever trick that allows you to raise your phone and scan the skyline to refine your location. And Apple is battling Google Maps’ explore and discovery features through its expanded, curated guides built with the help of partners. These updates have pushed Google to race ahead with improvements of its own in order to maintain its lead in maps.

Google says the new features and updates will roll out across Android, iOS and desktop in the months ahead.