GM unveiled Thursday the Cadillac Lyriq, an all-electric crossover dripping in luxury and tech-forward touches. Promising more than 300 miles of range, it aims to propel the brand into a new electrified era.

That new era for Cadillac will have to wait though. The company said the Lyriq will go into production in the U.S. in late 2022, more than two years after its reveal date. The Cadillac Lyriq will be a global product, meaning it will be headed to China as well. Production in China will begin ahead of the U.S., according to Cadillac.

The Lyriq is just one in a roster of 20 electric vehicles that GM plans to bring to market by 2023. But it will be a critical one for the Cadillac brand. “The Lyriq sets the benchmark for future Cadillacs,” Michael Simcoe, GM’s vice president of global design, said during the reveal.

The Lyriq embodies the kinds of luxury touches a Cadillac customer has come to expect, from the “black crystal” grille and jewelry box-styled drawer to the 33-inch vertical LED touchscreen display and AKG sound system.

Cadillac aimed for a modern and aggressive design that it achieved by giving the Lyriq a low, fast roofline and wide stance. That “black crystal” grille is a dynamic feature with “choreographed” LED lighting that greets the owner as they approach the vehicle. The LED lighting continues in the rear with a split taillamp design.

Inside the vehicle are backlit speaker grilles, curved screens with hidden storage and orchestrated lighting features similar to the dynamic lighting outside.

The Lyriq will be available in rear-wheel drive and performance all-wheel drive configurations. The 100 kilowatt-hour battery pack will provide more than 300 miles of range, according to the company’s internal testing. It will come with DC fast charging rates over 150 kilowatts and Level 2 charging rates up to 19 kW. 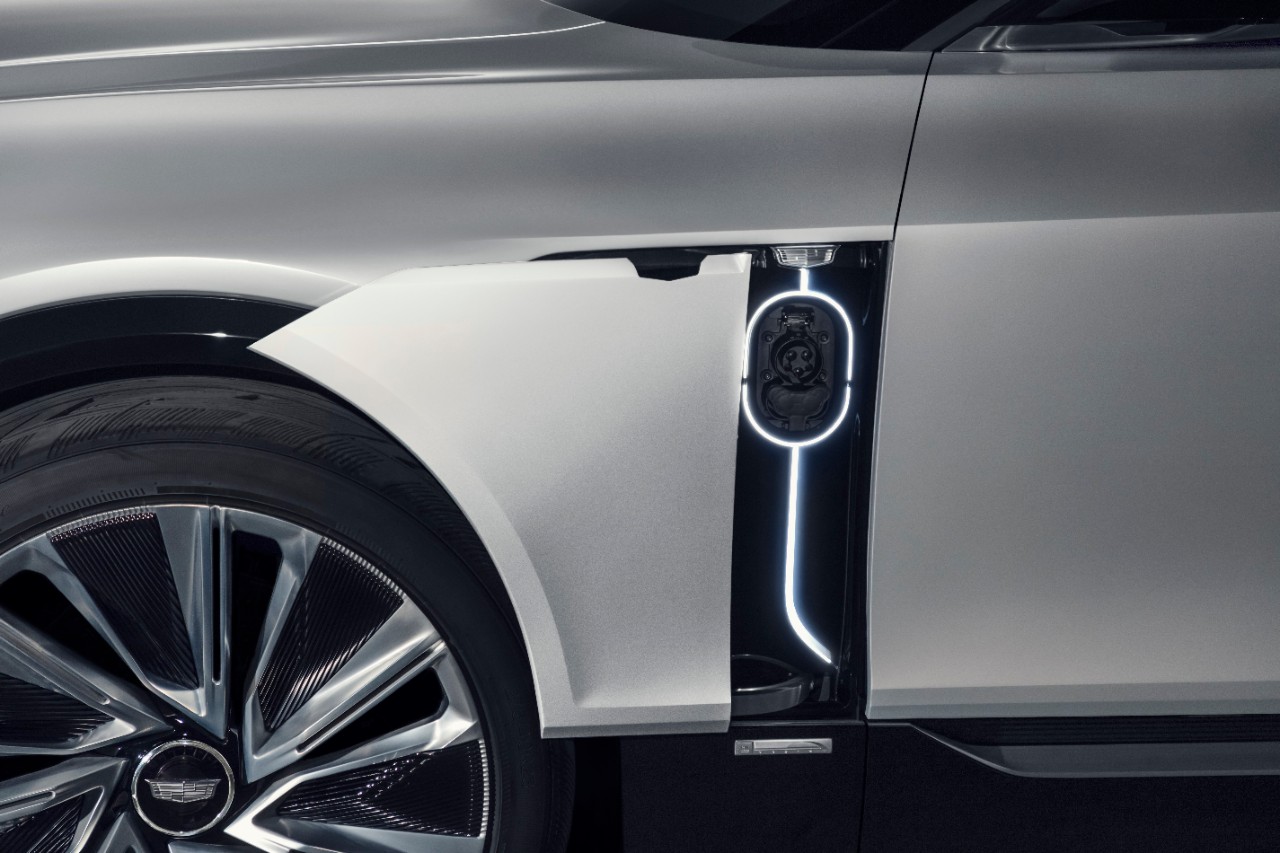 The tech inside the Lyriq includes the latest version of the hands-free driver assistance system called Super Cruise that first debuted in the Cadillac CT6 several years ago. Super Cruise uses a combination of lidar map data, high-precision GPS, cameras and radar sensors, as well as a driver attention system, which monitors the person behind the wheel to ensure they’re paying attention. Unlike Tesla’s Autopilot driver assistance system, users of Super Cruise do not need to have their hands on the wheel. However, their eyes must remain directed straight ahead.

The Lyriq will also come with a dual-plane augmented reality-enhanced head-up display. The head up display, which is projected on the windshield in the sight line of the driver, shows a near plane indicating speed and direction and a far plane that displays navigation signals and other important alerts. The effect is a layered look.

A vehicle has to be compelling visually to attract buyers. But the underlying foundation of the Lyriq is where GM has placed its biggest bet. Earlier this year, the automaker revealed a sweeping plan to produce and sell EVs that hinges on a new scalable electric architecture called Ultium that will support a wide range of products across all of its brands, including Buick, Cadillac, Chevrolet and GMC. The EV portfolio will include everything from compact cars and work trucks to large premium SUVs and performance vehicles.

The Ultium battery has a nickel-cobalt-manganese-aluminum chemistry that uses aluminum in the cathode to help reduce the need for rare-earth materials such as cobalt, according to GM. The company said it has been able to reduce the cobalt content by more than 70% compared to current GM batteries.

GM recently started construction on a 3-million-square-foot factory that will mass-produce Ultium battery cells and packs. The Ultium Cells LLC battery cell manufacturing facility in Lordstown, Ohio is part of a joint venture between GM and LG Chem that was announced in December. At the time, the two companies committed to invest up to $2.3 billion into the new joint venture, as well as establish a battery cell assembly plant on a greenfield manufacturing site in the Lordstown area of Northeast Ohio that will create more than 1,100 new jobs. The factory will be able produce 30 gigawatts hours of capacity annually.