Loren Appin Contributor
Loren Appin is co-founder and COO of Fishbowl, a workplace social network bringing together professionals during the new era of remote work.

The death of George Floyd and the recent Black Lives Matter protests have drawn widespread attention to the systemic racism within the United States. Millions of individuals across every state have come together to demand change.

Yet, whether companies believe they have a responsibility to respond to, resist and address this racism remains unclear. Do customers expect, or desire, a response? Do the companies’ own employees expect a response? Corporate America has the ability to use its influence for the change many of their employees are demanding; however, historically companies have been wary of inserting themselves into the middle of any conflict.

Now more than ever, it’s important for employers to align themselves with their employees’ expectations, though. Since March 2020 professionals working remotely increased from 30% to 80%, drastically accelerating an already rapidly growing trend. This remote nature has made it increasingly difficult to maintain a strong sense of “corporate community” and trust between leaders and employees.

At Fishbowl, we have been able to observe employees’ sentiments and expectations of their employers during this time.

Fishbowl is a new workplace social network that brings professionals together in a new era of remote work. Fishbowl provides thousands of industry and community-related bowls (aka groups) that allow verified professionals to have more honest and intimate conversations with other people working in roles and industries similar to their own.

Over the past several weeks, we saw a large increase in conversations about employers’ roles in addressing systemic racism and support for the Black Lives Matter cause. Our team decided to quantify the insights from these conversations, and polled employees on whether they expect their companies to speak out. We found that the majority of employees expect a public statement, but it varies significantly by industry.

In order to determine how many employees expect their companies to release a statement on recent events, we asked professionals one question:

“Do you expect your company to publicly speak up for the Black Lives Matter cause?”

Professionals could answer with one of two options: (A) Yes or (B) No. The survey ran from June 5 through June 7, 2020 and received responses from over 16,812 verified professionals on the Fishbowl app from across the United States. Respondents included employees at companies such as IBM, JP Morgan, Facebook, McKinsey, Deloitte, Bank of America, Amazon, Edelman, Nike, Google, KPMG and thousands of others.

Here’s what our survey revealed: 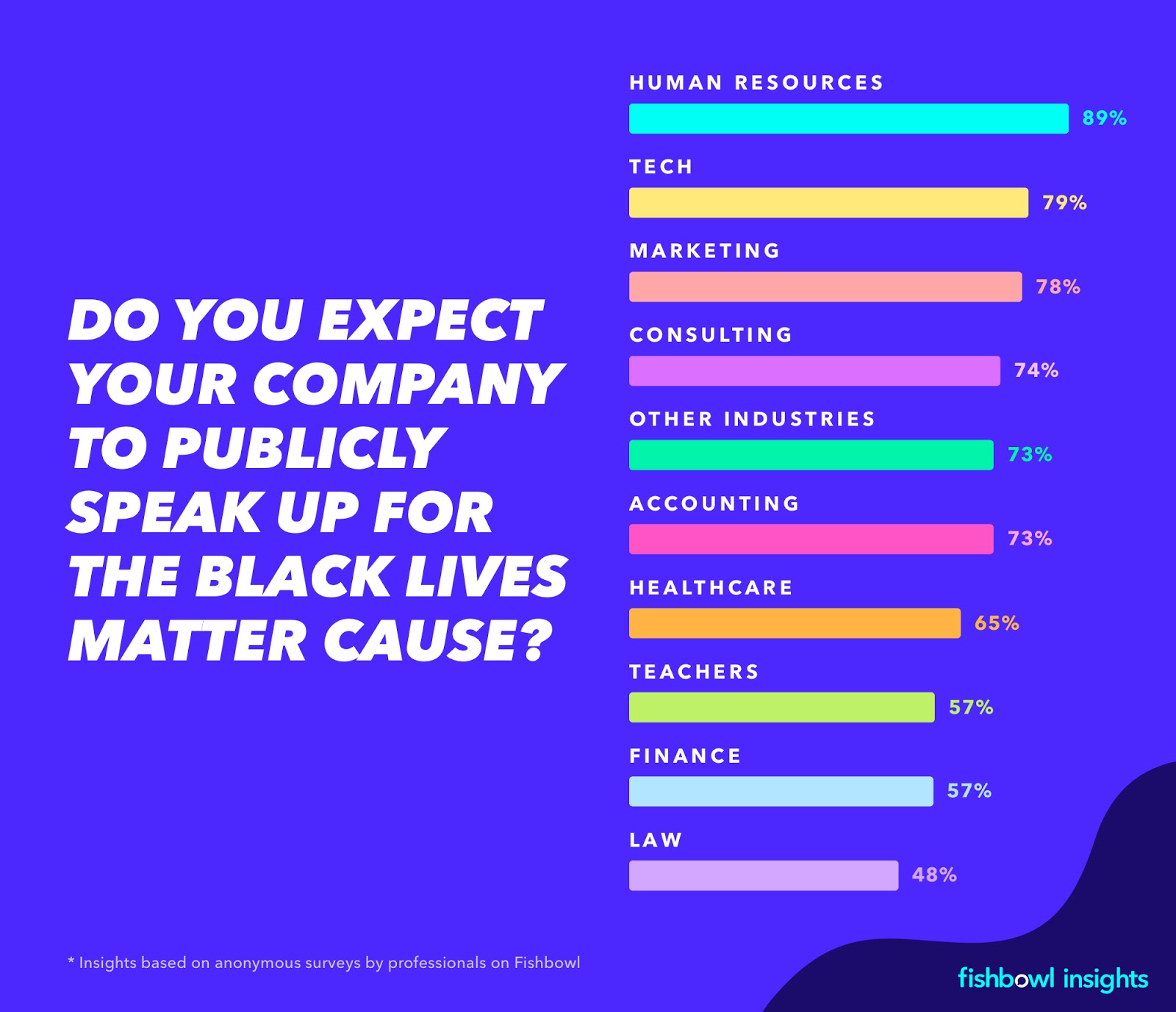 By gender:  76.77% of women and 62.75% of men answered that they expect their company to speak up for the Black Lives Matter movement.

As noted above, the response varied greatly by industry, with tech standing out toward the top, with 79% of employees expecting public statements from their employer.

Big tech companies and their CEOs command more attention from the media than any other industry. With that attention comes certain expectations and pressure to respond to important causes like BLM from the public and their own employees.

So, when these companies speak out (or don’t), the public takes note. Social networking platforms in particular rely on how the public perceives them for business. Not making a statement could lead to a loss of business for some of these companies. For example, Facebook’s inaction on posts by Trump about the protests led to user and employee backlash last week.

Companies within other industries, on the other hand, such as law firms, are not household names, nor have the same level of scrutiny from the public eye. If anything, law firms and the individuals working there are asked to represent both sides of any argument, supporting the survey results showing less than half of attorneys expected public statements from their employers.

What companies say (and don’t say) in coming weeks will greatly impact the relationship and trust with their employees. Now that tech giants like Apple, Google, Amazon and even TikTok, have made statements supporting the Black Lives Matter cause, the focus will shift from public statements to action and accountability.

As a recent Washington Post article on diversity in tech reveals, the words from these institutions might not always be representative of their actions. Employees of these companies are now rightfully asking their employers to turn their commitment to the cause into action by looking internally, and to start making the corporate environment more equitable for Black professionals.