Twitter has confirmed it has permanently banned the account of David Duke, former leader of white supremacist hate group the Ku Klux Klan.

Duke had operated freely on its platform for years — amassing a following of around 53,000 and recently tweeting his support for president Trump to be re-elected. Now his @DrDavidDuke account page leads to an ‘account suspension’ notification (screengrabbed below). 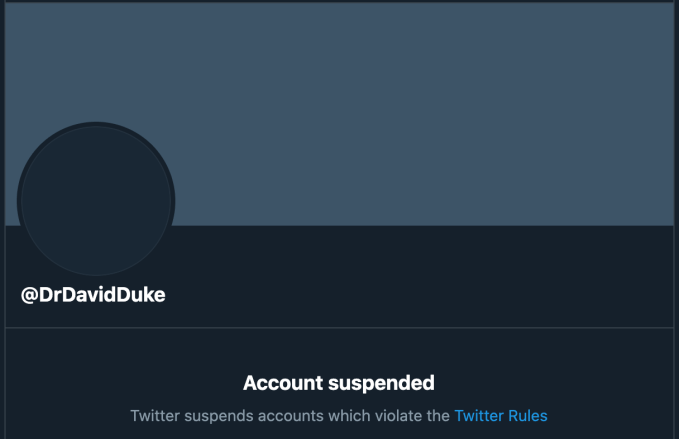 A Twitter spokesperson confirmed to TechCrunch that the ban on Duke is permanent, emailing us this brief statement:

The account you referenced has been permanently suspended for repeated violations of the Twitter Rules on hateful conduct. This enforcement action is in line with our recently-updated guidance on harmful links.

While the move has been welcomed by anti-Nazis everywhere, no one is rejoicing at how long it took Twitter to kick the KKK figurehead. The company has long claimed a policy prohibiting hateful conduct on its platform, while simultaneously carrying on a multi-year journey toward actually enforcing its own rules.

Over the years, Twitter’s notorious passivity in acting on policy-defined “acceptable behavior” limits allowed abuse and toxic hate speech to build and bloom essentially unchecked — eventually forcing the company to commit to cleaning up its act to try to stop users from fleeing in horror. (Not a great definition of leadership by anyone’s standards, as we pointed out back in 2017.)

Roll on a few more years and Twitter has been slowly shifting up its enforcement gears, with a push in 2018 toward what CEO Jack Dorsey dubbed “conversational health,” and further expansions to its hateful conduct policy. Enforcement has still been patchy and/or chequered, but appears to have stepped up markedly this year — which kicked off with a ban on a notorious U.K. right-wing hate preacher.

Twitter’s 2020 enforcement mojo may have a fair bit to do with the pandemic. In March, with concern spiking over COVID-19 misinformation spreading online, Twitter tweaked its rules to zero in on harmful link spreading (aka “malicious URLs” as it calls them), as a step to combat coronavirus scammers.

So it looks like public health risks have finally helped concentrate minds at Twitter HQ around enforcement — and everyone (still) on its platform is better for it.

In recent weeks Twitter has cracked down on the right-wing conspiracy theory group, Qanon, banning 7,000 accounts earlier this month. It also finally found a way to respond to U.S. President Trump’s abuse of its platform as a conduit for broadcasting violent threats and trying to stir up a race war (and spread political disinformation) by applying screens and fact-check labels to offending Trump tweets.

The president’s son, Donald Trump Jr, has also had temporary restrictions applied to his account this month after he shared a video which makes false and potentially life-threatening claims about the coronavirus pandemic.

That looks like a deliberate warning shot across Trump’s bows — to say that while Twitter might not be willing to ban the president himself (given his public office), it sure as hell will kick his son into touch if he steps over the line.

Twitter’s policy on link-blocking states the company may take action to limit the spread of links which relate to a number of content categories, including terrorism, violence and hateful conduct, in addition to those pointing to other bad stuff such as malware and spam. The policy further notes: “Accounts dedicated to sharing content which we block, or which attempt to circumvent a block on the sharing a link, may be subject to additional enforcement action, including suspension.”

Twitter previously said Duke hadn’t been banned because he’d left the KKK, per The Washington Times. So it looks as if he got the banhammer for essentially being a malicious URL node in slithering human form, by using his account to spread links to content that preached his gospel of hate.

Which makes for a nice silver lining on the pandemic storm cloud.

Much like similar right-wing hate spreaders, Duke also used his Twitter account to bully and harass critics — by being able to direct a Nazi troll army of Twitter supporters to target individuals with abuse and try to get their accounts suspended via tricking Twitter’s systems through mass reporting their tweets.

Safe to say, Duke, like all Nazis, won’t be missed.

Also doubtless concentrating minds at Twitter on standing up for its own community standards is the #StopHateForProfit ad boycott that’s been taking place this month, with multiple high-profile advertisers withdrawing spend across major social media platforms as an objection to their failure to boot out hate speech.

A quick reminder that Twitter deserves no kudos for this.

They, like all social media companies, have been bending and making up rules to keep white supremacists on their platforms for years just to grab more engagement to show advertisers & Wall Street.https://t.co/L74XyhOMWS https://t.co/MoLwTRalPG