Things haven’t exactly been smooth sailing for Huawei in recent years. The company’s rapid trajectory has been disrupted by on-going battles with the U.S. government that have, among other things, blocked its access to Google apps and services. But a new report from Canalys paints a reasonably rosy picture as the hardware giant overtook Samsung to snag the top spot in global smartphone shipments for the second quarter of 2020.

The news is a milestone for a number of reasons, not the least of which is the fact that this is first time in nine years that neither Apple nor Samsung has been at the top of Canalys’ charts. Huawei’s figures were almost exclusively boosted by sales in its native China, which currently comprises more than 70% of its total figure. 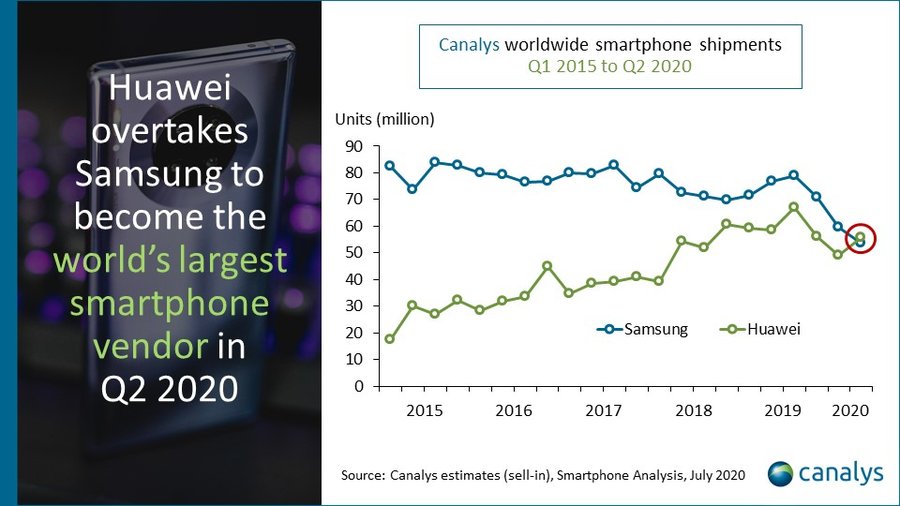 It’s important to note here, however, the fact that the company took the top spot by essentially shrinking at a less rapid rate than Samsung. Huawei’s overall figures are down 5% year-over-year. But that figure pales in comparison to Samsung’s 30% drop. The two Goliaths are currently at 55.8 million and 53.7 million, respectively.

Things were bad for the smartphone industry prior to COVID-19, but the pandemic certainly hasn’t helped overall, as people are less inclined toward shelling out hundreds to north of $1,000 for inessential upgrades. And, indeed, Huawei’s numbers dropped by 27% outside of China, but the overall slide was dampened by an 8% growth in China. Samsung, meanwhile, currently controls less than 1% of the Chinese market.

As for what this all means for the future, it seems that it may be difficult for Huawei to maintain its top spot. “Its major channel partners in key regions, such as Europe, are increasingly wary of ranging Huawei devices, taking on fewer models, and bringing in new brands to reduce risk” Canalys’ Mo Jia said of the report. “Strength in China alone will not be enough to sustain Huawei at the top once the global economy starts to recover.”