Lightricks, the startup behind a suite of photo and video editing apps — including most notably, selfie editor Facetune 2 — is taking its retouching capabilities to video. Today, the company is launching Facetune Video, a selfie video editing app, that allows users to retouch and edit their selfie and portrait videos using a set of A.I.-powered tools.

While there are other selfie video editors on the market, most today are generally focused on edits involving filters and presets, virtually adding makeup, or using AR or stickers to decorate your video in some way. Facetune Video, meanwhile, is focused on creating a photorealistic video by offering a set of features similar to those found in Lightricks’ flagship app, Facetune.

That means users are able to retouch their face with tools for skin smoothing, teeth whitening, and face reshaping, plus eye color, makeup, conceal, glow, and matte features. In addition, users can tweak tools for general video edits, like adjusting the brightness, contrast, color, and more, like other video editing apps allow for. And these edits can be applied in real-time to see how they look as the video plays, instead of after the fact.

In addition, users can apply the effect to one frame only and Facetune Video’s post-processing technology and neural networks will simultaneously apply an effect to the same area of every frame throughout the entire video, making it easier to quickly retouch a problem area without having to go frame-by-frame to do so.

“In Facetune Video, the 3D face model plays a significant role; users edit only one video frame, but it’s on us, behind-the-scenes, to automatically project the location of their edits to 2D face mesh coordinates derived from the 3D face model, and then apply them consistently on all other frames in the video,” explains Lightricks co-founder and CEO Zeev Farbman. “A Lightricks app needs to be not only powerful, but fun to use, so it’s critical to us that this all happens quickly and seamlessly,” he says.

Users can also save their favorite editing functions as “presets” allowing them to quickly apply their preferred settings to any video automatically.

In a future version of the app, the company plans to introduce a “heal” function which, like Facetune, will allow users to easily remove blemishes.

The technology that makes these selfie video edits work involves Lightricks’ deep neural networks that utilize facial feature detection and geometry analysis for the app’s retouching capabilities. These processes work in real-time without having to transmit data to the cloud first. There’s also no lag or delay while files are rendering.

In addition, Facetune Video uses the facial feature detection along with 3D face modeling A.I. to ensure that every part of the user’s face is captured for editing and retouching, the company says.

“What we’re also doing is taking advantage of lightweight neural networks. Before the user has even begun to retouch their selfie video, A.I.-powered algorithms are already working so that the user experience is quick and interactive,” says Farbman.

The app also does automated segmentation of more complex parts of the face like the interior of the eye, hair, or the lips, which helps it achieve a more accurate end result.

“It’s finding a balance between accuracy in the strength of the face modeling we use, and speed,” Farbman adds.

One challenge here was overcoming the issue of jittering effects, which is when the applied effect shakes as the video plays. The company didn’t want its resulting videos to have this problem, which makes the end result look gimmicky, so it worked to eliminate any shake-like effects and other face tracking issues so videos would look more polished and professional in the end.

The app builds off the company’s existing success and brand recognition with Facetune. With the new app, for example, the retouch algorithms mimic the original Facetune 2 experience, so users familiar with Facetune 2 will be able to quickly get the hang of the retouch tools. 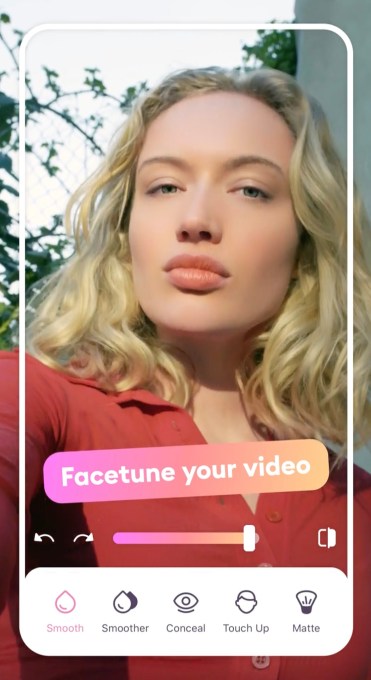 The launch of the new app expands Lightricks further in the direction of video, which has become a more popular way of expressing yourself across social media, thanks to the growing use of apps like TikTok and features like Instagram Stories, for example.

Before, Lightricks’ flagship video product, however, was Videoleap, which focused on more traditional video editing, and not selfie videos where face retouching could be used.

Facetune has become so widely used, its name has become a verb — as in, “she facetunes her photos.” But it has also been criticized at times for its unrealistic results. (Of course, that’s more on the app’s users sliding the smoothing bar all the way to end.)

Across its suite of apps, which includes the original Facetune app (Facetune Classic), Facetune 2, Seen (for Stories), Photofox, Video Leap, Enlight Quickshot, Pixaloop, Boosted, and others, including a newly launched artistic editor, Quickart, the company has generated over 350 million downloads.

Its Facetune and Facetune2 apps also now reach nearly 200 million users worldwide. And through its subscription model, Lightricks is now seeing what Farbman describes as revenues that are “increasing exponentially year-over-year,” but that are being continually reinvested into new products.

Like its other apps, Facetune Video will monetize by way of subscriptions. The app is free to use by will offer a VIP subscription for more features, at a price point of $8 per month, $36 per year, or a one-time purchase of $70.

Facetune 2 subscribers will get a discount on annual subscriptions, as well. The company will also sell the app in its Social Media Kit bundle on the App Store, which includes Facetune Video, Facetune 2, Seen and soon, an undisclosed fourth app. However, the company isn’t yet offering a single subscription that provides access to all bundled apps.