WhatsApp plans to offer credit, insurance and pension products to lower-income individuals and those in rural areas in India and help digitize local small and medium-sized businesses as the Facebook service looks to make a digital payments push in its biggest market by users.

The instant messaging app maker has been working with banks — including ICICI, Kotak Mahindra and HDFC — in India for the past year to explore ways to bring financial services to individuals who have yet to become part of the banking population, said Abhijit Bose, WhatsApp’s head in India, at Global Fintech Fest conference, via video chat on Wednesday.

This work over the past year has already proven that banks can leverage WhatsApp’s reach; ICICI Bank and Kotak Mahindra have reached more than 3 million new users, said Bose, who announced that the app is now planning to work with additional partners to bring insurance, micro-pension and credit to lower-wage workers and the informal economy over the next year-and-a-half.

WhatsApp will pilot several programs with partners to test solutions to bring these services to people, he said.

“Based on the results, we will co-invest and scale. Even a small conversion of the demand will translate into an infusion of significant savings into the financial system,” he said. “Over the next two years, we are committing to opening in entrepreneurial ways we never have before. We will launch many experiments.”

Banks today face a number of roadblocks, such as the level of presence they have in a small city or town and their heavy reliance on middlemen to sell financial services that have limited the number of people they can reach, said Bose.

With a reach of over 400 million users in India — more than any other app in the country — WhatsApp is uniquely positioned to bring more people into the financial ecosystem. 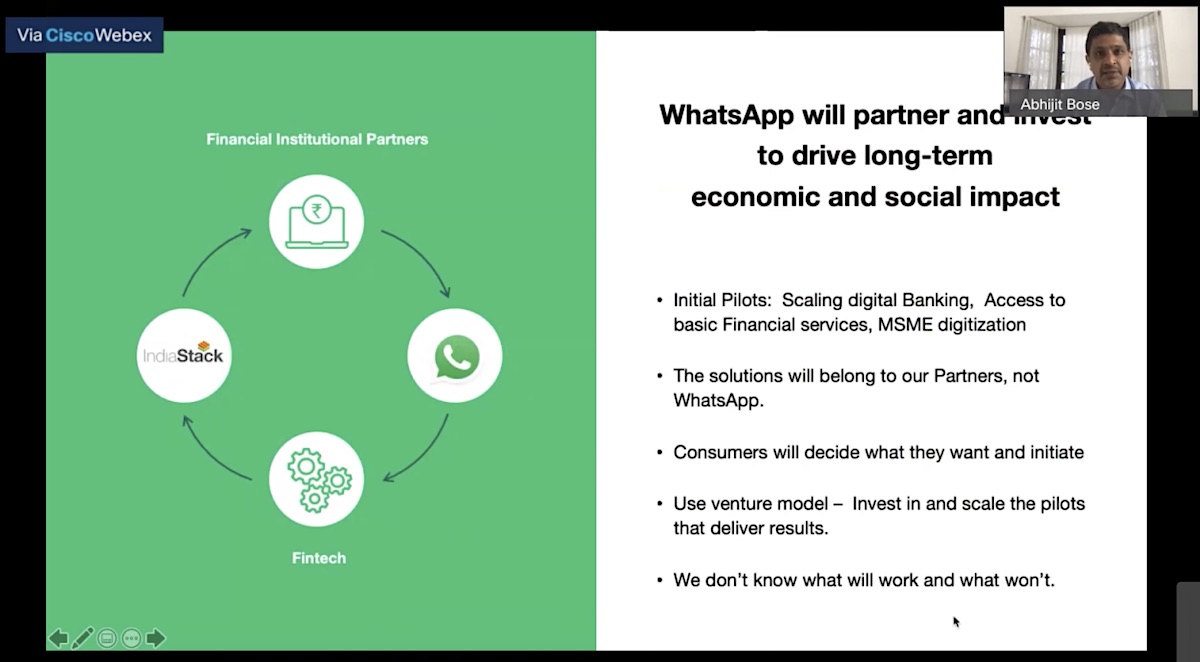 Facebook made clear its plan to enter India’s digital payments market in 2018 when it launched WhatsApp Pay to a small number of users in the country. But it has been stuck in a regulatory maze since then that has prevented it from rolling out WhatsApp Pay to all its users.

The company says it has complied with all the requirements mandated by New Delhi’s central bank, signaling that it could receive the final approval for a wide rollout of WhatsApp Pay any day now.

“These small businesses are critical to the Indian economy. If you look at Facebook as a company, there has always been a focus on helping these businesses,” Facebook India head Ajit Mohan told TechCrunch in an interview earlier this year. “These small businesses, first-time entrepreneurs and new ventures leverage the Facebook platform to find new customers and expand to additional markets.”

Bose said Wednesday that he is hopeful some of its financial services bets will work in India, and that it will be able to replicate those models in other markets.

One platform from India that Facebook wishes to help bring to other markets is UPI, a payments infrastructure built by a coalition of banks in the country and backed by the local government, said Bose.

UPI has amassed over 100 million users on its platform in fewer than four years, and the infrastructure — which allows users to exchange money with one another across any bank in India as easy and fast as sending a text message — is being used to facilitate more than 1.3 billion transactions a month.

At stake is India’s mobile payments market that Credit Suisse estimates could reach $1 trillion by 2023. Dozens of heavily backed local startups and international giants are competing to claim a slice of this opportunity. Google Pay and Walmart’s PhonePe currently dominate the market, TechCrunch reported last month.