Twitter is still recovering from the fallout of yesterday’s sizable attack on high-profile accounts, but it’s continuing to move forward with its plans to roll out a new version of its developer API. Today, the company is announcing its new Twitter API v2, rebuilt from the ground up. The new foundation, which has been rebuilt for the first time since 2012, includes features that were missing from the earlier API, like conversation threading, poll results in tweets, pinned tweets, spam filtering and more powerful stream filtering and search query language. It has also been designed in a way that will allow Twitter to release new functionality faster than in years past, the company claims.

Though Twitter says it has no evidence that yesterday’s security incident had anything to do with its API, actually turning it on today, as was planned, had to take a backseat to its focus on making sure Twitter and its accounts are safe and secure. The company plans to now roll out API v2 and other content, like its new support center, documentation and other blog posts with details sometime next week.

Today, Twitter’s API is separated into three platforms: Standard (free), Premium (self-serve paid) and Enterprise. But this has made it difficult for developers to migrate from one tier to another. The new API will eventually — and fully — replace all three, and will instead serve all users across three different product tracks, designed to accommodate different groups of developers. These tracks include the Standard track, which is launching today, while the Business and Academic/Research tracks will arrive soon. Within each track there will also be Basic, Elevated or Custom access levels available.

“We definitely know that one size does not fit all, and we wanted to make it easier for more developers to be successful building with us,” explains Twitter Developer Platform product head, Ian Cairns. One of those tracks will always be free, he added. “Twitter exists to serve the public conversation, and keeping a free, open API is really important to us,” he said.

The Standard track’s Basic access level will always be free, Twitter says, and is designed for developers just starting out. 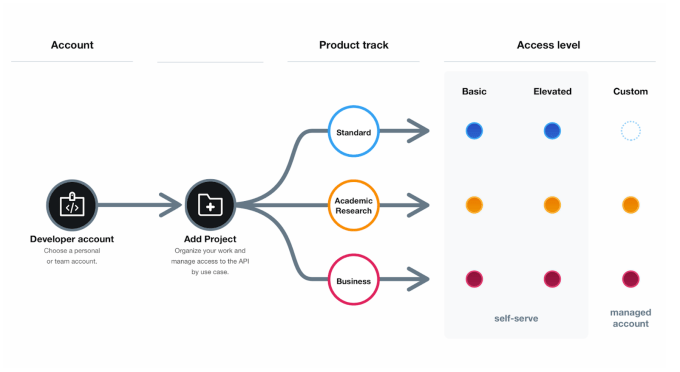 The company hasn’t finalized its pricing for other tiers but says through its conversations with developers, it has come to understand how its pricing and its rate limit model were limiting developers, particularly researchers and those building for fun. The new pricing is expected to take different types of developer needs into consideration, and will offer free and paid tiers within the Elevated level within the Academic Research track.

This is an area where Twitter has a complicated history, as it has in the past pulled out the rug from under the feet of developers building alternative Twitter clients and even shafted its own partners. Twitter today defines the use cases it’s aiming to support as those offering things like “social prediction of future product trends, AI-powered consumer insights, and FinTech market intelligence,” such as Black Swan, Spiketrap, and Social Market Analytics.

However, Twitter clarified in a call with press that it has spoken with the makers of third-party clients to figure out how it can better work with them in the future, and noted it’s not changing any policy related to its support right now. Those clients will also be able use the new features in v2. The company still has not said, clearly and definitively, that it has no plans to change how these businesses today operate.

Instead, Twitter explained to TechCrunch it believes these clients “deserve clarity on how to operate” with the new API. But this clarity may require Twitter to take a fresh look at its policy and product access details, Twitter said, adding it’s looking ahead to determine how to best work with this group. Given the API has been in development for more than a year, this is a disappointing answer for Twitter’s power users who prefer third-party clients, like Tweetbot, Twitterific, Echofon and others. Twitter has had plenty of time to take that “fresh look,” and has still not made a decision, it seems.

In addition, the Business API will serve Twitter Official Partners like Brandwatch, Sprinklr and Sprout Social, and Twitter’s enterprise data customers. This track in the future will include Elevated and Custom access to relevant endpoints.

Developers are today using Twitter data to research a range of topics, like people’s attitudes about COVID-19, the social impact of floods and climate change and the prevalence of hate speech online. This will also later add Elevated and Custom access to relevant endpoints, and will be the first time Twitter has built a product tailored toward researchers’ specific needs, it says.

Of all these, only the Standard API product is ready to ship next week, with a new set of features offered for free at the Basic level. Its launch will be followed by the Academic/Research product track, and Twitter will then continue to release the new API incrementally in the months ahead. It will take some time to shift developers from v1.1 to v2, however, so Twitter’s API roadmap and documentation can help guide them as to when changes will occur.

Twitter “firehose” data (the full stream) will continue to be available only in limited partnerships, as today. Twitter says most developers don’t want this, even when they have high-data access needs, because firehose data is difficult to work with. 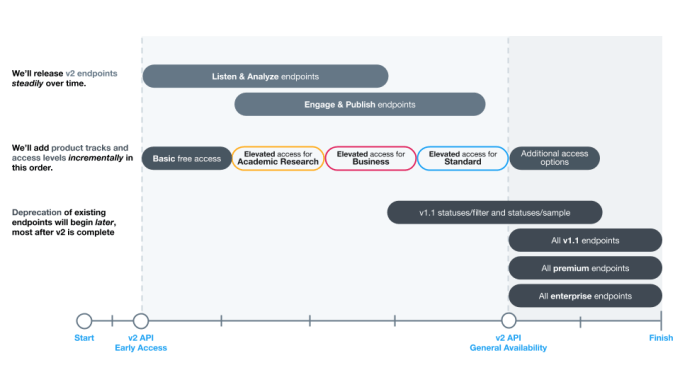 The company says the decision to rebuild its developer platform came about because Twitter needs to more easily scale a large number of API endpoints for both planned and new functionality going forward. (Perhaps related: a Twitter job description that mentioned its plans to “build a subscription platform.” That could require a new API?)

In the current version of the API, endpoints are implemented by a large set of HTTP microservices — a decision Twitter made when it re-architectured from Ruby in 2013. This ended up creating a disjointed product where independent teams worked on their endpoints without coordinating with others. 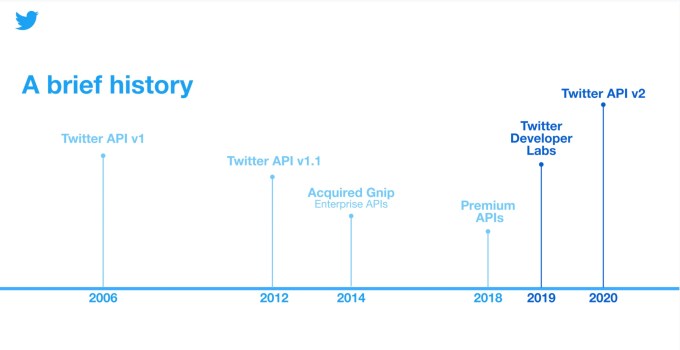 Twitter has been testing new API features for over a year as part of its Twitter Developer Labs program, a shift toward building in public. This change allowed the company to gain real-time feedback from the developer community as the product was built in the open. Developers told Twitter they wanted better documentation, access to an engaged community, a sandbox for testing, easier onboarding and other features.

Twitter specifically responded to these requests for a new developer portal, which has also been redesigned. The portal will offer an onboarding wizard to simplify getting API keys. The portal also allows developers to manage their apps, understand their API usage and limits, access a new support center, find documentation and more. Developers will additionally be able to view Twitter’s public roadmap and read through a forthcoming “Guide to the future of the Twitter API,” which arrives next week when v2 launches, for more about what to expect.

Next week, Twitter will launch “Early Access” to an initial set of new endpoints. Unlike Twitter Developer Labs, Early Access will be production-ready and fully supported. The new endpoints will allow developers to stream tweets in real time, analyze past conversations, measure Tweet performance, listen for important events and explore tweets from any account. In later weeks, Twitter will decide which other new features it may move to the API — like voice tweets or allowing only select audiences to reply to your tweets, for example.

“Our intent is to provide plenty of migration time — along with resources to help — when we deprecate existing endpoints. We know migrations can be challenging and we’re committed to doing our part to make migrating to our new API as easy as we can,” a spokesperson said.

There will be some exceptions, however. For instance, later this year, Twitter will announce a shorter deprecation window for v1.1 status/sample and statues/filter endpoints. Their replacements are rolling out next week in v2.

Developers can get started with Early Access by way of the Developer Portal, when the API v2 launches.