At its virtual Cloud Next ’20 event, Google today announced a number of updates to its cloud portfolio, but the private alpha launch of BigQuery Omni is probably the highlight of this year’s event. Powered by Google Cloud’s Anthos hybrid-cloud platform, BigQuery Omni allows developers to use the BigQuery engine to analyze data that sits in multiple clouds, including those of Google Cloud competitors like AWS and Microsoft Azure — though for now, the service only supports AWS, with Azure support coming later.

Using a unified interface, developers can analyze this data locally without having to move data sets between platforms.

“Our customers store petabytes of information in BigQuery, with the knowledge that it is safe and that it’s protected,” said Debanjan Saha, the GM and VP of Engineering for Data Analytics at Google Cloud, in a press conference ahead of today’s announcement. “A lot of our customers do many different types of analytics in BigQuery. For example, they use the built-in machine learning capabilities to run real-time analytics and predictive analytics. […] A lot of our customers who are very excited about using BigQuery in GCP are also asking, ‘how can they extend the use of BigQuery to other clouds?’ ” 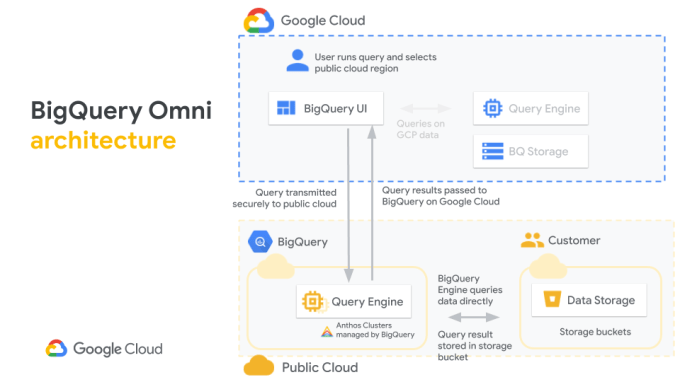 Google has long said that it believes that multi-cloud is the future — something that most of its competitors would probably agree with, though they all would obviously like you to use their tools, even if the data sits in other clouds or is generated off-platform. It’s the tools and services that help businesses to make use of all of this data, after all, where the different vendors can differentiate themselves from each other. Maybe it’s no surprise then, given Google Cloud’s expertise in data analytics, that BigQuery is now joining the multi-cloud fray. 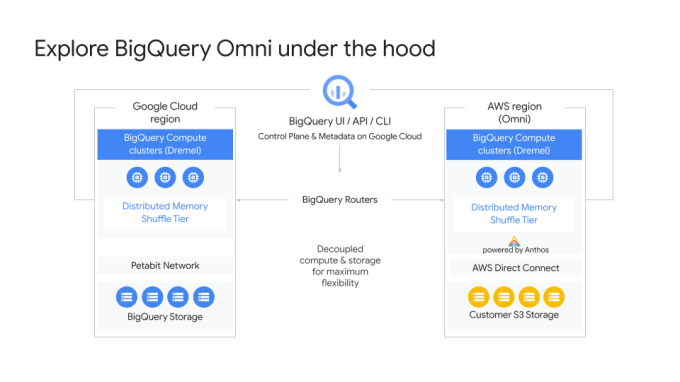 He noted that Google Cloud believes that this will help enterprises break down their data silos and gain new insights into their data, all while allowing developers and analysts to use a standard SQL interface.

Today’s announcement is also a good example of how Google’s bet on Anthos is paying off by making it easier for the company to not just allow its customers to manage their multi-cloud deployments but also to extend the reach of its own products across clouds. This also explains why BigQuery Omni isn’t available for Azure yet, given that Anthos for Azure is still in preview, while AWS support became generally available in April.